These minuscule beasties can wreak havoc across animal species (and your veterinary clients, too). Here are tips to stop 'em.

Toxoplasma and Neospora species are transmitted in a variety of ways and can affect a wide range of victims, from livestock to pets to your very clients. CVC educator Richard Gerhold, DVM, MS, PhD, has advice on combating the spread of these species. Watch the video or read the transcript below.

"So, some of the things that people can do to help limit that disease-whether it be Toxoplasma, which is a human disease, or Neospora, which is not a human disease, but can affect livestock and cause abortion in livestock-is to do a couple things. You can try and make areas unattractive for wild animals to come into by not leaving pet food out, by not leaving compost piles uncovered-that can be an easy food source for them.

"Another really simple but absolutely humongous thing that veterinarians can do to limit Toxoplasma is encourage owners to keep their cats indoors. That's very simple and it does a couple things, actually. It protects the cats. There are some really horrible parasites that cats get-Cytauxzoon is one them that's like the feline malaria, very deadly. It also prevents them from shedding Toxoplasma into the environment.

"Similar with Neospora, if you have livestock farms you want to keep wild canids or your domestic animals from eating the afterbirth of a cow that had calves. That's a great way to transmit it. Also, initially I thought it wasn't a big deal but raw food diets have taken off whether for dogs or cats and that's actually a great way to transmit Toxoplasma for cats or Neospora for dogs. Do not feed raw meat diets to them.

"When it comes to coccidia, they're actually a kind of a unique group. Most species have their own species-specific coccidia. So in other words, a coccidia species of dogs is not going to affect cats; the ones of chickens do not get into turkeys. It's not always true, but for most part it is.

"So the biggest thing [clients] can do there is try not to have a lot of different age groups. Generally, it's the young animals affected by coccidia but the older ones could be shedding it. So try to separate animals' age groups.

"Also, decrease density of animals. Coccidia is probably one of the biggest concerns for commercial poultry because they can have 30,000 birds in one house, and if we didn't have a way to control that, we actually wouldn't have poultry the way that we have it today. So decrease density. Then in certain cases, especially for livestock, you can have them on some type of anticoccidial feed additive. Because once an outbreak occurs in livestock it's actually too late." 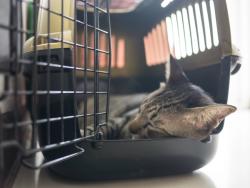