Clinical case study: The case of the missing gallbladder

This clinical case explains how a 10-month-old dog was diagnosed with a rare condition—gallbladder agenesis—and how it will be monitored in the future.

Abby, a 10-month-old female pure Maltese terrier, was referred to Queensland Veterinary Specialists in March 2021 for an investigation of her persistently elevated ALT enzyme levels, which had been detected via blood tests performed by her primary veterinarian.

Blood tests performed in November 2020, prior to her sterilization surgery, showed that Abby had an ALT level of 230U/L. Although at birth she had been the smallest pup in her litter, she had grown well and was physically healthy. There had been no changes in her demeanor, energy levels, appetite, or water intake.

A complete physical examination and CBC and biochemistry performed at both visits to the primary care veterinarian showed no other significant findings.

Abby’s ALT level reduced to 208 U/L by day 14 of the treatment trial but increased to 382 U/L 14 days after discontinuing the antibiotic therapy. Abby and her very dedicated family therefore made the 1600-km car trip from Cairns to Brisbane for further assessment and testing.

At the time of referral, Abby remained clinically well, with excellent energy levels and appetite. A physical and neurological examination performed by an internal medicine specialist at Queensland Veterinary Specialists was within normal limits. Abby underwent an abdominal CT scan with contrast because our primary concern was to investigate macrovascular or microvascular disease.

The imaging showed that Abby’s vasculature was normal, as was the liver, but surprisingly, she didn’t have a gallbladder!

Bile is formed in the hepatocytes and is stored in the gallbladder. Contraction of the gallbladder is stimulated by the entry of fats and proteins into the small intestine. The bile passes through the common bile duct into the duodenum, where it helps to emulsify fat, neutralize gastric acid, and facilitate cholesterol excretion. Because the gallbladder acts as storage, not production, patients without gallbladders can lead perfectly normal lives. In the absence of a gallbladder, the bile produced is consistently secreted into the duodenum instead of being stored and then released upon eating.

A review of the literature of gallbladder agenesis in dogs found that the most common biochemical change was an elevated ALT (15/17 dogs).1 It also found common bile duct dilation in 12 of the 17 dogs, with no evidence of bile duct obstruction. No dogs had hyperbilirubinemia.

Nine of the dogs in the review were symptomatic for hepatobiliary disease, with vomiting being the most common clinical sign (56%) and other signs including anorexia, diarrhea, ascites, lethargy, and seizures. As with Abby, the remaining 8 patients found to have gall bladder agenesis were asymptomatic and were referred for abnormalities found on routine bloodwork.

Therefore, incisional liver biopsy samples were obtained during Abby’s sterilization surgery, which was performed the day after the CT scan. During this procedure, it was confirmed that there was no gallbladder present, just a small remnant of tissue in the normal location of the gallbladder, most consistent with a thickened duct.

The liver biopsy samples were submitted to the local veterinary pathology laboratory, QML Vetnostics. Histological examination showed no evidence of microvascular or hepatic disease, the copper levels were normal, and the culture was negative for any bacterial growth, leaving the absence of the gallbladder as the most likely cause of Abby’s elevated ALT level.

In previously reported cases of gallbladder agenesis in dogs, those dogs with ductal plate malformation had a shorter survival time, so we are pleased that Abby’s liver biopsies were normal.

Because Abby was asymptomatic with no other concurrent disease evident, treatment was not required; however, we have recommended that her liver enzymes be monitored every 6 months and bile acids every 12 months.

Since returning home to Cairns, Abby has continued to grow and put on weight, and her family says she is a very happy dog! We hope that Abby will remain asymptomatic and have many happy years ahead of her. 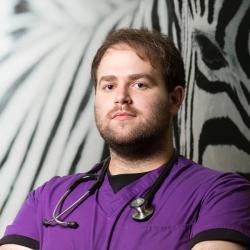