Canine otitis: Treatment advice from the ear tip to the tympanic membrane

How to achieve an optimal outcome in veterinary patients with ear infections or allergic conditions.

After treating countless canine patients with otitis externa over the years, I've arrived at a few fundamentals that all practitioners can benefit from. Review these quick pointers before your next otitis case.

First, do a hearing evaluation

I always establish whether a dog with chronic otitis can hear since this may change my approach to a case. If hearing loss seems permanent and nonreversible, then total ear canal ablation and bulla osteotomy become better treatment options. Hearing loss is the main side effect of these procedures, so if hearing loss were not an issue I would spend less time and expense trying medical therapy. In addition, hearing needs to be assessed before ear flushing and administering topical medications when otitis media is likely.

It surprises me how often dogs have fairly apparent hearing loss or deafness, yet the owners are not aware of it. This is especially common in a multi-pet household. It is important to ask the owner about the pet's response to doors, cars pulling up, and being called when outside and its ability to localize the sound, as well as whether the pet sleeps soundly and anything else that will help determine whether marked hearing loss has occurred.

When assessing hearing in the examination room, make sounds when the dog is not paying attention to you. It is important to not just see the dog respond to the sound but to determine whether it almost immediately localizes where the sound comes from.

A client communication or perception problem may occur if a near deaf or deaf dog is not recognized in the examination room and then the owner is warned about deafness as a side effect to the deep ear flush and the treatment prescribed for use at home. After the procedure or treatment, the client pays closer attention and recognizes the dog does not hear well and blames the treatment when in fact the dog had been deaf before the treatment.

Brainstem auditory evoked response (BAER) testing is a more accurate way of assessing a patient's hearing. This test allows one to assess hearing threshold, the level of sound that each ear detects. Unfortunately, it is not readily available.

Dilate the ear for cleaning

In patients with proliferative, end-stage otitis, it is difficult to impossible to get cleansers deep into the ear canal. To achieve this when a dog is anesthetized, use a 3-mm otoscope cone to dilate the ear and place the cone as far into the canal as possible. You can pass an ear loop down the canal just past the tip of the cone and then fill the cone with cleanser and slowly pull the cone out. This allows a layer of cleanser to be deposited on many canal folds as they fall back in place as the cone is removed.

Topical glucocorticoids are the most common prescription drug used in treating ear disease, which makes sense because the most common causes of chronic otitis are allergic diseases (e.g. atopy, adverse food reaction). Even ear mites can stimulate an allergic reaction.

In addition, many patients with otitis have secondary bacterial or Malassezia species infections, and topical glucocorticoids may improve the response to topical antimicrobials. This has been shown in dogs with Malassezia species otitis,1 and is supported by the fact that most topical antibiotics labeled for the treatment of otitis in veterinary patients contain a glucocorticoid.

Eliminating or decreasing inflammation in the ear canal is an essential component of treating secondary infections and helps control the primary allergic disease as well. Thus, the real question is when you should avoid using them. I do not use glucocorticoids in patients with otitis when:

1. Cleaning the ears alone is effective

2. Infections are not responding to treatment

3. Ulcers are not healing even though infection appears to be controlled.

Glucocorticoids available for topical use in veterinary patients are-from generally the least to most potent-1% hydrocortisone, 0.015% triamcinolone, 0.1% triamcinolone, 0.1% betamethasone, 0.1% dexamethasone, 0.1% fluocinolone acetonide and 0.1% mometasone furoate. During initial therapy for or acute exacerbations of otitis, a potent topical glucocorticoid may be required, but once the inflammation or allergic reaction is controlled use the least potent topical glucocorticoid possible that is still effective prophylactically or long-term. In cases of atopy or food allergy-induced otitis externa, the pinna is frequently affected and should also be treated.

Combinations of medications may be helpful in eliminating resistant bacteria. Three different topical agents-antiseptics, synergistic agents and topical antibiotics-may be used to kill the resistant bacteria. The ear can be cleaned with an antiseptic, and then the topical treatment may contain both a synergist (such as Tris-EDTA or miconazole) along with an antibiotic.

Antibiotics. In one study of 16 dogs with Pseudomonas species otitis externa that were treated empirically, 90% of the dogs with a resistant bacterial infection responded to a topical antibiotic that the organism was reported as resistant to, and 83% of the dogs responded when the empiric treatment involved an antibiotic that that bacteria was reported as being sensitive to.2 The favorable response may have been due to the combination approach since the ears were cleaned and antiseptic and the synergistic agent Tris-EDTA were used as well as because of the high antibiotic concentration achieved at the site of infection with topical formulations.

Antiseptics. Topical antiseptics include such ingredients as certain acids (acetic, boric, citric, lactic), alcohols, aluminum hydroxide, chlorhexidine (0.25% or lower concentration), povidone-iodine, silver sulfadiazine and sodium chlorite. Micronized silver is a newer addition to veterinary topical antibacterial solutions. Antiseptics kill organisms by methods other than antibiotics, generally are inexpensive and can work in conjunction with antibiotics. Microbial resistance to antiseptics is generally not a problem, though this may be changing, which is another reason to use combination therapy. Some ingredients that look promising for destroying biofilms are chlorhexidine, acetic acid, and Tris-EDTA, N-acetyl-L-cysteine, silver and sulfhydryl compounds.3-6

In cases resistant to all antibiotics, antiseptics may be the treatment of choice. The drawback to using antiseptics is they often need to have contact time in clean ears and be used multiple times a day. Some are also irritating, which limits their use. The antiseptic should be left in the ear canal for five minutes. In difficult cases in which the ears are being cleaned under sedation or anesthesia, I may leave acetic or boric acid in the ear canal for five minutes and then follow with a five-minute soak with Tris-EDTA and chlorhexidine. When antiseptics are the only topical antibacterial used, then they often should be applied four to six times a day.

Synergist agents. Synergistic agents enhance the bactericidal effect of the agent they are mixed with to a greater extent than the additive effect of the two ingredients. Tris-EDTA is the synergist used the most in veterinary patients with otitis. It enhances the effects of antibiotics as well as the low, safe concentration (0.15%) antiseptic chlorhexidine.7,8

Use a few precautions for repetitive ear flushes

Since many patients with chronic end-stage otitis will require multiple ear flushes in the clinic, it is common to encounter clients reluctant to allow repeated general anesthetic episodes. Instead, it is common to use sedatives and analgesics. In these cases, even though a patient's laryngeal reflex may be present, it can be suppressed, so take precautions to prevent inhalation pneumonia and avoid spreading resistant Pseudomonas species and methicillin-resistant Staphylococcus species to the lungs.

So remember-any time you flush an ear with access into the middle ear (a ruptured tympanic membrane) in a sedated dog and an endotracheal tube is not in place, the dog's head should be angled down as the flush can go through the auditory tube to the back of the throat and be aspirated. For example, we raise the racks on the wet table at one end and the dog is positioned in lateral recumbency with its nose at the low end of the rack.

In patients with possible resistant Malassezia species, posaconazole is reported to be more effective than other antifungals, though the increased potency has varied.12,13 Miconazole is most often found at 1%, but when treating difficult cases, higher concentrations-2.3% (Surolan-Elanco)or 1.5% (Easotic-Virbac)-would achieve higher concentrations in the ear and may be more effective. Also as stated above, polymyxin is synergistic with miconazole for killing Malassezia species. The newest addition to the active agents for Malassezia species infections is 1% terbinafine in the new combination weekly product, Osurnia (Elanco).

Do not discontinue antiseptic, antibiotic or antifungal topical therapy until cytologic examination shows no inflammatory cells or DNA strands. It is common for practitioners or clients to discontinue therapy too early, especially if the ear looks reasonably good and there is no obvious odor or discharge. I see many cases when I think it is time to discontinue treatment, but because of the results of cytologic examination, I continue. Be sure to caution owners to expect that based on cytology, treatment may need to continue despite the ear looking better, and if all is clear they will be pleased and think you-or they-did a better job than expected.

12. Bourdeau P, Marchand AM, Etoré F. In vitro activity of posaconazole and other antifungals against Malassezia pachydermatis isolated from dogs. Vet Dermatol 2004;15(s):46. 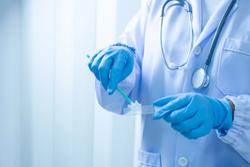