The California Veterinary Medical Association (CVMA) has named Linda Markland, RVT, the 2012 Registered Veterinary Technician (RVT) of the Year in Non-Private Practice. Markland has worked in the veterinary industry for more than 30 years and currently serves as the Senior Veterinary Education Specialist for Veterinary Pet Insurance Co. (VPI). She’ll commemorate her twentieth anniversary with the company later this year.

CVMA awards the candidate that best exemplifies a progressive RVT, utilizes his or her talents to the fullest potential, and distinguishes the importance of his or her education, certification and professional responsibilities. The CVMA Board of Governors unanimously chose Markland.“This accolade is well-deserved and is a testament to Linda’s passion for the profession and dedication to her work,” says Carol McConnell, DVM, MBA, vice president and chief veterinary medical officer for VPI. “Her commitment to help industry counterparts is unparalleled and is an inspiration to not only all of us at VPI, but to the entire veterinary community.”

“To be nominated from a pool of 173 eligible CVMA members was beyond an honor,” Markland says. “However, to actually win this award was more than I ever could imagine. I’m thankful to all of my industry counterparts who value my contributions and have been so supportive over the last 30 years.”

Markland is the seventeenth recipient of the RVT of the Year in Non-Private Practice Award. The CVMA will present the award at its 2012 Pacific Veterinary Conference on June 29. 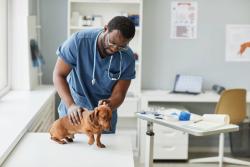