Some cases of pyoderma will inevitably require flexibility with regard to a pet owner’s budget and treatment preferences.

According to Jacquelyn Campbell, DVM, DACVD, from Animal Allergy and Dermatology of Colorado in Colorado Springs, veterinarians should use a best practice approach to managing dermatologic disease in small animals. However, some cases will inevitably require flexibility with regard to a pet owner’s budget and treatment preferences.

Presenting at the 2018 AVMA Convention in Denver, Colorado, Dr. Campbell shared her case-based approach to such cases in dogs and cats. She highlighted the management of a 5-year-old, neutered, male, mixed-breed dog that ultimately received a diagnosis of superficial pyoderma—one of the most common skin conditions that veterinarians treat.

The dog had a 2-month history of dermatitis, and a groomer had expressed concern about the possibility of ringworm. However, the dog’s owners were unaffected, and had no skin lesions themselves. Additionally, the dog was not receiving any parasite prevention medications, and had no previous history of skin disease.

Upon examination of the skin, Dr. Campbell found circular, yellow crusts on the body, with epidermal collarettes, hyperpigmentation, and hair loss.

Based on these lesions, her diagnostic approach involved taking a deep skin scraping (repeatedly scraping the same area of affected skin until blood is drawn) to check for Demodex mites, and performing tape-strip cytology of the skin lesions. This superficial cytology preparation is also a sensitive method for recovering Demodex mites, she said, and some studies have suggested that it may be even more sensitive than a deep skin scraping for this purpose. “I like to use both,” Dr. Campbell said. But, she also mentioned that tape cytology may be especially useful in cases whose owners who prefer to avoid a deep skin scraping because they do not like to see their dog bleed.

In this dog’s case, there was no evidence of Demodex infestation, but Dr. Campbell found bacteria and neutrophils on cytologic examination. Skin should not contain white blood cells, she said, so the presence of neutrophils indicates a skin infection, consistent with superficial pyoderma.

However, Dr. Campbell stressed, healthy dogs do not develop skin infections. So, when you diagnose a case of superficial pyoderma, you should always look for an underlying cause, she said.

This was the dog’s first episode of superficial pyoderma. In first cases like this, Dr. Campbell said she typically at least checks for, and treats, underlying parasitic infestation, but otherwise does not perform an extensive diagnostic workup to investigate the underlying cause. Most owners, she noted, prefer to simply treat the infection and avoid an extensive workup, she explained.

When making treatment decisions for a patient, Dr. Campbell advised veterinarians to discuss the options with the owner, especially because differences in cost among antibiotics may be substantial. Some owners may choose a veterinarian’s preferred first-line antibiotic, regardless of cost, she said, but others may prefer a less costly alternative that might also be a very good option.

She emphasized that any chosen antibiotic should be administered at the appropriate dose for the appropriate duration of time to achieve complete resolution. Veterinarians should continue the antibiotic therapy for superficial pyoderma for 1 week beyond the point of complete resolution of clinical signs—“this is for at least 21 days,” she said, “and sometimes 30 days.” The patient should also be re-examined before the antibiotic course ends, to ensure the infection is resolving.

However, if there is a history of recurrent pyoderma, Dr. Campbell prefers to take a more aggressive approach to the diagnostic workup to determine the underlying cause of the infection. Although any dermatologic disease can result in secondary skin infection, she highlighted some common triggers to investigate, including other forms of hypersensitivity (such as atopy, food allergy, and dermatophyte infestation). Less commonly, veterinarians may need to investigate the possibility of underlying endocrine disease, she concluded.

Dr. Parry, a board-certified veterinary pathologist, graduated from the University of Liverpool in 1997. After 13 years in academia, she founded Midwest Veterinary Pathology, LLC, where she now works as a private consultant. Dr. Parry writes regularly for veterinary organizations and publications. 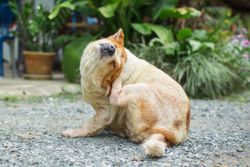