Are you fluent in dog?

This month debuts a renewed focus on behavior medicine by addressing signaling. The goal is to teach a species and contextual approach that harks back to my roots as someone who was classically trained in ethology and evolutionary biology.

Before you can understand canine behavioral pathology, you have to understand "normal" behavior.

While normal is often difficult to define, if we look at messages and meanings in signals we have to worry less about this, and we will be able to note earlier in an interaction sequence or a relationship when something seems amiss.

To teach the basics, I'll discuss numerous contextual interpretations for various canine and feline signals using photos of people's pet animals. We'll start with dogs and facial signals, and eventually work our way down the body and then onto cats.

Photo 1: This black Labrador, with his ears cocked and his mouth hanging open, displays what is often called a deferential grin or grimace.

When you first look at a dog's face you are actually seeing a complex and integrated set of signal systems that become what we call the "facial expression".

The components of this, each of which is important to understand separately, are the ears, the eyes, the nose, the mouth/lips, the teeth, and the set of the head relative to the neck. All of these body parts can move and activity, size and relative position are all factors in interpreting what the signaler is conveying.

Except in really extreme, urgent situations, few signals overwhelm all others. Instead there is a cohesive interaction or integration that involves signaling redundancy.

The more important a signal is, or the more help it needs to be clear, the more likely that the signal contains redundant components. In other words, the message conveyed by the posture of the ears is also conveyed by the position of the mouth. When something is remiss socially, it is not unusual to have a mismatch, and this may be the first clue to a practitioner or client that there may be some developing interaction problems.

For this series, each photo or set of photos will be accompanied by explanations that try to show how the signals should be read in context. Practitioners who have questions are encouraged to write and ask them, and to send photos accompanied by descriptions/questions of their own for discussion.

Photo 1a: Ears forward and head tilted indicate a willingness to interact.

A lot has been written about "staring" in canines, and a lot of it is wrong. Direct eye contact is one of the most important signals mammals have. Domestic dogs are the product of as much as 135,000 years of co-evolution with an emphasis on the development of breeds that perform or are suited to perform specific jobs or tasks in the last 12,000-15,000 years.

Accordingly, we should be able to signal clearly to dogs by looking at them, and vice versa. Staring is only problematic when pupils dilate, the muscles around the eyes contract, and the remainder of the head and body postures change to a more agonistic, aggressive stance. Rather than viewing staring as aggressive, we should consider what a direct look can convey.

In photo 1, we see a black Labrador who is looking directly at the camera, with his ears cocked, and his mouth hanging open in what is often called a deferential grin or grimace. His lower jaw is relatively loose, but not flaccid, his canines are largely sheathed, but his incisors are not covered by his lower lip (indicating that the lip hasn't tightened). His ears are forward signaling a willingness to communicate and solicit information about what will happen next in the interaction, and his head is at a slight angle to his body.

He is sitting, which is important. Sitting can act as a "stop" signal in dogs, and some dogs truly appear unable to hear - or at least listen - unless their butt is on the ground.

Many of these dogs are young, eager, active, joyous Labradors. This chap is waiting to know what interaction will come next and is happy to engage at whatever pace is set. In this guy's case, his pupils are dilated. Context is critical for the interpretation of any behavioral signal: not only have I used a flash to take the photo, but this chap is older and has developed lenticular clouding.

In Photo 1a we see a Golden Retriever that is looking directly at the camera, ears forward, head slightly on a tilt, but unlike the Labrador, her mouth is not loose. The slight tightness in her mouth and jaw indicates that she is less relaxed than she could be, perhaps because she is uncertain why she has to stand for a photograph. Because her ears are somewhat forward and her head is tilted, this indicates a willingness to pursue the interaction, and as she becomes more comfortable with the interaction, her ears will come more fully forward and her jaw will relax.

In photo 2, note how the pelage of the breed changes. This is how an inquisitive, willing look appears. This Tibetan Spaniel is sitting up a little straighter than a comparable Labrador would, but her ears are cocked, she is looking directly at the person speaking to her, and her body is also in "stop" mode while she is paying attention. These dogs are waiting to learn what is next, and are very willing to interact in the upcoming situation. Some people might think that the Tibbie is a little more alert and "on" in comparison to the Labrador because of conformational changes with the breed: Tibbies have short necks.

When they look alert, their shoulders go with them, in contrast to the Labrador.

In photo 3, we see the same basic posture in a very keen dog of a working breed. This dog is set for action (and the wet coat suggests that some action has already occurred).

What makes her signal a greater level of activity with her interaction than we see for the dogs in the first three photos? First, note that her ears are cocked and out a little bit - they are not glued to her head. The cocking of the ears with some lateral motion is a common signal that the dog is or is about to be very active and very interactive. This dog's mouth is also open, very much like the Labrador's, but her tongue is out further.

Photo 3: The same inquisitive behaviors noted in Photos 1, (p.1S) 1a and 2 are included with this working breed. This dog is ready for action.

In this case the protruding tongue is due both to thermoregulation and to anticipation. When dogs anticipate an activity that requires energetically expensive movement they will dilate their pupils, put their tongue out, and breathe more deeply.

This dog is also focusing on something or someone in the distance. Finally, although her head is turned in a manner similar to the Labrador in Photo 1, she is not sitting down. In fact, she is up and ready to go.

She is pausing only to change activities. In this case, the change involved chasing through a stream, to focusing on and deciding to chase another dog as part of an extended play session. Although the facial expressions in Photos 1-3 are all somewhat different, in each case the dog has signaled a willingness to engage in an activity that is determined externally.

The amount of focus the dog shows is also something that factors into anticipating the behaviors that are to come. In Photo 4, the Border Collie is focusing intensely on a fake sheepskin toy. The dog is staring at the toy, but in a much more extreme and pronounced manner than the dog in photo 3 is staring at the dog out of the frame of the photo. Also, the pattern of ears moving laterally is exaggerated here. The ears are cocked, but are now at a 90-degree angle to the head: something seen in dogs that are fiercely concentrating.

Photo 4: This Border Collie is showing signs of intense concentration. These animals can tune out the outside world because they are so focused on their activity or goal.

These dogs will often tune out the outside world because they are so focused on their activity or goal. Note that this dog's brow ridge is very prominent: as the dog stare muscle contract has occurred, providing a clearly defined eyebrow region.

Again, this is common in dogs that are very focused and stimulated. Note, finally, that this dog's mouth is shut. The dog is very still, and relatively rigid in this photo. He is stalking the toy, giving "eye", as Border Collies are wont to do. Were his sheepskin alive, the meaning of the signal would be unmistakable: chase.

This predictability is part of the function of signals, and some breed-typical ones have become stereotypical as we have selected for relatively invariant behaviors.

For dogs that are mixed breeds, as in Photo 5, a more attenuated form of the focus exhibited by the dog in Photo 4 can be apparent when the dog is intently engaged in an interaction, especially one where anticipation of a subsequent action plays a role. Here, that anticipation is about what will happen when the dog bats the toy. Note here that the dog has cocked ears spread laterally - a true signal of the intensity of the focus.

Engaged in an interaction

His mouth is open: he is both playing aerobically, and he is anticipating the next move, while signaling that this forceful activity is all in play. The fact that another dog is not right next to him doesn't matter. Other dogs are present, and it's important to ensure that one is correctly signaling when one is engaged in rough play vs. attack if one is a canid. Note also that this dog is playing with both his mouth and his foot - many dogs have "soccer" skills and that his exuberant joyous play is unencumbered by his correctly fit Gentle Leader® Canine Head Collar.

Photo 5: This dog is also intently focused on an interaction, especially one where anticipation of a subsequent action plays a role. Here, that anticipation is about what will happen when the dog bats a toy.

In our last photo (Photo 6), we see another lab who has cocked ears, is holding a toy is focused on something internal (e.g., playing with and chewing on the toy), and who is demonstrating a firm, but non-threatening grip. Her mouth is sufficiently lax that she is not squishing her toy, but also so that the bottom jaw and lower mouth are visible.

Her eyebrows are not wrinkled, and she seems unconcerned about any imminent theft of her toy. Of course, she is on a lead, and she is standing just in case any other pup in the room is entertaining theft of the toy.

In fact, our girl is ideally positioned to solicit and engage in an energetic game of "chase".

In the next article, we'll continue with interpretations of facial expression. Meanwhile, notice how knowing a few things about the integration of ear posture, mouth position, and eyes and their affiliated structures, changes the way we look at these dogs. Altering your world view is often the first step toward understanding.

Photo 6: This Labrador is holding a toy and is focused on something internal (e.g., playing with and chewing on the toy). Notice the animal, with cocked ears, is demonstrating a firm, but non-threatening grip. 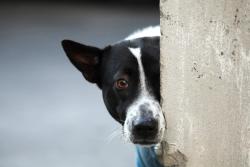