The ABCs of veterinary dentistry: U is for ulcers—what a pain!

Treating these painful lesions in dogs and cats requires figuring out what's causing them.

An ulcer is a tissue defect that has penetrated the border between epithelium and connective tissue. Its base is located deep in the submucosa or even within muscle or bone. An oral ulcer is a break in the mucous membrane with loss of surface tissue and necrosis of epithelial tissue. It is a deeper breach of epithelium than an erosion or excoriation, involving damage to both epithelium and lamina propria (Figure 1).

Figure 1. Superficial and deep ulceration in a dog's mouth. All images courtesy of Dr. Jan Bellows.Oral ulcers in dogs and cats are painful to the patient and often challenging to the veterinarian who has to figure out what to do about them to eliminate suffering.

Clients rarely notice their dog's or cat's oral ulcerations. If the lesions were on the tip of their pet's nostrils, they'd be on your office doorstep in a minute. More often it's the veterinarian or technician who finds ulcers either during an exam room check or when the patient is under anesthesia.

The most commonly affected oral tissues include the oral mucosa, the palatal mucosa, the lip margins and the vestibules (areas between the teeth, lips and cheeks) (Figures 2A-2C). Some dogs and cats with oral ulcerations show excessive drooling (Figure 2D), halitosis and a history of pain when eating. Unfortunately, most do not show any clinical signs, suffering silently.

Figure 2A. A rodent ulcer affecting a cat's lip.

Figure 2D. Ptyalism secondary to oral ulcers.Next: Discover the proximate cause of the ulcer

Oral ulcers arise from either inside or outside causes.

Figure 3A. Marked ulceration on a cat's tongue secondary to calicivirus and feline leukemia virus.

Figure 3B. Vestibular ulceration secondary to squamous cell carcinoma.Outside (other than organic) causes. Contact ulcers occur secondary to direct mucosal interaction with an irritant, allergen or antigen (Figure 4). Contact mucositis with ulceration is most commonly observed where the labial, buccal or lingual mucosa touches a prominent tooth surface in susceptible dogs or, more rarely, in cats. They have also been referred to as kissing ulcers, kissing lesions and chronic ulcerative paradental stomatitis (CUPS) lesions.

Figure 4A. Contact mucositis with ulceration affecting a dog's maxillary canines and incisors.

Figure 4B. Pseudomembrane formation over ulcer secondary to a hypersensitive reaction to plaque.

Figure 4D. Contralateral side in the same dog as in Figure 4C where ulceration has eroded through all layers of the mucosa, submucosa and epidermis.

Figure 4E. Ulcers on a dog's tongue after contact with bleach.Treatment

Ulcers are wounds. Their persistence depends on their etiology and the animal's ability to self- repair. Treatment of oral ulcers involves eliminating the cause, allowing re-epithelization to occur. Topical medicaments with zinc ascorbate and zinc gluconate (such as Maxi/Guard Oral Cleansing Gel-Addison Biological Laboratory) help stimulate collagen production, which is part of the healing process. The antimicrobial properties of zinc ascorbate help control infection. Other therapies include tooth extraction to eliminate mechanical irritation, short-term use of systemic anti-inflammatories and antimicrobials, and CO2 laser.

In cases of ulcers caused by plaque-laden tooth contact with the alveolar mucosa (Figure 5A), initial treatment involves dental scaling and polishing followed by scrupulous home care administered twice daily. Daily application of OraVet Plaque Prevention Gel (Boehringer Ingelheim) is advised to create a barrier between the tooth and mucosa. Unfortunately, this does not usually eliminate the ulcers, necessitating extraction of teeth (Figures 5B, 5C).

Figure 5A. Marked ulceration secondary to plaque hypersensitivity in a Maltese dog.

Figure 5C. Resolution of ulceration after full-mouth extraction.The use of a CO2 laser to photovaporize oral ulcers has been met with favorable results. The process decreases pain and the bacterial load, leaving a “Band-Aid” char covering exposed tissue. The laser is set between 3 and 6 watts in continuous mode, and the ulcer is slowly circumscribed by gradually focusing on the lesion until the entire ulcer is “painted” with light energy (Figure 6).

Figure 6A. CO2 laser treatment of a localized ulcer.

Figure 6B. Refractory caudal ulceration in a cat after full-mouth extraction.

Figure 6C. Laser tissue ablation on the affected side in the same patient as in Figure 6B.

Figure 6E. The CO2 laser used to help treat the ulcers in the same patient as in Figure 6D after hair foreign body removal.

Figure 6G. Laser treatment for resolving ulceration of a cat's tongue (same patient as in Figure 3A).

Figure 6H. Resolution of the rodent ulcer in the patient shown in Figure 2A after systemic steroid treatment and local CO2 laser tissue ablation.

Dr. Jan Bellows owns All Pets Dental in Weston, Florida. He is a diplomate of the American Veterinary Dental College and the American Board of Veterinary Practitioners. He can be reached at dentalvet@aol.com. 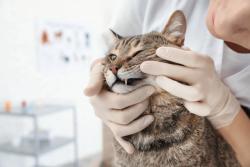