What lies beneath: An overview of a veterinary abdominal ultrasonographic examination

Join veterinary radiologist Dr. Kathy Spaulding on an ultrasonic tour of the intestinal tract and see which findings might indicate disease.

(Shutterstock)According to CVC educator Kathy Spaulding, DVM, DACVR, abdominal ultrasonography can give veterinary private practitioners more information than ever about the intestinal tract. Classically speaking, five layers in the intestinal wall are visible via ultrasound-four actual layers (two ‘S' layers and two ‘M' layers) and a hyperechoic pseudo layer associated with the surface of the lumen, which is the innermost ‘S' layer. Conveniently, the layers alternate in echogenicity, making it easier to discriminate between each one.

In general, ‘S' layers are hyperechoic and ‘M' layers are hypoechoic (Figures 1 and 2). Here, in order from outermost to innermost, are the layers, and what you can learn from them-all guided by Dr. Spaulding.

The outermost ‘S' layer is the intestinal serosa. Normally, it is a thin, uniform hyperechoic line. Differences in the appearance of the outer S layer often reflect what is going on around the intestine and help to identify the integrity of the intestinal wall. The serosal layer is the same thickness in the duodenum and jejunum and minimally thicker in the ileum. Anechoic peritoneal effusions (transudates) increase the conspicuity of the serosal layer. Increased echogenicity of modified transudates or exudates decrease the visibility of this layer.

Encapsulating sclerosing peritonitis, as can happen secondary to abdominal infection or inflammation, results in increased fibrin activity. This looks like a webbing or thick membranes on the surface of the constricted and folded intestine and other affected abdominal viscera (Figure 3). There is usually concomitant peritoneal effusion. In this condition, increased fibroblastic activity on the outer layer of the intestines increases adhesions between the bowels, which can cause obstructions or interfere with transmit times.

Nodular changes on the outer ‘S' layer and surrounding echogenic fluid can be indicative of abdominal carcinomatosis, as seen with neoplasia such as pancreatic or ovarian carcinoma. If there is an interruption of the outer ‘S' layer, this can indicate a perforation of the intestinal wall, as seen with perforating linear foreign bodies. There is often hyperechoic adjacent material to the intestinal wall as omentum adheres to this area as the body attempts to wall off this defect. Free air is often seen in the peritoneal cavity. Ultrasound assisted aspiration of the fluid will confirm the inflammatory cells and intracellular bacteria. Surgical intervention is usually recommended.

The next layer in is the first ‘M' layer, which stands for the muscular layer. This hypoechoic layer is relatively similar in thickness along the small intestine with a slight increase in the wall of the ileum. Conditions that make the intestinal muscle work harder, such as chronic enteritis, diet-related responses, inflammatory bowel disease (IBD), or partial obstructions due to parasites or foreign bodies, make this layer thicker. In cats, thickening of this layer may be seen in small cell lymphoma. It is often challenging to discern the cause for the thickening. The size of the jejunal lymph nodes may be helpful as they are typically larger with neoplasia. However, a full thickness biopsy or monitoring to detect response to therapy is often needed.

The next interior layer is an ‘S' layer and represents the submucosa. This is a hyperechoic layer that is thinner in the duodenum and jejunum and thicker in the ileum. This layer is hyperechoic as it contains more interfaces for the sound to reflect from often due in large part to the presence of increased lymphoid tissue.

In cats, the stomach may have increased echogenicity and thickening within the submucosa due to fat storage. Disease conditions that may thicken the submucosa include IBD, intestinal tumors, infections and intestinal parasites (Heterobilharzia species as reported in the dog). The patient in Figure 4 had focal colitis. Each layer is maintained but the wall layers are thickened.

The next hypoechoic layer is the ‘M' layer. The mucosa, is the most examined layer on a gastrointestinal ultrasound as this black layer is thicker and most changes due to disease are hyperechoic. This layer should be hypoechoic; hyperechoic appearance indicates disease. The mucosa is the thickest in the duodenum, becomes thinner in the jejunum, and is thinnest in the ileum. Noting any change in the layer echogenicity, and the appearance of the hyperechoic area is important when looking for disease and attempting to diagnose the underlying cause.

The appearance of the mucosa can change depending on when a pet has been fed. A recent study showed that 60 minutes after eating, the duodenum has hyperechoic foci in comparison to fasted animals.1 If there are hyperechoic foci within the mucosal layer on abdominal ultrasound, determining when the animal was last fed and then repeating the exam on the fasted animal may be helpful to determine the significance. If there is lymphangiectasis, then dilated lacteal will be evident as hyperechoic perpendicular pillars in an otherwise hypoechoic layer (Figure 5). These pillars are due to lacteals that dilate with hyperechoic material.

Sometimes hyperchoic foci are noted in the ‘M' layer. This may be seen if the patient has Cushing's syndrome or has been exposed to corticosteroids. Additional areas in which vascular mineralization are noted with corticosteroids include the spleen and the cortex of each kidney (Figure 6).

In IBD, ultrasound changes within the mucosal layer depend on the severity and chronicity of the condition. This can be a challenge to diagnose as you may not see any sonographic changes. Mild mucosal thickening may be present. There may also be a loss of distinction between the intestinal layers. In IBD, the mucosal layer may develop a uniform increased echogenicity.

Abdominal lymph nodes may be mildly enlarged with IBD, food sensitivity or intestinal infection. If the lymph nodes are moderately to severely enlarged or irregular (Figure 7), then it may be due to small cell lymphoma. A fine-needle aspirate of the lymph node is indicated, as well as exploratory surgery to obtain full-thickness biopsy samples of the intestines. 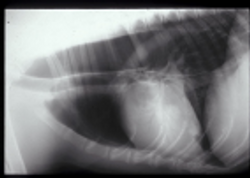