Although heartworm disease is as preventable as any of the infectious diseases of dogs and cats, infections with D. immitis continues to be a common occurrence. Because of the awareness of owners and the efforts on education, the veterinary profession at times has over simplified this disease and has lead to some of the confusion over feline heartworm disease.

Heartworm disease in cats must also be considered a potential health risk by veterinarians. Clinical signs can often be overlooked or misdiagnosed as another disease.

We have historically told cat and dogs owners that D. immitis has a six-month life cycle, which is true relative to time of infection until possibility of producing microfilaria and production a host that serve as a source for mosquitoes to initiate the next infection. However, from the animal's point of view, heartworms have a three-month disease cycle, especially in the cat. After a dog or cat is exposed to mosquitoes with L3, as early as 90 to 100 days later, small young adult worms (L5s, 2-5 cm in length) arrive in the right ventricle and are found in the terminal pulmonary arteries (especially the caudal arteries). Three months after the infection, there is disease being produced and radiographic and histologic changes are evident. Because the early part of this three-month disease cycle is typically asymptomatic in dogs, it has largely been ignored. In the cat, the arrival of L5 as early as three months after infection is associated with an acute inflammatory reaction including peribronchial infiltration and eosinophilic interstitial and alveolar reactions. In addition, this early phase is considered more dramatic because of a higher mortality of immature adult worms during the three- to six-month time following infection compared to the dog. On radiographs, an enlarged caudal pulmonary artery can be viewed. However it is actually the pulmonary artery and an extensive periarteritis, which can have the same radiographic tissue density. The enlarged pulmonary artery and associated periarterial reaction often resolve over several months leading to the false impression that the heartworms are gone. The truth is that once adult heartworms have developed, the cat and heartworms often exist without obvious clinical disease and the lung pattern radiographically is dominated by the bronchial disease without any cardiac and/or pulmonary arterial changes.

Based on several clinical studies, we have come to the understanding that feline heartworm disease (FHD) is dynamic over time as compared to the dog. The clinical and radiographic changes can vary from month to month, usually dictated by how the host reacts to that particular stage of the heartworm life cycle. Because cats with adult heartworms often have no clinical signs, acute signs associated with the death of the heartworm may be a complete surprise to the owner and veterinarian alike. In a study of spontaneous death associated with dyspnea of cats in practice, we found cats that died from heartworm disease always had dead or dying heartworms in them. However, one cannot predict how each cat will react to the death of the heartworm and most cats survive the adult heartworm infection. Because of the much greater incidence of heartworm disease associated with the three-month disease cycle, heartworms as a potential fatal event should be given very little emphasis. Heartworms as a differential for coughing and dyspenic cats should be considered a much more crucial message.

Diagnostics and testing related to initiation of preventative medications continues to complicate feline heartworm disease. Because antibody testing is evaluating how the host reacts to the parasite and each antibody test measures antibody against different target proteins, it is of no surprise that in each point in the life cycle of the heartworm, disparate results can occur. More germane is that most antibody tests detect antibodies which can be detected as a result of immature heartworms migrating towards the heart. Thus, a cat which is antibody positive is considered to be a cat which has been successfully infected, the worms have lived typically two or three months and may or may not have developed into adult heartworms. Nevertheless, they have been successfully infected and typically some have developed into L5 in the distal pulmonary arteries. To consider a cat that gets immature adults, develops an inflammatory lung disease, and has all the worms die over a one- to two-month period a "self-cure" would not be appropriate.

The ventrodorsal radiographic view is best to view enlarged caudal pulmonary arteries and associated perivasculitis which are usually associated with the 4-6 month stage after infection. In addition, extensive peribronchial densities and diffuse alveolar patterns can beidentified in most areas of the lung. Typically, cats with heartworms do not have cardiac changes.

Yearly testing after the initiation of heartworm preventatives does not appear to be warranted. The problems listed above are complicated by the time frame at which the heartworm initiates the antibodies currently being measured. If a cat is placed on heartworm preventative and exposed, no heartworms will develop in the pulmonary arteries. However, as was found in dogs, some of these cats will have worms live long enough before they die to initiate the antibodies that are being reported. Thus, a cat that is on a monthly preventative and exposed will be protected but may be antibody positive (depending on the assay) when tested the next year. These issues confuse the owners and veterinarians into avoiding a rational discussion on feline heartworm disease.

Although clinical signs of heartworm disease have typically been divided into acute or chronic (see Table 1), the reality is that heartworm disease in the cat is based on how the cat reacts to the various stages of the heartworm life cycle. Because of the sedentary nature of cat behavior, cardiac changes are rarely noted in FHD. The presentation of most cats with heartworm disease mimic asthma. Because of the inflammatory lung disease, the enlarged caudal pulmonary arteries may not be visualized and may not have had time to develop. The reasons for spontaneous vomiting unrelated to eating have been an often-questioned correlate. In a study of cats presented for vomiting to practices in four major southern cities, we found that 42 percent were heartworm antibody positive. The ability of low doses of corticosteroids to stop the vomiting has lead to the theory that inflammatory mediators from the lung affect the chemoreceptor trigger zone of the brain in cats with heartworms. Typically cats which vomit from heartworms have radiographically visible lesions associated with heartworms. For almost 20 years, vomiting cats referred to Auburn University receive thoracic radiographs for evaluation for feline heartworm disease.

A key scientific question is whether cats which develop heartworms, continue to have chronic bronchial disease. We have noted numerous cats examined over the years that have developed heartworms, eliminated the active infection, but continued to have inflammatory lung disease severe enough to require continued therapy for years. Electron microscopic evaluation of heartworm-infected cats has clearly demonstrated eosinophils in the alveolus and lung interstitium, with and without a peripheral eosinophilia. Heartworm disease, especially in the cat, should be considered a lung disease. The key question suggesting that heartworms may be a trigger for some cats with asthma continues has not definitively been answered. 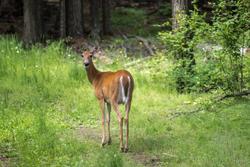