Ultrasound of the gastrointestinal tract (Proceedings)

Ultrasound of the gastrointestinal (GI) tract has become an increasingly popular and useful diagnostic procedure for evaluation of gastric and intestinal disease.

Ultrasound of the gastrointestinal (GI) tract has become an increasingly popular and useful diagnostic procedure for evaluation of gastric and intestinal disease. Although gas may preclude complete evaluation of some GI structures, many abnormalities are well visualized with ultrasound examination. Ultrasound of the GI tract can supplement and enhance information obtained from abdominal radiographs, and may preclude the need for GI contrast studies.

Preparation for GI ultrasound exam is minimal. Fasting is ideal for evaluation of the GI tract, as it reduces intra-luminal gas. This may not be possible in non-elective cases. Typically the patient is scanned in either dorsal or lateral recumbency. Moving the patient from side to side, or scanning with the patient in a standing position can result in fluid accumulation in dependent portions of the GI tract, providing more complete evaluation. The pylorus may be better evaluated in either right lateral recumbency or with the patient in a standing position.High frequency tranducers (7.5-10 MHz) may be necessary to completely evaluate individual gastric and intestinal wall layers.

To fully evaluate the stomach, both longitudinal and cross-sectional imaging planes should be used. The canine stomach lies horizontal to the long axis of the body so longitudinal imaging planes allow cross sectional images of the stomach. The transducer is placed at the xiphoid, angled caudal to the liver, and the stomach followed, from left sided, dorsal fundus region, to the right, more ventrally located pylorus. The pylorus will extend cranially to its junction with the duodenum in most dogs, and will need to be followed up beneath the rib cage. This is more difficult in deep chested dogs. After completing the cross sectional imaging of the stomach, the transducer is turned 90 degrees to evaluate in the longitudinal plane. This will be perpendicular to the spine. Similar techniques should be used in the cat, remembering that the stomach lies more parallel to the spine, and the pylorus lies closer to midline.

When the stomach is gas filled, only the near wall is well visualized, as reverberation artifact and shadowing obscure the lumen and far wall. However, wall layers and wall thickness in the near wall can be examined. In the non-distended stomach, rugal folds may be prominent, and it is important to measure between the rugal folds for accurate assessment of gastric wall thickness. In the empty stomach, rugal folds produce a linear, striated appearance. In cross section, rugal folds may appear as spokes on a wheel. Anechoic fluid and/or echogenic food particles may be visualized in the gastric lumen.

Five individual layers are present in both the gastric and intestinal wall. From outside to inside these layers include:

mucosal surface/lumen interface: hyperechoic layer in the center of the bowel

These individual layers are best visualized with higher frequency transducers.

Normal wall thicknesses have been established in the dog and cat for the stomach and various segments of intestine:

Stomach and bowel wall measurements are made from the lumen to serosal surface.

Four to five contractions/minute should be seen with normal stomach peristaltic activity, with 1-3 noted in the small intestine.

The small intestines can be seen throughout the abdomen, both end-on and longitudinally oriented. The duodenum has a slightly larger diameter than the rest of the small intestinal loops, and is the most lateral and ventral bowel loop in the right cranial abdomen. It can be located usually just ventral and lateral to the right kidney, and followed cranially towards the pylorus. The duodenal papilla may occasionally seen in the normal dog and cat duodenum. In the cat, the ileum has a distinctive cross-sectional appearance (resembling spokes on a wheel) and can be visualized as it enters the colon, just medial to the right kidney. This is less often visualized in dogs due to increased gas in the larger, better developed cecum. The small intestinal lumen is usually empty, with only a hyperechoic gas/mucosal interface seen. Occasionally gas or fluid is visible. The colon typically is gas filled, with poor visualization of the lumen. The descending colon can be located dorsal to the bladder, and is typically filled with gas and feces.

Indications of abnormalities in the GI tract include increased wall thickness, loss or poor definition of wall layers, increased luminal diameter, abnormal luminal contents, and decreased motility. Ultrasound examination can determine the extent of the lesion, either focal or diffuse, as well as involvement of adjacent tissues, such as regional lymphadenopathy, peritoneal effusion, inflamed omentum, or the presence of free peritoneal gas. In many cases, a diagnosis can be made on ultrasound examination, precluding the use of GI contrast agents. It should be noted, however, that abdominal radiographs and abdominal ultrasound are complementary procedures, each with advantages and disadvantages. It is helpful to have images from both modalities when making a diagnosis of GI disease.

Ultrasound is useful in the detection of obstruction due to foreign bodies. Pyloric foreign bodies typically result in fluid distension of the stomach due to outflow obstruction, enhancing visualization. A curvilinear echogenic interface is typical of ball foreign bodies. Depending on the composition of the ball, shadowing or through transmission may be present deep to the rounded interface. Chronic pyloric outflow obstruction should be considered when the gastric lumen is distended with fluid. Pyloric stenosis results in usually symmetrical thickening of the pyloric walls, with the lumen narrowed and difficult to see. With small intestinal obstruction the segment of bowel proximal to the obstruction is typically fluid distended, aiding in visualization of foreign objects. Irregularly shaped foreign bodies are less distinctive than balls, and may not be as well visualized. An irregular echogenic interface with strong shadowing, that does not change over time, or is associated with fluid accumulation proximal to the site is suggestive of obstructive foreign material. Peristaltic activity is usually increased with acute obstructions, but may decrease with chronicity. Linear foreign bodies may result in visible bowel plication, with the presence of an echogenic linear structure extending through the affected bowel segment.

Intussusceptions can usually be reliably diagnosed on ultrasound examination by their characteristic "target", or "ring" appearance. The presence of a bowel within a bowel results in a multilayered concentric ring like appearance when seen in cross section. Invaginated mesenteric fat creates an additional echogenic structure within the center of the intussusception. Bowel proximal to the intussusception is typically dilated. In the older dog, tumor may be associated with intusscuseption. Linear foreign bodies are also occasionally associated with intusscusceptions.

The ultrasound appearance of inflammatory disease is variable, depending on the extent and severity of the process. Disease can be present without ultrasound changes. However, typical abnormalities include:

3. Increased muscularis layer thickening may indicate inflammatory bowel disease, although this has also been reported in intestinal lymphosarcoma, as well as small intestinal obstruction

Neoplastic disease in the stomach or bowel is characterized by:

2. Complete loss of wall layers (the most characteristic change of intestinal neoplasia)

Gastrointestinal lymphosarcoma often results in extensive or multifocal bowel wall thickening with loss of layers, but rarely causes an obstruction. Intestinal carcinoma more often has a focal thickening, loss of layers, irregular lumen, and is more likely to result in intestinal obstruction. Gastric carcinoma can cause more diffuse wall thickening with" pseudolayering", the appearance of a moderately echogenic zone surrounded by outer and inner outer and inner hypoechoic layers. These layers do not correlate histologically with normal layers of the stomach wall. Smooth muscle tumors (leiomyoma/leiomyosarcoma) tend to be eccentric masses without obstruction, and may be quite large at the time of diagnosis. Regional lymphadenopathy is rare.

Jejunal lymphosarcoma. Note the complete loss of wall layers and increased thickness of the wall compared to the normal bowel wall below. 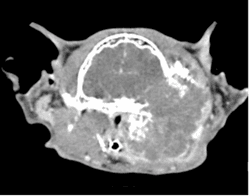 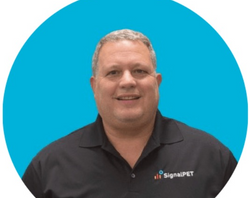 Episode 43: How artificial intelligence can expand your range and depth of veterinary care