These findings display the effects of bovine sperm sex-sorting, plus how farmers can achieve optimal reproductive success.

Farmers have the ability to select the sex of the calves they breed with the use of sex-sorting technology. This ever-evolving technology has been around for the past few decades and field study reports have found conflicting reproductive outcomes.1

The researchers identified an almost 25% reduction in pregnancy and calving rates after sex-sorting.1 This decrease was likely due to the stress on the sperm when it goes through sorting. Sorting subjects sperm to multiple stressors such as high pressures to go through the flow cytometer, exposure to UV laser light, and cooling to 5 °C.1 These temperatures, mechanical, and chemical stressors lead to deformations of the spermatozoa head, sharp bends in the tail, and an increased number of damaged mitochondria. Sperm-sorting’s freeze/thaw process likely exacerbates these changes and has been found to reduce the pregnancy rate ratio compared to fresh sex-sorted sperm.1 Fresh sex-sorted sperm do not undergo the freeze/thaw process and are less likely to have these deformities. Very few trials evaluated the use of fresh sex-sorted sperm and more studies are needed to determine its benefit.

Abortion and stillbirth rates were not dramatically affected using sex-sorted sperm. Stillbirths are more likely to occur in offspring that have been sexed for the wrong sex.1 For example, a male cow born despite X-sexed semen being given to the mother would be more likely to result in stillbirth.

Bean is a 2022 PharmD Candidate at the University of Connecticut. 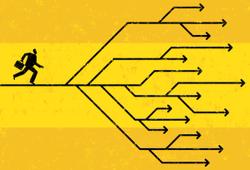 Vet techs: a fulfilling career may be waiting outside the clinic