This form of therapeutic intervention may be just the answer for this disease that affects up to 5% of the pet cat population.

In a series of Morris Animal Foundation-funded studies, researchers at the University of Missouri’s College of Veterinary Medicine are evaluating whether allergen-specific immunotherapy (ASIT) will ultimately provide a cure for feline asthma, a disease estimated to affect up to 5% of the pet cat population.

Because ASIT can take several months to work, the researchers first evaluated a shortened treatment protocol-called rush immunotherapy (RIT)-in order to evaluate response to treatment within a shorter time. The RIT protocol is often used in dogs and people with asthma, and in this study it involved rapidly loading increasing doses of a common allergen in cats-Bermuda grass-in cats with experimentally induced asthma. The results revealed significant reductions in airway inflammation.1

In another study, the researchers evaluated whether intradermal skin testing (IDST) or a serum allergen-specific IgE ELISA would better identify aeroallergen sensitization in experimentally induced asthma in cats sensitized with either house dust mite allergen, another common allergen in cats, or Bermuda grass allergen. Results showed that IDST had higher sensitivity than serum allergen-specific IgE measurement, but both tests had good specificity. These results mean that the IDST may be a better screening test, but that either test could be used to help select allergens used in ASIT.

In a different study, cats with experimentally induced asthma were sensitized with one allergen but given a different allergen in their RIT protocol in order to identify whether incorrect selection of allergens-which could likely occur when trying to identify the allergens pet cats react to-would provide cross-protection against the causative allergen. The results showed that giving the incorrect allergen in RIT does decrease eosinophilic airway inflammation (unpublished data), but that the immunologic mechanisms differed from that in cats sensitized to and treated with the same allergen.4

In ongoing studies, the researchers are evaluating whether corticosteroids may affect serum or intradermal allergen-specific IgE test results or RIT efficacy, because it is likely that pet cats will need inhaled or oral corticosteroid treatment to alleviate clinical signs during the period when their allergens are being identified and during initial immunotherapy.

The results of these studies are promising and support that ASIT reduces airway inflammation in cats with experimentally induced asthma and may one day cure this disease. However, before routinely recommending this treatment in pet cats with asthma, much consideration must given to correctly identify the causative allergens before initiating immunotherapy, and questions must be answered regarding the potential impact of concurrent or recent corticosteroid therapy. 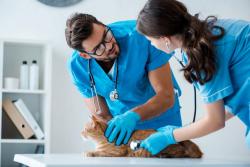