Veterinary oncologist Dr. Kim Selting provides her advice on achieving the best outcomes in these cases.

Treating soft tissue sarcomas can be frustrating because of the high rate of local recurrence despite what appears to have been an aggressive resection. Medical oncologists often mediate cancer therapy between the surgeon and the radiation oncologist and must determine what has been done with surgery in order to determine what must be done with radiation to achieve local control of the tumor. Here are a few tips to help prevent seeding of soft tissue sarcomas and enhance the chances of successful follow-up radiation therapy.

To achieve a wide resection, many practitioners create a large amount of dead space and will then use drains to help the area heal or will place a drain if a seroma develops postoperatively. The problem with this approach is that the drain tract is then subject to tumor cell spread, and it can be extremely difficult to trace the drain tract when a decision is made to follow with radiation therapy. Even if the drain tract can be identified, the radiation field is generally substantially larger. Additionally, seromas can separate fascial planes and also create paths for tumor cell migration and recurrence.

If multiple mass removals or surgical procedures are to be done on a patient, it is important to first know what the masses are and use only one set of instruments on the malignant tumor, as tumor cells can be transplanted to other sites. Changing instruments, including gloves, between procedures is wise if the tumor type is unknown.

PLAN BEFORE YOU CUT AND CLOSE

Remember that tumor excision can sometimes create tension when reapposing normal tissues. Tension will lead to slow healing, and these suture lines are more likely to dehisce when radiation is initiated. Tension should be avoided if at all possible.

However, never use releasing incisions to close a site of sarcoma removal if the owner is considering radiation therapy, for example, on an extremity. Each releasing incision must be considered a possible site of tumor seeding, especially if the same instruments are used.

When faced with a challenging soft tissue sarcoma removal and to minimize side effects to normal tissue, it may be helpful to consult with an oncologist or oncologic surgeon to plan an incision that can later be treated with radiation, if needed. Choosing horizontal vs. vertical incisions can be a critical decision depending on the area of the body affected. Surgical planning can markedly increase the chances of success with subsequent therapy. Always thoroughly describe the surgical procedure that was performed when referring a patient for adjuvant radiation therapy.

Once the tumor has been removed, en bloc margins must be preserved so the pathologist may accurately determine the completeness of excision. Many tumors with complete histologic margins do not recur, and incomplete excisions warrant radiation therapy. Ideally, surgical or India ink can be used to mark where the surgeon's blade cut. Do not remove a small portion of a large tumor and submit only that portion for a diagnosis. If you cannot send the entire tissue en bloc, submit the tumor and sections of the most concerning margins where the surgery was closest to normal tissue.

Department of Veterinary Medicine and Surgery 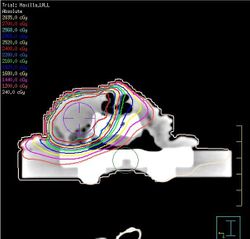