Pipe in music to decrease stress levels in your kennel

Dogs that are kenneled such as those in boarding facilities, shelters and research facilities are known to have high levels of stress. In several studies, various forms of enrichment have been investigated to evaluate the effect of lowering stress in dogs, including the use of toys, visual or olfactory stimulation and human interaction. In a previous study performed by the same group as the current study, classical music was shown to lower stress in kenneled dogs. However, rapid conditioning to this form of enrichment was documented indicated the music became less effective at lowering stress after a period of time (seven days in that study). This study was aimed to determine if the stress reducing effects of music playing could be extended if the dogs were exposed to different genres of music.

The test was performed at two facilities in Scotland-the Scottish SPCA Dunbartonshire and West of Scotland Animal Rescue and Rehoming Centre-over a nine-month period. It was performed while normal daily husbandry and operational activities occurred at the facilities. This included cleaning, rehoming and visits by the general public. There were 38 dogs in the study that were a mix of male and female, intact and neutered and stray, surrendered or seized animals. All of the animals had veterinary exams and none had cardiac arrhythmias. The dogs were fitted with heart rate variability monitors and had daily urine samples collected on routine afternoon walks. Data were obtained from the monitors without the researchers entering the kennels.

Over an 11-day period, dogs had two days of no music for control purposes, followed by five consecutive days of music that was piped into the kennels for six hours a day using a Spotify playlist through wireless speakers around the kennel. Each day a different genre of music (soft rock, motown, reggae, pop or classical) was played, and the genres were randomized for different dog groups. The volume of the music was always the same. At the end of the five days the music was played, an additional two days with no music was evaluated. Weekend days were not evaluated.

They've got the beat

The results of this study were consistent with previous findings that auditory stimulation is an effective enrichment tool in a kennel environment. During periods where music was played, dogs spent more time lying down and had significant changes in heart rate indicating lower stress levels. No difference was noted in barking during periods when music was played, and in this study urine cortisol concentration did not prove to be a good parameter for assessing stress in these dogs. Interestingly, statistically significant differences between genres was minor-soft rock and reggae appeared to have the most positive effect on behavior, while motown had the least. Physiological and behavioral changes were maintained over the five-day period, suggesting a variety of genres may help minimize habituation to auditory enrichment.

And the beat goes on

The benefit of auditory enrichment appears to be significant in reducing the stress in dogs housed in kennels. This study indicates it is possible that dogs may have individual music preferences. Dogs appear to respond differently to different styles of music, with the most positive response in this study being to soft rock and reggae followed by pop, classical and motown. Heavy metal music has previously been shown to induce shaking in dogs (a sign of fear) and should be avoided.1,2 The bottom line is that dogs are less stressed when they are listening to music, and alternating music genres may prolong the effects of minimizing stress. 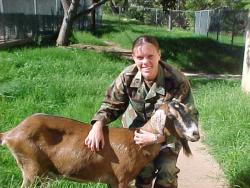 Serving our country and our pets
Advertisement