Oral tumors: Know the extent of disease prior to surgery

Author's note: The first article in this series covered melanomas and SCC in dogs (July, DVM Newsmagazine). This article will discuss fibrosarcoma and benign tumors in dogs as well as SCC and fibrosarcoma in cats.

Author's note: The first article in this series covered melanomas and SCC in dogs (July, DVM Newsmagazine). This article will discuss fibrosarcoma and benign tumors in dogs as well as SCC and fibrosarcoma in cats.

Fibrosarcoma makes up 10 percent to 20 percent of all oral tumors in dogs. They are seen most frequently in younger large-breed male dogs. They arise from the gingiva and occur with equal frequency on both the maxilla and the mandible. These tumors appear as firm non-pigmented masses with or without ulceration (Photo 1).

As with other soft-tissue sarcomas, they are locally invasive, but the potential for metastasis is low. Invasion into the surrounding bone is common.

In some cases, these tumors are straightforward to diagnose. However, these tumors can appear so well differentiated that they are diagnosed as fibromas, nodular fasciitis, chronic inflammation or granulation tissue (Photo 2). The histologic description of these tumors can be misleading since they would be considered benign. Aggressive treatment would not be recommended. However, the behavior of this group is not benign, and they are known as histologically low-grade but biologically high-grade fibrosarcomas (Ciekot 1994). Aggressive treatment is warranted in these situations.

Photo 2: Histopathology from a dog with a histologically low-grade, biologically high-grade fibrosarcoma. Note the well-differentiated appearance of the neoplastic cells.

The primary goal of treatment is to achieve local control, given the low metastatic rate. Surgery and/or radiation therapy are the most common treatments. As with other oral tumors, it is important to know the extent of the disease prior to surgery. For these tumors, skull radiographs, CT scan or MRI are recommended to determine the extent of involvement prior to surgery. Bone invasion is seen on radiographs only if there is greater than 50 percent bone loss. CT scan or MRI is considered superior to radiographs since it can identify bone invasion at an earlier stage as well as provide information on soft-tissue involvement. Radical excision is required for these tumors given the depth of tissue invasion (Photo 3). Even with wide excision, local recurrence still remains problematic. Reported recurrence rates following maxillectomy or mandi-bulectomy have ranged from 40 percent to 65 percent. Reported survival times following surgery are between 9-12 months (Kosovsky 1991, Schwarz 1991, Wallace 1992).

Photos 3a & b: Partial maxillectomy in a dog with fibrosarcoma. Photo 3a shows the extent of the surgery required to obtain an adequate margin. Photo 3b shows the same dog postoperatively. The outcome of this surgery was both functional and cosmetically acceptable.

Radiation therapy has been used in the treatment of these tumors either as an adjuvant therapy following surgical excision or a primary treatment. Fibrosarcomas in the oral cavity are considered to be relatively radioresistant. Early reports in which radiation therapy was the only treatment modality produced disappointing results with the median survival times being approximately six months (Thrall 1981).

A more recent study involving 28 dogs with fibrosarcomas reported a median progression-free interval (PFI) of 26 months (Theon 1997). In this study, dogs with tumors less than 2 cm had the longest PFI. There is limited information regarding the use of radiation therapy following surgical excision, but it would be expected that control rates would be higher when treating microscopic disease.

The most common benign oral tumors in dogs belong to the category of odontogenic tumors. This would include the epulides (fibromatous, ossifying and acanthomatous) and ameloblastoma. There is some debate over what the appropriate nomenclature of these tumors is (Dubielzig 2002). The term epulis refers to any tumor that arises from the gingival but historically has been used to designate tumors that arose from the periodontal ligament. Three types of epulis have been described: fibromatous, ossifying and acanthomatous. It has since been found that some of the tumors previously designated as epulides did not have involvement of the periodontal ligament. Many of the fibromatous and ossifying epulis have been found to be actually hyperplastic lesions of the gingiva. Acanthomatous epulis has been reclassified as acanthomatous ameloblastoma, based on the tissue of origin, although the term acanthomatous epulis is still used. Adamantinoma is an archaic term for either ameloblastoma or acanthamatous ameloblastoma and is no longer used.

Photo 4: CT scan of acanthomatous ameloblastoma. Although these tumors are considered benign, they can be very locally destructive. Note the extent of invasion and bone destruction.

Ossifying and fibromatous epulis are slowly growing tumors that do not invade bone. As mentioned above, some of the tumors may actually be fibrous hyperplasia. Given that these tumors can involve the periodontal ligament, excision is often not complete unless the affected tooth root is included. However, given that local recurrence is slow and that these tumors are not invasive, aggressive treatment is generally not warranted.

Photo 5: Dog with an acanthomatous ameloblastoma. This image was captured on the first day of radiation therapy.

Acanthomatous ameloblastoma is a more aggressive tumor that progresses more rapidly and is invasive into bone. These tumors do not metastasize. These tumors should be treated aggressively, otherwise they will continue to be destructive and interfere with the ability to eat. Treatment options for these tumors include surgical excision and/or radiation therapy. As with other oral tumors, pre-operative dental radiographs, MRI or CT scan are recommended to determine the extent of the tumor (Photo 4). In order to adequately excise the tumor, a wide margin should be taken and must include surrounding bone. Radiation therapy has also been used successfully as a primary treatment for those tumors that are not amenable to surgery or when owners do not wish to proceed with an aggressive surgery. Complete and partial responses as well as disease stabilization have been reported with radiation therapy (Photos 5 and 6). In one study, dogs were given 12 treatments of radiation therapy over a four-week period. At three years, 80 percent of the dogs were alive without progression of the tumor (Theon 1997). As would be expected, larger tumors did not respond as well. In a second series, 85 percent of dogs were tumor free at one year post-radiation therapy (Theon 1994). Given that these are considered to be benign tumors, the use of chemotherapy has not been systematically evaluated. Intralesional bleomycin was given once weekly to four dogs, and it was reported that all dogs had either a partial or complete response that was durable (Yoshida K 1998).

Ameloblastoma and keratinizing ameloblastoma are tumors that arise from odontogenic epithelial cells. They are considered to be benign, slowly growing tumors that present as a swelling within the bone. Surgical excision is the recommended treatment. Recurrence is possible if excision is not complete.

Squamous cell carcinoma (SCC) is the most common oral tumor in cats and makes up about 60 percent of all oral tumors. The most common site is sublingual, but it can arise from the gingiva of the mandible or the maxilla (Photos 7 and 8). These tumors are frequently ulcerated and have a significant inflammatory component. Given the severe inflammation, cats present for drooling, dysphagia and halitosis. SCC in cats is considered extremely invasive and extends deep into the stroma and bone (Photo 9). Metastasis is less likely, although it has been reported. The most frequent site of metastasis would be the regional lymph nodes, followed by the lung. It is not uncommon for this cancer to be diagnosed initially as dental disease given that loosening of the teeth is common due to destruction of the underlying bone. The cause of this tumor is not known, but it has been speculated that it may be secondary to environmental carcinogens given feline grooming habits that would expose the oral cavity to any carcinogens on the fur.

SCC in cats is one of the most frustrating tumors to treat. The diagnosis is often made at a late stage in the disease process, leading to poor treatment responses. The size and/or location of these tumors prevent wide excision. Reports involving the use of chemotherapy and radiation therapy either alone or in combination with surgery have been relatively disappointing. Survival times range from two to six months in most reports. At this time, the best method to treat these tumors has yet to be identified.

Photo 9: CT scan of a cat with a maxillary squamous cell carcinoma. There has been significant destruction of bone as well as invasion into the nasal cavity.

Fibrosarcoma is the second-most common tumor in the oral cavity of cats. It accounts for about 15 percent of all oral tumors in cats. As with most sarcomas, these tumors are locally invasive and metastasis is rare. These tumors arise from the gingiva and invade into the surrounding stroma and bone. The presentation is often similar to SCC, so histopathology is required to distinguish between the two (Photo 10).

Photo 10: Cat with an oral fibrosarcoma on the left maxilla. The appearance of this tumor is similar to squamous cell carcinoma and was initially diagnosed as dental disease.

Treatment principles for oral fibrosarcomas in cats are identical to that in dogs. There are few published reports regarding treatment of these tumors, but the preferred treatment would be surgical excision. As with SCC, the location and/or size of the tumor can prevent wide excision. If surgical excision is considered, it should be aggressive. A pre-operative CT scan or MRI can be helpful in determining the extent of the tumor and in surgical planning. Post-operative radiation therapy can be considered in those patients where a wide margin cannot be obtained. There are no published reports regarding the efficacy of post-operative radiation therapy, but it would be the most appropriate adjuvant therapy. Chemotherapy has been used in the treatment of these tumors but is not considered to be a primary treatment option. 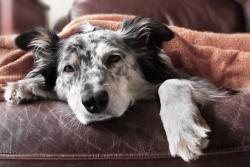