Oh yes, its the great pretender

According to CVC speaker and expert Dr. Chen Gilor, veterinarians should be screening more patients for hypoadrenocorticism or risk missing a diagnosis.

According to Dr. Gilor, veterinarians should be screening more patients for hypoadrenocorticism or risk missing a diagnosis. (Photo: Getty Images).What do a dog with chronic gastrointestinal signs and a dog in acute renal failure have in common?

They both could be atypical addisonians.

Think you can rule out Addison's disease if the sodium:potassium ratio is normal, if the adrenals measure normal on an abdominal ultrasound or if there is a stress leukogram? Think again. Chen Gilor, DVM, PhD, DACVIM, says the game on diagnosing hypoadrenocorticism has changed, and veterinarians should be screening more patients for hypoadrenocorticism or risk missing a diagnosis.

It's as simple as salt, sugar and sex

There are three zones of the adrenal gland and each secretes different hormones. Dr. Gilor shares an easy mnemonic to remember the zones: salt, sugar and sex. The zona glomerulosa secretes aldosterone, which regulates salt. The zona fasciculata secretes cortisol, which is important in sugar regulation. The zona reticularis secretes androgens that convert to sex hormones.

In hypoadrenocorticism, the clinical presentation depends on which zone is affected, and sometimes multiple zones are affected. Classically, hypoadrenocorticism has an emergency presentation that consists of hypovolemia, hyperkalemia, azotemia and metabolic acidosis due to aldosterone deficiency. Animals with complete aldosterone deficiency can only survive one or two days, Dr. Gilor says, and so these animals present acutely ill.

Clinical signs can include nonspecific gastrointestinal signs such as weight loss, decreased appetite, vomiting and diarrhea. Less common signs include megaesophagus and ascites due to low serum protein concentrations. These animals are chronically ADR (i.e. ain't doing right) and can be mistakenly diagnosed with inflammatory bowel disease (IBD) or a protein-losing enteropathy.1 Results from a minimum database can (but don't always) include anemia, lack of stress leukogram (normal or high lymphocyte and eosinophil counts), hypocholesterolemia, hypoalbuminemia or hypoglycemia. Historically, atypical hypoadrenocorticism was considered rare, but Dr. Gilor thinks that is because we often have missed it. The more you test for hypoadrenocorticism, the more you will find it.

The ACTH stimulation test is the gold standard of confirming hypoadrenocorticism. However, many practitioners are reluctant to use it as a screening test for chronically ADR dogs because of the test's cost. In any dog that is suspicious for hypoadrenocorticism, Dr. Gilor recommends performing a baseline serum cortisol concentration along with a minimum database. Hypoadrenocorticism suspects include dogs with acute renal failure, suspected liver failure without elevated bilirubin concentrations (hypocholesterolemia, hypoalbuminemia or hypoglycemia) or megaesophagus and sick dogs that have an absence of a stress leukogram and unexplained gastrointestinal disease. Don't fall into the trap of IBD, Dr. Gilor says. Remember that hypoadrenocorticism can mimic and masquerade as several different clinical presentations.

Other screening tests include abdominal ultrasonography, sodium:potassium ratio and corticosteroid-alkaline phosphatase (C-ALP) isoenzyme, which is a sensitive marker for increased cortisol. However, Dr. Gilor does not think that any of these diagnostic tests are useful for screening a dog for atypical hypoadrenocorticism. The sodium:potassium ratio is usually normal in dogs with atypical hypoadrenocorticism. With an abdominal ultrasound, the prevailing belief has been that even though the length of the adrenal gland varied with the size of the dog, the thickness (width) did not. However, a 2016 study from Auburn University suggested that adrenal thickness varied significantly with body weight, age and sex, and that new reference ranges are needed that correlate with each of these variables.3 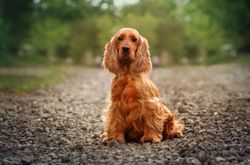