Not your grandpa's canine leptospirosis cases

My how things have changed regarding which dogs to suspect this infectious disease in, how to diagnose it and more.

Whelp, things have changed a bit since these pups were born. (Shutterstock)Historically, leptospirosis has been considered a disease primarily associated with dogs that live in or travel to rural areas, wet areas or areas frequented by wildlife. At a recent CVC, Oregon State public health veterinarian Emilio DeBess, DVM, MPVM, said the game has changed and veterinarians need to know about and communicate the new risk factors to clients. Instead of the risk factors mentioned above (which are, of course, still valid), now the main risk factors for leptospirosis include small-breed dogs (that indoor Yorkie that lives in a purse and never touches the ground), dogs that live in urban areas and unvaccinated dogs. In his experience, 50% of dogs currently diagnosed with leptospirosis have no known exposure.

What do you really need to know about leptospirosis in private practice? Read on.

The clinical signs, they are achangin'

Historically, the clinical signs associated with leptospirosis included signs of liver disease, but according to Dr. DeBess, less than 12% of patients with leptospirosis present icteric. One study found that most patients present with nonspecific flu-like signs, including lethargy, inappetence, vomiting and fever.1 The most common laboratory finding in a clinical setting is mild to moderate azotemia.

The in-house ELISA for Leptospira-specific antibodies can provide quick and inexpensive diagnosis of leptospirosis but should be used with the following guidelines:

Serology testing for leptospirosis is useful in the post-acute phase of disease (within two weeks of onset of illness).

If you are seeing an acute case (less than two days after onset of illness, fever, clinical signs), chances are the MAT results are going to be negative. Perform the PCR test, treat for leptospirosis, take precautions to protect your staff and other dogs in the clinic, and perform the MAT test up to 14 days after illness onset. If the patient has leptospirosis, the results of the second test will be positive.

Leptospirosis is just so dang hard to diagnose, or is it?

Dr. DeBess referenced work by Pedro Paulo Diniz, DVM, PhD, assistant professor of small animal internal medicine, Western University of Health Sciences, who says leptospirosis is a growing disease concern-the more you test for leptospirosis, the more you are going to find it. According to the World Health Organization, the disease is underreported in people because it is difficult to diagnose.2

The diagnostic test of choice for leptospirosis within the acute phase (within two days after illness onset) is a polymerase chain reaction (PCR) test. The PCR test is highly sensitive and specific for early detection of the disease. Here are some general guidelines from Dr. DeBess:

• Less than two days (48 hours) after onset of illness, test whole blood and urine by PCR for Leptospira.

• More than two days after and within up to 14 days of onset of illness, test the serum (microscopic agglutination test, or MAT) for Leptospira. Detection of antibodies using the MAT has been the most common method used to diagnose canine leptospirosis.1

• PCR is preferentially used in combination with serology, either an MAT or an in-house enzyme-linked immunosorbent assay (ELISA) (SNAP Lepto-Idexx). However, a negative result on a PCR test does not rule out leptospirosis.

Do you think your case is more than two weeks out? Choose an MAT or an in-house ELISA to test for antibodies. With the MAT, the serovar with the highest titer is most likely the one that is causing clinical signs, but Dr. DeBess advises not to focus too much on titers, as all serovars cross-react. The MAT is a complex test to perform and interpret because of cross reaction with nonpathogenic serovars.

More on MAT from Dr. DeBess

Interpretation of serologic results from the MAT is complicated by a number of factors, including cross-reactivity of antibodies, antibody titers induced by vaccination, and lack of consensus about the level of antibody titer that indicates infection. Antibodies produced in an animal in response to infection with a given serovar of Leptospira often cross-react with other serovars. In some cases, these patterns of cross-reactivity are predictable based on the antigenic relatedness of the various Leptospira serovars, but the patterns of cross-reactive antibodies vary between host species.

You can also test for leptospirosis postmortem by collecting and submitting sections of kidney for PCR testing.

Are a patient's test results negative but you have a high index of suspicion? Dr. DeBess recommends treating the patient for leptospirosis with fluid therapy, supportive care and doxycyline (5 mg/kg/day for two weeks). In critical or vomiting patients you can substitute ampicillin (20 mg/kg intravenously t.i.d.).

Dr. DeBess makes no bones about it: If you suspect leptospirosis, treat for it and protect your staff and other dogs in the hospital from a highly contagious and communicable disease. Instead of worrying about serovar titers, Dr. DeBess says to worry about:

Protecting other dogs in the clinic from leptospirosis. The urine of infected animals is considered highly infectious.

Protecting your staff. Label the cage “Lepto suspect” and isolate the patient as necessary. Prevent contact with mucous membranes, and wear gloves and protective clothing when handling the animal or cleaning the cage. Dr. DeBess says the first 72 hours are the time for highest vigilance: animals are considered to be noninfectious and non-shedding after three days of receiving antibiotics. Luckily, leptospirosis in the environment is easy to kill: Clean surfaces with a solution of soap, water and bleach. In the home environment, hot water, exposure to sunlight and washing bedding will also kill the organism.

Preserving the patient's well-being. A delay in suspecting the infection is the major cause of death by canine leptospirosis, and 80% of patients without signs of severe respiratory complications that are treated appropriately recover.

A quick Google search will show you that there is still a prevailing belief that leptospirosis vaccines have a high reaction rate. As reported in the 2010 ACVIM consensus statement on leptospirosis, one study that looked at acute vaccine reactions in a large database of dogs found that vaccines that contained leptospiral antigen were no more reactive than other canine vaccines.3 If your clients still push back, Dr. DeBess says to tell them that the leptospirosis vaccine is a killed vaccine and is no more risky than a rabies vaccine.

Leptospirosis is a vaccine-preventable disease, and the serovars are considered cross-protective. Because of recent outbreaks in urban areas such as Portland, Oregon, and the zoonotic potential of the disease, Dr. DeBess' current recommendations are that all dogs should be vaccinated against leptospirosis. Period.

Dogs that have been diagnosed with and treated for leptospirosis should also be vaccinated. Dr. DeBess advises to wait until the dog is healthy and the two-week course of antibiotics is finished to begin the two booster vaccine series. 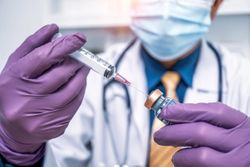