Damian Williams, the United States Attorney for the Southern District of New York, announced earlier this week that veterinarian Louis Grasso and trainer Richard Banca plead guilty to their participation in the distribution of adulterated and misbranded drugs with the intent to defraud and mislead. According to a United States Department of Justice release, the charges were filed in connection with United States v. Grasso et al., 20 Cr. 163 (OKC).1

“Grasso and Banca represent the corruption and greed of those in the racehorse industry looking to win at any cost. In peddling illegal drugs and selling prescriptions to corrupt trainers, Louis Grasso abdicated his responsibilities as a medical professional to ensure the safety and health of the racehorses he ‘treated,’” said Williams.1

“By injecting horses with unnecessary and, at times, unknown drugs, Grasso risked the lives and welfare of the animals under his care, all in service of helping corrupt racehorse trainers like Banca line their pockets through fraud. These latest convictions demonstrate the commitment of this Office and of our partners at the FBI to hold accountable individuals seeking to profit from animal abuse and deceit,” he continued.

According to court documents1, the charges in this case came from an investigation of “widespread schemes by racehorse trainers, veterinarians, PED distributors, and others to manufacture, distribute, and receive adulterated and misbranded PEDs and to secretly administer those PEDs to racehorses competing at all levels of professional horseracing.”

These schemes involve participants evading PED prohibits and deceiving regulators and horse racing officials to improve race performance and receive prize money at racetracks throughout the United States. These schemes put the racehorse’s health and well-being at risk. 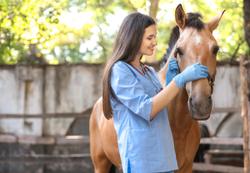