We welcome behavior questions from veterinarians and veterinary technicians.

Click here to submit your question, or send an e-mail to vm@advanstar.com with the subject line "Behavior questions."

How can I better help this cat owner resolve the seemingly resource-guarding or territory-specific intercat aggression problem described below?

My client has two spayed female cats adopted from a shelter two years ago where they were cage mates for several months at least. Since being adopted, they've lived together peacefully, with the exception of an occasional (once every few months) play episode that escalated into a fight. However, about two months ago, one cat began attacking the other cat while she was in the litter box.

The owner had only two litter boxes (one on each level of the house—main floor and basement), and after the attacks started, the owner discovered that the victim cat had been eliminating inappropriately in the basement. So I suggested that the owner clean the area and add a third litter box near the area of inappropriate elimination, which she has done.

Both cats have annual wellness and routine vaccination visits and have no current medical problems. The victim has a history of three episodes of idiopathic cystitis that occurred immediately after boarding. The attacks in the litter box have thus far not been temporally associated with the victim's having an episode of idiopathic cystitis.

Both cats have ample space in the three-bedroom home with access to perches, windows, and toys, and they are provided brief periods of play with the owner almost daily. Their food and water bowls are near each other, and no aggression occurs there—the cats eat together. The cats do not sleep or rest together or groom each other.

No other pets live in the household, and the owner is retired but active and lives alone.

A. Adding to and spreading out the litter boxes in this case was an excellent step in increasing the number and proper spacing of core areas in the household. Core areas are places in a cat's environment where valued resources are located. These mainly include food and places to eliminate (litter boxes). The idea is to spread these core areas out so that one cat cannot control access and thereby force other cats in the household to eliminate outside the litter box or reduce food intake.

The rule of thumb is to provide one litter box per cat in the household, plus one additional one. So, in this case, three boxes is appropriate. Adding additional feeding stations would also help reduce the tension in the home even though overt aggression is not seen between the cats at feeding time. Cats can hide anxiety very well; they are not as obvious as dogs are in displaying these emotions.

The behavior of the aggressor in this case, in my opinion, is not normal. This cat is spending a large part of its time budget each day patrolling and stalking the victim. Providing the additional litter box, increasing play time, and enriching the environment with perching opportunities should have decreased this problem to a more tolerable level. It is difficult to say why it has escalated recently, but I suspect there was some relationship issue between the cats that sparked the uptick in aggression.

Because the environmental management has been handled well, I think there needs to be a focus on the use of psychoactive medications for the aggressor to reduce the focused behavior it is having toward the victim. I have had good success with lorazepam in these types of cases. This benzodiazepine does not have the same potential for causing hepatic necrosis that can be seen with diazepam. I typically begin with giving one-quarter of a 0.5-mg tablet twice a day and increase the dose if there is insufficient response or decrease it if excessive sedation is seen. Mild to moderate sedation is common, and most cats adjust to these effects over a week or two, so I would hold the dose if these signs are, in fact, mild.

If things go well, maintain the dose for four to six weeks, and then gradually decrease the dose over a three- to four-week period, going back to the previously effective dose if signs recur at a lower dose. Perform a baseline complete blood count and serum chemistry profile (including a total thyroxine concentration measurement if the cat is near or over 10 years of age since aberrant behavior patterns can occur in hyperthyroid cats) before starting the lorazepam therapy. Repeat these tests two to three weeks later and then every six months while the cat is receiving the medication. 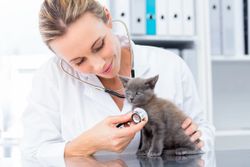 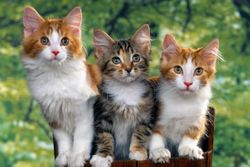