A recent study challenges the use of tramadol for canine osteoarthritis.

A placebo has no therapeutic action. However, the improvement in clinical signs (or development of side effects) associated with the administration of a placebo-the placebo effect-is a well-known phenomenon that affects human patients and caregivers alike. Physicians and veterinarians are not immune to its effects. Too easily, the improvement exhibited by a few patients can seemingly prove the efficacy of a treatment and promote further use in other patients. To avoid this bias, clinicians rely on evidence-based medicine and the use of placebo-controlled clinical trials to ascertain whether the effects of a medication are indeed beneficial.

In the last 10 to 15 years, tramadol has been widely used to control pain despite a lack of scientific evidence to support its use. Pharmacologically, dogs are known to produce insufficient amounts of the metabolite of tramadol that is responsible for analgesia, and the bioavailability of this metabolite drops significantly within one week of regular use. Clinically, few studies have been performed evaluating the efficacy of tramadol in veterinary species. That is, at least, until February of this year when a clinical trial was published that examined whether or not tramadol is effective for the management of pain associated with canine osteoarthritis.

Forty dogs with radiographically confirmed osteoarthritis of the elbow or stifle were included in a randomized, blinded, placebo-controlled, crossover study. All dogs received each of the following treatment regimens for 10 days, with at least a week of washout between treatment periods:

Carprofen: 2.2 mg/kg every 12 hours (morning and night, with a placebo midday)

The dogs received these treatment regimens in random order, and all medications appeared identical.

To evaluate treatment response, force-plate analysis and pain scoring (using the Canine Brief Pain Inventory) were performed before each treatment period (baseline) and on the last day of each treatment regimen. A force plate measured vertical impact (VI) and peak vertical force (PVF) to measure the arthritic limb's weight-bearing ability. To calculate the pain score, the owner assessed the severity of the dog's pain and the degree to which pain interfered with daily activities.

In this study, the effects of tramadol were similar to the placebo. Although some patients may improve while taking a placebo, the improvement cannot be attributed to its action. For a medication to be considered effective, it must produce a significant benefit as compared to the placebo. In this study, carprofen proved therapeutic for the pain and dysfunction of canine osteoarthritis, whereas tramadol did not.

So, if an arthritic patient improves while taking tramadol, is it just the placebo effect? The results of this study suggest that it is.

Dr. Amy Van Gels practiced companion-animal medicine for seven years before becoming a freelance medical writer and editor. Drawing on her practical experience, she creates clinically relevant articles for veterinarians and their staff, training documents for sales teams, and educational materials for pet owners. Dr. Van Gels is passionate about relaying accurate medical information to everyone who impacts patient care, at every level of medical knowledge. 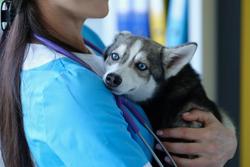