MYK-461 shows promise as a novel veterinary approach to treating the disease at a molecular level.

Hypertrophic cardiomyopathy (HCM) is an inherited heart disease that is common in people and in cats. In both species, HCM is characterized by a thickening of the left ventricle caused by increased contractility and decreased relaxation of the cardiac muscle. This can also often result in left ventricular outflow tract (LVOT) obstruction.

Current treatments for cats are largely symptomatic and do not alter the course of the disease. However, MYK-461 is a novel drug that inhibits sarcomere contractility to address the causes at a molecular level.

Five cats previously diagnosed with feline HCM and LVOT obstruction were anesthetized and underwent a baseline echocardiographic examination. The cats were then given atropine and an infusion of isoproterenol to bring their heart rates back to the pre-anesthesia values where LVOT obstruction was present and underwent another complete echocardiographic examination.

Next, the cats received an infusion of MYK-461. Echocardiography was performed at several time points during different rates of infusion. The infusions of both MYK-461 and isoproterenol were then stopped. Once their heart rates returned to baseline anesthetized levels, the cats underwent a final echocardiographic examination. All cats recovered uneventfully from anesthesia.

MYK-461 shows promise as a novel approach to treating HCM by working at a molecular level to decrease hypercontractility and increase muscle relaxation through inhibiting sarcomere contractility. Furthermore, MYK-461 was demonstrated to not have some of the negative effects of other commonly used negative inotropes, such as beta blockers and calcium channel blockers.

The researchers postulate that by attacking HCM at its molecular root, it may be possible to prevent disease progression in cats-a hypothesis that is more than just idle speculation. Although the authors don't mention it specifically, a previously published paper by some of the same authors showed MYK-461 as effectively preventing progression of HCM in mice.1 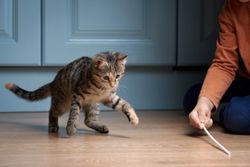 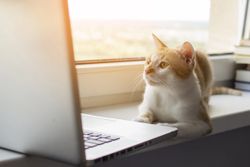