The importance of meeting an immediate need: A photo gallery of pets in acute pain 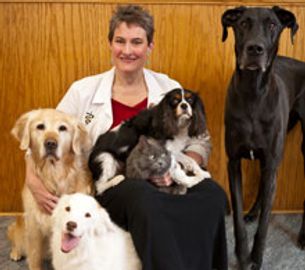 Gone are the days that a veterinarian allows pain to linger because it'll soon subside, right? Sadly, not in every clinic. Here are some signs and situations to look for so you can step in and save the day.

You may have seen our photo gallery of pets in chronic pain, illustrating not only signs of pain but also the variety of measures you can take to alleviate the pain, all thanks to Robin Downing, DVM, MS, DAAPM, DACVSMR, CVPP, CCRP. The photo gallery here is a little tougher to take as it highlights some of the signs of patients in acute pain, usually postoperatively. Dr. Downing reached out to her colleagues for photos they have seen of pets in pain that could have been easily alleviated with all of the pain management options now at a veterinarian's disposal. Don't let this happen to another precious pet.

A happy ending to come …

(All photos courtesy of Dr. Robin Downing)This dog-not a patient of Dr. Downing's-is trying to sleep standing up after undergoing a splenectomy. Because his postsurgical pain was not controlled, he could not lay down or get comfortable. Luckily, his pain was recognized and he received appropriate pain medication and-voilá-he was able to lay down and fell asleep. “The transformation from what is pictured to OK is usually pretty quick,” says Dr. Downing.

In contrast with the dog unable to sleep postoperatively, here's Emma, who had just undergone an ovariectomy. Dr. Downing says she's sleeping not because she is still under the effects of anesthesia-she's sleeping because she's very comfortable.

This poor kitty-not a patient of Dr. Downing-is holding her leg up with a intravenous (IV) catheter inserted. “You can see her face,” Dr. Downing says. “This is not a happy cat. Her whiskers are pointed forward, she looks worried and her face is not relaxed.”

… and the comforted cat

In contrast to the previous cat, Dr. Downing says this is what we want to see postop-the cat is hanging out, nice and relaxed. She had undergone abdominal surgery and was sleeping-not curled up like a cinnamon bun (another sign of pain).

A leg up on recovery

Not one of Dr. Downing's patients, but this dog is feeling fine and sleeping after losing his front leg to bone cancer. He sleeping not because he's doped up after surgery but because his pain is controlled. “It's amazing how they can adapt,” Dr. Downing says, “but they can only adapt if they're comfortable.”

This dog-not a patient of Dr. Downing's-had been attacked and the wounds had penetrated into his chest. Dr. Downing says you'll note that postop he's in pain. In fact, he's holding up his foot so he doesn't stretch his incision. “It's not what we want to see,” she says. “It's a repair of a penetrating wound to the chest and that's not how it's supposed to go.”

A big abdominal surgery led to big postoperative pain in this cat, which was not one of Dr. Downing's patients. Those caring for him postop had tried to put a bandage on him, but it had slipped upward. “So now we have a cat who has a painful incision and a bandage that's up around his armpits so he can't lay down,” Dr. Downing says. “You can certainly see his face and he's uncomfortable and unhappy. If he were in my hospital he would never look like this. But if he came to my practice looking like this, we would intervene with intravenous pain medication and he wouldn't look like that for long.”

Again, not a patient of Dr. Downing, here's another dog experiencing postoperative pain. He's sitting upright, panting and unable to lay down. “I still encounter veterinarians who see this and think, ‘Well, that's just how it is. He'll be OK in a little bit,'” says Dr. Downing. “No, he won't be OK in a little bit. We have an obligation to make him OK right this minute. And the good news is that with an injection of medication into that intravenous line, we can make that dog comfortable.”

A quick lesson in administration

Dr. Downing had to take two dozen bladder stones out of this shih tzu. She had no capacity for urine at all. But the moral of the story here is the four pumps in the photo. In each of the three lined up on top, a different type of pain medication is being delivered. The fourth smaller pump on the bottom contains intravenous (IV) fluids for maintenance. The three different pain medications are being delivered in microscopic doses at such a low flow that Dr. Downing would not be able to get them into the vein if they weren't being carried into the vein with the IV fluids. “There's kind of an undercurrent in the profession that we can just throw a few pain drugs into the IV fluid bag and call it good,” Dr. Downing says. “And I think that's ridiculous because each of the medications that I use serves its own purpose and I withdraw them one at a time. If my patient gets more painful, I need to be able to adjust each one of them up or down. If I just jam them all into one IV fluid bag and I have just one pump going, I don't have control over those meds.”

The key to a quick recovery

This corgie had ruptured an intervertebral disk, causing him to be paralyzed and in a lot of pain. He had surgery to repair the disk, and Dr. Downing transferred him back to her practice when he was released from the specialist so he could begin physical therapy, which consisted of laser therapy, acupuncture and adequate pain management, that day. Dr. Downing says this dog never had a painful day after surgery. As pictured, neuromuscular training on an underwater treadmill became part of his therapy as well after his incision healed. “He basically went from bad to complete function within four weeks of his spinal surgery,” says Dr. Downing.

When Dr. Downing first started learning acupuncture techniques, one of the first indications the instructor discussed was masticatory myositis, which this dog was suffering from. If he tried to open his mouth, he would scream. Since the pain is caused by inflammation, the traditional treatment is massive doses of corticosteroids, but this can cause the muscles to atrophy. Although she has seen few cases of this rare condition, Dr. Downing has had great success with acupuncture. “I had one dog that I treated just one time and he was completely resolved,” Dr. Downing says. For this dog, after the first day of acupuncture, he was able to eat by scooping food into his mouth. This dog's condition resolved with three treatments. Dr. Downing's general advice on using acupuncture for acute pain: “I might treat an acute episode two to four times a week for two to three weeks and then be done.”