Image quiz: Are you on the nose with this nasal issue?

Jessica Romine, DVM, DACVIM, is a small animal internal medicine specialist at BluePearl Veterinary Partners in Southfield, Michigan. She has a special interest in interventional radiology and advanced imaging procedures.

When a veterinary patient presents with sneezing and obstructive nasal breathing in your practice, how are you diagnosing the patient? Take the quiz to see if you're right.

A 5-year-old, 4.5-kg female spayed Dachshund mix was presented for acute onset of sneezing and obstructive nasal breathing. Approximately three weeks prior, the dog had begun sneezing and reverse sneezing, and stertorous breathing had been noted. The dog was started on enrofloxacin with minimal improvement, and clindamycin was added a week prior to presentation with no change. No discharge or epistaxis was noted and the dog was not coughing or gagging, but snoring was now noted whenever the dog was at rest. The dog was still eating and drinking normally but would not bark, which was very unusual for this patient.

How would you diagnose this patient?

Scroll down for the answer and official diagnosis!

The correct answer is A: Rock foreign body

This patient was small, weighing approximately 10lbs, limiting evaluation of the nasal cavity with rhinoscopy. Thus, a CT scan was elected, which allowed for clear identification and localization of the stone lodged in the nasopharynx. There was a large amount of purulent discharge and exuberant inflammatory tissue surrounding the stone, which made its dislodgement difficult, but successful removal was achieved with caudal traction using ratigator forceps and a retroflexed endoscope.

The nasal cavity and nasopharynx were then thoroughly flushed with saline, and the patient was discharged on a

Post-endoscopythe dog was reported to be doing very well other than minor stertorous breathing noted at night, likely a result of residual inflammatory tissue.

Nasal foreign bodies are one of several possible reasons for congestion and upper respiratory signs. The young age of this patient paired with the sudden and persistent sneezing raised a high index of suspicion for a foreign body.1,2

In a study, the mean age of presentation for nasal and nasopharyngeal foreign bodies was 5.7 years, and sneezing was present in 86% of cases, versus only 48% with epistaxis and 29% with nasal discharge.3 The lack of a response to antibiotics is likely attributable to location-often, dogs with foreign material in the nasal cavity will present with purulent nasal discharge, with the nature of the discharge improving with antibiotics as secondary infection is treated. However, signs classically return rapidly after antibiotics are discontinued because the underlying cause is still present.

As mentioned, this patient was smaller than is typical of a dog with a foreign body, as dogs weighing more than 10kg (or 22lbs) are statistically more prevalent for these cases.3 Overall, nasal foreign bodies are significantly less likely to be the cause of upper respiratory signs than nasal neoplasia, chronic rhinitis or fungal rhinitis, with studies reporting that foreign bodies make up 5 to 7% of cases.4,5 Dogs are known to inhale a variety of objects, with 81% of foreign bodies being vegetal, 14% mineral and 4.8% artificial material in one study.3 In our practice, other findings include carpet fibers, muzzle whiskers, Cuterebra and horseshoe nails.

Nasal foreign bodies should be particularly suspected in cases of acute onset of sneezing, with or without nasal discharge, and with a minimal or temporary response to antibiotics. Rhinoscopy can often identify the material, but advanced imaging may be required to localize the objects and allow for planning for best approaches for removal.

Jessica Romine, DVM, DACVIM, is a small animal internal medicine specialist at BluePearl Veterinary Partners in Southfield, Michigan. She has a special interest in interventional radiology and advanced imaging procedures. 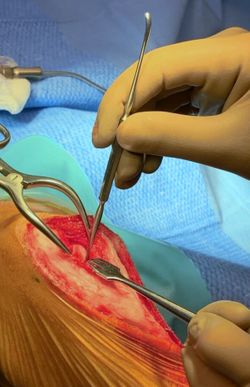 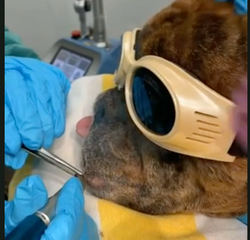 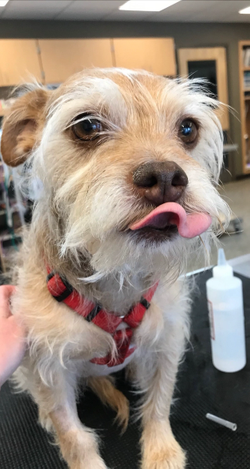