Early detection and aggressive treatment are essential in the successful management of this tumor.

Early detection and aggressive treatment are essential in the successful management of this tumor, which emphasizes the importance of a rectal examination as part of a routine physical examination in all animals. Treatment typically requires a multimodal approach involving surgery, radiation, and, potentially, chemotherapy.

Staging tests include abdominal ultrasonographic and three-view thoracic radiographic examinations. Evidence of local spread to the iliac lymph nodes is common, occurring in 40% to 72% of cases at presentation.3-8 This metastasis to the iliac lymph nodes can occur early in the course of disease while the anal sac tumor is still quite small.8 Lateral abdominal radiographic findings can suggest a soft tissue opacity in the sublumbar region, causing ventral deviation of the colon. Abdominal ultrasonography has higher sensitivity than does radiography in detecting iliac lymphadenopathy and can better characterize the number and size of lymph nodes and evaluate the remainder of the abdomen for evidence of distant metastatic disease (Figure 2).1 Pulmonary metastatic disease occurs less commonly and can be identified as a nodular or diffuse pattern on thoracic radiographs.1 Other uncommon sites of metastasis include the spleen, liver, and lumbar spine.4 The information gathered during staging will help guide treatment and formulate a prognosis.

When technically feasible, surgery is the initial treatment of choice for anal sac adenocarcinoma limited to the primary tumor and local lymph nodes. Surgery may also be indicated in dogs with distant metastatic disease as a palliative measure if the tumor is causing clinical signs. The primary mass should be surgically resected with the intent of complete excision. Because of the tumor's local infiltration, location, and large size at presentation, an aggressive surgery with wide margins often is not possible. Fecal incontinence is a potential complication, which can be temporary or permanent. Other postoperative complications include wound infection, which can result in dehiscence or sepsis, hypocalcemia, and perianal fistula formation.3,8 Early surgical intervention is important, as the masses can be fast-growing, and a window of opportunity may be missed if the mass becomes inoperable. In dogs with hypercalcemia, even incomplete resection can lead to normalization of calcium concentrations postoperatively.3

If the iliac lymph nodes are enlarged, an exploratory laparotomy should be performed for assessment and resection if possible. In cases of hypercalcemia, the tumor cells within the lymph node can secrete PTH-rP, so primary tumor resection alone may not result in normocalcemia. Additionally, enlarged lymph nodes that are not surgically removed will continue to grow and eventually will likely result in obstipation and tenesmus.

Two small case series reported lymphadenectomy and excision of the primary tumor in four and five dogs, with a mean survival of three years in the first series and a median survival of 20.6 months in the second series; two dogs were still alive at 19 and 54 months.11,12 No surgical complications were noted in any of the cases. Another retrospective study found a significant survival advantage in dogs with anal sac gland carcinoma that underwent primary tumor removal and lymph node removal compared with dogs whose metastatic lymph nodes were not removed.6 The lymph nodes may be easily resected in some cases, but they can also be friable and invade the large blood vessels that surround them. Referral to a board-certified surgeon is advised for lymphadenectomy because of the difficult location and potential complications. Fatal hemorrhage is possible, and neurologic damage can lead to transient or irreversible urinary incontinence.3,4 In a few cases in which complete resection is possible, adjuvant treatment may not be required to attain long-term survival, but more data are needed to determine whether recurrence or metastasis develops in dogs treated with surgery alone.6

Because of the difficult location of the tumor and local invasiveness, marginal resection is often performed, and recurrence is common, reported in 45% to 50% of dogs.3,4 Adjuvant treatment is recommended in cases of marginal excision to increase local control and decrease the risk of recurrence.

Postoperative. Postoperative radiation is used in cases in which clean margins are not obtained with surgery. Radiation is started at suture removal, when the surgical incision has healed, and is administered over a course of three to five weeks. Radiation to the lymph node bed should also be considered after iliac lymph node resection in which disease breaches the capsule since a margin of normal tissue cannot be obtained in this location. The lymph node bed may also be radiated prophylactically in patients that did not have enlarged lymph nodes at presentation since that is the most common location for the development of future metastatic disease.7

Complications. Because of the location of anal sac adenocarcinoma and the iliac lymph nodes, many sensitive normal tissues, including the perineal skin, anus, rectum, and colon, may receive unavoidable radiation, and, consequently, side effects can be severe preoperatively and postoperatively. Acute complications that occur during and several weeks after treatment include colitis, tenesmus, moist desquamation of the perineal skin, and perineal discomfort (Figure 3A).7,8 Topical treatments (vitamin E, aloe, commercially available radiation creams), Elizabethan collars, and intensive pain management are required in most cases. Antibiotics may be required to treat secondary skin infections in some patients. Colitis can be managed with fiber supplementation and metronidazole. The side effects are typically self-limiting and resolve several weeks after radiation is finished (Figure 3B).

3B. The same dog as in Figure 3A one month later showing resolution of the erythema and moist desquamation.

Late complications occur months to years after radiation therapy and may present as chronic problems such as chronic diarrhea, chronic tenesmus, rectal stricture, fecal incontinence, and colonic perforation.13 The use of smaller fractions of radiation per dose is associated with a lower risk of these complications.13

Palliative. Radiation can also be used as a palliative treatment in dogs that are not candidates for definitive treatment with surgery and radiation. Palliative or hypofractionated radiation therapy typically consists of larger doses (6 to 8 Gy) of radiation given weekly for three or four weeks. The goal of this therapy is to provide a good quality of life by relieving clinical signs associated with the anal sac mass or enlarged iliac lymph nodes for a limited amount of time. Palliative radiation therapy is often used in patients with a guarded prognosis due to distant metastatic disease, extensive local disease, or concurrent illnesses. Also, some owners may decline definitive treatment because of cost, time commitment, or concerns about morbidity. In our experience, partial regression or stabilization of tumor size with alleviation of clinical signs is achieved in about three quarters of cases treated with hypofractionated megavoltage radiation therapy (Figures 4A & 4B).

4B. A lateral caudal abdominal radiograph taken of the same dog as in Figure 4A three months after palliative radiation therapy, showing a partial reduction in the size of the iliac lymph nodes and less compression of the colon as it enters the pelvic canal. (The staples were placed during surgery to aid in radiation planning.)

The survival time for dogs with anal sac adenocarcinoma varies, and retrospective studies have attempted to identify significant prognostic factors. The overall median survival time in two larger studies evaluating 80 and 113 dogs was 479 and 544 days, respectively.6,8 The dogs in these studies received a wide variation in treatments, including surgery, radiation therapy, and chemotherapy, making it difficult to draw conclusions about the effect of individual treatment modalities or effective chemotherapy protocols. In the larger study, dogs that underwent surgery as a part of their treatment had an improved survival time compared with dogs that received chemotherapy alone.8 Larger tumors, the presence of distant metastatic disease, and hypercalcemia have been variably associated with a significantly decreased survival time.3,6,8 The median survival time was higher at 956 days in a study of 15 dogs that were all treated in the same manner with surgery, radiation, and mitoxantrone chemotherapy.7 None of the tumors in the dogs in this study had spread beyond the iliac lymph nodes, which may have contributed to the lengthy survival time.7

Because of the prognostic significance of tumor size at diagnosis and the presence of metastatic disease, the most favorable prognosis can be expected with early detection and aggressive treatment. Although hypercalcemia has been associated with a decreased survival time in some studies, it has not been a consistent finding.4,7,11 The presence of hypercalcemia should not warrant a more conservative approach, given that favorable responses and prolonged survival times with appropriate treatment have been reported.7,11

Anal sac adenocarcinoma is a locally invasive tumor with a high rate of metastasis to the local lymph nodes. Clinical signs may be associated with partial obstruction of the colon or rectum by the primary tumor or enlarged metastatic lymph nodes. In many cases, the tumor is an incidental finding on routine physical examination. Hypercalcemia is present in up to half of cases and may contribute to the presenting clinical signs; it typically resolves with surgical removal of the tumor. Routine staging includes a complete blood count, a serum chemistry profile, a urinalysis, thoracic radiography, and abdominal ultrasonography. A multimodal treatment approach is recommended, with surgery and radiation therapy providing local control. The ideal chemotherapy protocol for preventing or delaying recurrence or the development of metastatic disease is still undefined. Early detection and treatment are imperative to achieving the most favorable outcome.

Tips and tricks for protecting dogs from cancer 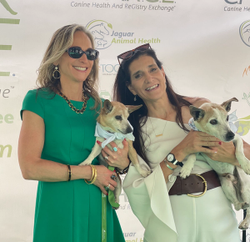 Celebrating hope for future of canine oncology with Take C.H.A.R.G.E