The frustrating and sordid history of the Great Flea War

Although the level of invasion is down drastically compared with the past, we've yet to conquer this tiny foe. Once more unto the breach, troops!

Those of you not in veterinary practice before 1989 may not remember what it used to be like for us with fleas. A long time ago, fleas were a part of everyday life for most people. You'd pick your fleas off your body before you went to sleep at night. It was so common, it was even depicted in works of art. Fleas were responsible for the death of millions of people.

A blast from the past

Want to make a parasiticide the real old-fashioned way? Take a barrel, put it over a fire, fill it half-full with water, fill the rest with turpentine, add about 50 pounds of tobacco plant, boil for a couple of days and, voilà-you have yourself a nicotinoid-based horse dewormer and dog dip. (Many of the products we use to this day are related to this old-fashioned approach in that they contain neonicotinoids.)

As time went on, we made a little progress in treating or preventing fleas and the diseases they carried. Chemical dips here, chemical bombs there-and hardly ever 100% success. I know a veterinarian who built an entire out-building at his practice to hold his flea products back in the day!

Then, in 1989, the big breakthrough in battle occurred! Parasitologists figured out that fleas don't actually live in the couch and bedding and leaf litter-they live on animals. They feed immediately and continuously on the animal. This gave us enemy intelligence and opened up a whole new way of thinking: Eureka! Treat the animal! Things moved rapidly from there: In 1993 the first International Symposium on Ectoparasites in Pets was held, in 1994 lufenuron was introduced, and in 1996 imidacloprid and fipronil joined the fight. For the first time, you could give something to a pet that really worked against fleas and their infestations.

Give yourselves a hand!

Look how far we've come. Since the advent of flea preventives, you have changed and saved so many pets' lives by providing flea control-no more relinquishment to shelters because of home infestation and flea bite allergies.

The human cost of flea infestation

They say that war is hell, and fleas carry some pretty horrible diseases for pets and people. Here in the United States, the big three that Ctenocephalides felis carries are cat scratch disease, murine typhus and plague. Let's look into each a bit to demonstrate how bad things can get if we halt forward progress or lose ground.

This disease is traditionally associated with young cats and kittens. It is transmitted to people when a cat is bacteremic and bites someone or is carrying the bacteria in its nail beds and scratches a person. The result seven to 12 days later can be a solitary swollen lymph node, encephalitis, neuroretinitis, endocarditis and bacillary angiomatosis. Most cases of cat scratch disease occur September through January because it is transmitted when people think they no longer need flea protection and quit giving it too early.

Interesting fact: This affects you, too! 7% of veterinary professionals are seropositive!1 No big surprise there, right?

Found now in California and Texas, typhus in people can cause a high fever, a maculopapillary rash, headaches, chills, myalgia and malaise with concurrent respiratory, neurologic and gastrointestinal symptoms such as abdominal pain and hepatomegaly. The organism's life cycle suggests that the domestic cat plays a role, but the exact role cats play in transmission of the disease is unclear.

Plague, AKA The Black Death

It is thought that Y. pestis pretty much just showed up from Asia and unpacked its steamer trunks in the San Francisco area in 1905. It spread among rats there, but was relatively contained for a time. Then the 1906 San Francisco earthquake occurred. Did the quake send the rats running? No, in fact, for two days after the quake, everything was relatively calm. But lights were run by gas back then and fire spread and consumed most of the city. This, of course, chased all the rats out of the city and into the surrounding area.

Plague has now spread across the United States. It took a long time to get across the California mountain ranges, and then it took longer to get across the Rockies. It is now spreading across Texas. The only things at this point that appear to be stopping it are the Missouri and Mississippi rivers. Once it crosses the Mississippi river, it is free to spread to the east coast. Reverse “manifest destiny,” anyone? The current hot spot for The Black Death is the Four Corners region in the West.

This bacterium is maintained mainly in wild rodent reservoirs including rats, rock squirrels, ground squirrels, prairie dogs and chipmunks. It is transmitted by two rodent fleas as well as through direct exposure to the tissues, secretions and respiratory droplets of infected animals or people.

Plague can present in one of three forms-bubonic, pneumonic or septicemic. Most cases reported worldwide are of the bubonic form, but in 2006, of the 17 cases reported in the United States, 35% were classified as primary septicemic plague. Humans with cutaneous exposure usually develop the bubonic form, whereas humans exposed through inhalation develop the pneumonic form. If left untreated, the bubonic form can spread to the lungs and develop into the pneumonic form, allowing the infected individual to spread the disease to another person through respiratory secretions.

Bringing it back to the clinic

Through extensive research, other parasitologists and I have discovered that it is possible to flea comb every single flea off an animal. (But who has got graduate students enough to do that?) Vacuums are effective as well, both on carpet and the pet itself-some pets like to be vacuumed! There are even some cats that will groom 200 fleas off their body overnight! (I know because I applied them to the cat!) Obviously those are not candidates for my flea studies.

I'll leave you with this: Don't feel guilty about making profits on flea control products. Last year, it cost me $600 for the anesthesiologist to come into my hospital room for a quick consult the night before my surgery. When you can charge that much for your service, then it might be OK for you to start feeling bad about paying for a new ultrasound machine (that will help all your patients) with profits made from products that work and keep your patients healthy. Until then, remember the bad-old-days and charge on with confidence to win the Great Flea War!

Dr. Bowman teaches veterinary parasitology in the College of Veterinary Medicine at Cornell University. Dr. Bowman has written and edited four textbooks on the parasites of domestic animals.

Download and proudly display this poster to prompt your veterinary clients to ask about the array of flea preventives you offer. 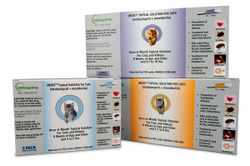 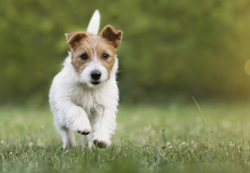