The feline facets of Cushing's disease

Unregulated diabetic? Fragile skin? Recurrent UTIs? Your feline veterinary patient might have Cushing's! Dr. David Bruyette shares everything you need to know about diagnosis and management of cushingoid cats.

Yes, cats can get hyperadrenocorticism, or Cushing's disease, but it's not quite the same as in dogs-because, well, cats, of course. Fetch dvm360 conference speaker David Bruyette, DVM, DACVIM, Chief Medical Officer at Anivive Lifesciences and CEO of Veterinary Diagnostic Investigation and Consultation, discussed the latest updates on this adrenal anomaly in our feline friends.

Let's get down to diagnosis

As in dogs, Dr. Bruyette says diagnosing Cushing's disease in cats relies on patient history, signalment, physical examination findings, adrenal testing and imaging. Cats with Cushing's tend to be older, but the disease can be seen in cats as young as 4 years of age. Unlike in dogs, there is a sex predilection for hyperadrenocorticism in cats, with 75% of cases occurring in females. What's underneath the ailment? Dr. Bruyette says 80% of cushingoid cats likely have pituitary-dependent disease, while 20% are due to adrenal tumors, of which half are benign and half are malignant.

The signs. Cats with Cushing's disease often have comorbidities, such as recurrent urinary tract infections (UTIs) or diabetes mellitus. The problem that a lot of us run into is that the clinical signs of polyuria, polyphagia, polydipsia, muscle wasting and hepatomegaly are the same for diabetes and Cushing's disease. Dr. Bruyette says that vets usually accidentally back into a diagnosis of hyperadrenocorticism in diabetic cats that are difficult to regulate or have become insulin-resistant.

Other common clinical signs in cushingoid cats are severe dermal atrophy and alopecia. Thin, shiny skin in a geriatric cat is pathognomonic for hyperadrenocorticism or pancreatic carcinoma in cats. (Dr. Bruyette pro tip: If you see a cat with thin skin, don't scruff it! You may end up with a pelt and a bad Yelp review.)

The thin skin of a cat with Cushing's disease. (All photos courtesy of Dr. David Bruyette)The minimum database findings. Unlike dogs, Dr. Bruyette says cats don't have a steroid-inducible isoform of alkaline phosphatase (ALP), so cats with Cushing's will not have high ALP activity. Cushingoid cats tend to be more resistant to the effects of corticosteroids and tend to not have a stress leukogram, and their urine specific gravity tends to be greater than 1.020, making diagnosis from a minimum database darn near impossible. They do, however, tend to get frequent UTIs, as do diabetic cats, so Dr. Bruyette says it is a good idea to routinely culture the urine of cats affected by either disorder.

Stimulation testing. The standard dosage of cosyntropin (Cortrosyn) in cats is 0.125 mg (half a vial) per cat, but Dr. Bruyette says that the canine dose of 5 µg/kg also appears to be adequate. To perform this test, obtain a blood sample before cosyntropin administration and then another sample one hour after administration. Dr. Bruyette recommends administering cosyntropin intravenously in cats and says that reconstituted cosyntropin can be stored in the vial in the fridge for 30 days or be frozen for up to a year in a plastic syringe.

Suppression testing. The adrenal-pituitary axis in cats is not as easily suppressed as it is in dogs and requires a different dosage than in dogs, Dr. Bruyette says, because, well, cats. He says that the dose that works best in cats is actually the dose for high-dose dexamethasone suppression testing in dogs, which is 0.1 mg/kg given intravenously; blood samples are taken before administration, after four hours and after eight hours. A 30-minute post administration sample is not necessary, says Dr. Bruyette.

Suppression testing has a 90% sensitivity in diagnosing Cushing's disease, Dr. Bruyette says. Dexamethasone suppression testing can be affected by nonadrenal illness, however, and since most of these cats are diabetic, this can present a diagnostic problem. If you are performing a suppression test for Cushing's disease in a newly diagnosed or unregulated diabetic cat, then you may get a false positive result. Dr. Bruyette says to get the diabetes under control as best you can, even if that means giving the cat relatively high doses of insulin, and then test for adrenal function.

UCCR. When it comes to the urine cortisol:creatinine ratio (UCCR), Dr. Bruyette says that this isn't as simple in cats as it is in dogs, of course, because, cats. It's very difficult to get the first voided morning sample of urine from even an indoor cat, especially three mornings in a row. Hospitalizing the cat for a morning cystocentesis will also result in a lot of false positive results. The main value of a UCCR is ruling out Cushing's disease-if the ratio is normal, the cat doesn't have Cushing's. If the UCCR is high, you will still need to run suppression or stimulation testing.

Abdominal ultrasonography in cats is a challenge because the adrenal gland is tiny in cats-only 3 mm thick in a normal cat! You have to first find the little suckers, and if you are lucky or skilled enough to do that, you have to measure the thickness. If you've spent any time driving an ultrasound probe, then you already know the right adrenal can be very difficult to locate on abdominal ultrasound. In addition, Dr. Bruyette says adrenal mineralization is a normal aging change in cats but indicative of adrenal disease in dogs; plus, cats can have confounding, incidental adrenal or pituitary growths that actually have nothing to do with Cushing's. Data on the clinical relevance of incidental adrenal or pituitary masses is lacking, says Dr. Bruyette.

You can also measure endogenous ACTH in cats, but only a dog assay is available. If your stimulation or suppression testing indicates Cushing's, you then measure endogenous ACTH. If it comes back normal or high, that reliably indicates pituitary-dependent disease. If it comes back low, Dr. Bruyette says we don't know what that means, which, as you know, is problematic when you now have an owner who has just spent $100 on a test that is nondiagnostic. History, physical exam and a combination of imaging and adrenal testing are your best bets for an accurate diagnosis.

Dr. Wooten's thoughts for curtailing the cost of Cushing's rechecks

Urinalysis relief. If one of my patients is asymptomatic for a UTI, I would recommend a urinalysis and culture every six months. Urine culture can be pretty pricey and present a cost barrier to your client. We get around this by using the local dairy authority laboratory, which can do the cultures for us at a fraction of the cost.

Reasonable trilostane rechecks. What about measuring baseline cortisol instead of stimulation testing to save client's money? I know a lot of practitioners who are checking baseline cortisol concentrations instead, so I asked Dr. Bruyette for his recommendations on this. He said that this practice is being looked at currently both in the United States and Europe, and there will be a consensus statement coming out in the next couple of months for new guidelines for monitoring patients on trilostane aimed at dogs since trilostane use in cats is extralabel in the United States.

Adrenal tumors are best treated with surgical removal, Dr. Bruyette says, because it cures the disease. He recommends getting Cushing's under control before surgery, however, since affected cats have poor wound healing and tend to throw clots.

Your medical options include trilostane, mitotane and metyrapone. Mitotane has the same toxicity concerns in cats as in dogs, so Dr. Bruyette reserves it only for cats that have failed to respond to trilostane. Selegiline doesn't work in cats. Ketoconazole works well to lower cortisol concentrations in people and dogs, but it doesn't suppress well in cats (because, cats), and the doses required to suppress cortisol secretion in cats has been found to be hepatotoxic and associated with thrombocytopenia.

Metyrapone is an adrenal enzyme blocker used in people. The main problems with metyrapone are that it requires administration two to three times a day, becomes less effective over time, and, according to Dr. Bruyette, is the foulest tasting substance on the planet. Plus, the capsule is as hard as concrete. (How does he know, you ask? Well, as any good veterinarian would do, he chewed on the capsule).

A cat with Cushing's disease before trilostane treatment.

The same cat with Cushing's disease after trilostane treatment.Dr. Bruyette says trilostane is the best option at a dose of 2 to 3 mg/kg/day.1 Drug monitoring for trilostane in cats is the same as in dogs: Recheck electrolytes and perform a stimulation test four to six hours after administration seven to 10 days after starting therapy. If everything measures normal, Dr. Bruyette recommends rechecking the electrolytes and performing ACTH stimulation testing in one month and then every three to four months after that. 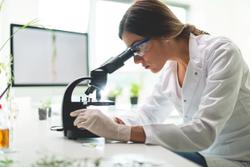 What is the best insulin for diabetic cats?