Periodontal probing should be a part of every in-depth oral examination that is followed by professional dental cleaning. Measuring the depth of the gingival sulcus will help you determine the extent of a tooth's attachment, which will aid in deciding whether to extract a tooth, especially if dental radiography is unavailable to you.

To properly hold the probe, use a modified pen grasp. Put the instrument between your thumb and index finger (Figure 2A). Then bring your middle finger toward the probe's shank (Figure 2B).

Figure 2A & 2B: The modified pen grasp; the instrument is first grasped between thumb and index finger (A), and then the middle finger is brought toward the probe's shank (B).

Figure 3: The modified pen grasp is used when probing the right maxillary canine tooth; the hand is supported with the ring finger on an incisor tooth.

Do not harm when probing the sulcus

Measure the gingival sulcus at a minimum of six points around each tooth's circumference-at three spots on the labial or buccal side and at three points on the lingual or palatal side. Do not keep the tip of the probe inside the sulcus when probing all around the tooth; doing so can seriously damage the gingival attachment.

Instead, walk the probe inside the sulcus. By applying gentle pressure, insert the probe, then withdraw it, insert it again a couple of millimeters farther away, withdraw it, and so on until you've probed around the tooth's circumference (Figure 4).

Figure 5: The difference between periodontal pocket and attachment loss is demonstrated in a dog cadaver; there is about 2 mm of gingival recession (A; dotted line indicating original gingival margin) and an about 6-mm pocket depth (B), totaling an 8-mm attachment loss. 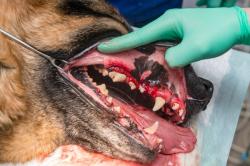