Common ticks in the US affecting dogs

Liza Rudolph, BAS, RVT, VTS (CP-CF), SAIM, outlines ticks that target dogs, their geographical distribution, when they are active, and diseases they carry

Why are ticks a growing concern for veterinary professionals? According to Liza Rudolph, BAS, RVT, VTS (CP-CF), SAIM, program director of veterinary technology at Rowan College of South Jersey in Sewell, New Jersey, this is because the geographical distribution of ticks is expanding along with the array of diseases they carry due to temperature fluctuations, movement of animals and people, and more. Thus, during her presentation at the 2022 Atlantic Coast Veterinary Conference (ACVC) in Atlantic City, New Jersey, Rudolph detailed information on common ticks in the United States for veterinary professionals to warn clients of and bear in mind.

There are 2 different species of deer ticks, one that lives in the east coast and the other in the west coast. They are found in wooded areas around homes and tend to hide in leaf litter and other places they can conceal themselves. “Even if you're in a suburb, and maybe you have like a [line] of trees or something on the side that separates those houses, that's still technically a wooded area, that's where ticks can still live, you don't have to be in the middle of nowhere for ticks to be there,” Rudolph emphasized.

Adult deer ticks gravitate towards dogs and are active in the cooler months, while nymphs are more active in warmer months and prefer people. “When you talk to owners, and they say, ‘Oh, those ticks, they're really active in the summer.’ Yeah, for [the owners]. But…actually, if we're talking about from a purely dog point of view, the time from October to February, when they're most active, is exactly when pet owners are going to stop prevention,” Rudolph said. Therefore, she explained, it is important to inform clients of this activity, so their pets maintain year-round prevention.

Deer ticks distribute Lyme disease, but Rudolph added, “the species that carry Lyme disease also cause anaplasmosis, human babesiosis, and ehrlichiosis.…It's not like one tick equals one disease. So sometimes they can have coinfections going on at the same time.”

Rudolph shared that brown dog ticks find their homes in houses and kennels and hide once they are established.

Because brown dog ticks don't usually like to live outside, they’re technically active year-round. Though, there is an increase in them in the spring or summer when it gets warmer.

According to Rudolph, brown dog ticks are the primary vector for ehrlichiosis. They can also transmit the human and canine babesiosis.

Like deer ticks, Lone Star ticks are found in wooded areas, and their geographical distribution is growing in North America. “I'm sure you can probably assume that ‘oh, [the Lone Star tick] used to be probably more [in the] south than the north and you are right. I can tell you that it ended up in Ontario, [Canada]. A veterinary university up there does some research as far as tick diseases and they have Lone Star ticks in Ontario…that's more proof that they're just expanding,” Rudolph said.

The adult Lone Star ticks prefer dogs and are active in the spring and summer, including February through June, while nymphs are active May through September and target humans. “There's some overlap, but just generally speaking, that's what they like to gravitate towards during those particular life cycles,” said Rudolph.

Rudolph also noted that Lone Star ticks are particularly aggressive. “If you've ever been online and you've seen videos of like a tick swarm, it's usually these guys and it's crazy how fast they can move when they're in large groups,” she said.

This tick is another ehrlichiosis carrier, plus it carries rocky mountain spotted fever and southern tick-associated rash illness, which is something that is still being researched in human medicine, according to Rudolph.

American dog ticks live in fields. “So tall grassy areas, fields, meadows, that sort of thing. If you're walking through there, they kind of like to jump on your pants, and then kind of go from there,” said Rudolph.

Generally, adult American dog ticks that prefer dogs are active in the spring and summer, while nymphs’ activity is all over the place.

These ticks are known for carrying Rocky Mountain spotted fever, but they can also carry anaplasmosis, ehrlichiosis, and tularemia. “You can kind of see that how, if there's multiple ticks, multiple different species, that the opportunity for potential disease transmission is pretty high,” Rudolph added. 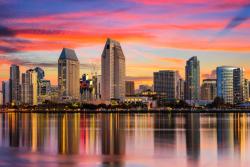