The loss of more than $60,000 and interruption of her veterinary practice wasn't what kept Dr. Marlene Pinera awake at night...

DAVIE, FLA. — The loss of more than $60,000 and interruption of her veterinary practice wasn't what kept Dr. Marlene Pinera awake at night, it was not knowing why one dog had died, 59 others were sick and medication wasn't helping.

It wasn't until Pinera sent the deceased dog's body to Dr. Cynda Crawford, a canine influenza expert at the University of Florida, that it was determined through testing, canine influenza was the culprit.

Unlike any other day: One walk-by from a stray dog in a boarding facility was the infection source for a second canine influenza outbreak at Dr. Marlene Pinera Davie, Florida practice. Ultimately, the virus was isolated in 60 dogs from her practice on two separate occasions.

"I actually felt relieved when I was told the infection was canine influenza," Pinera says. "I then knew I didn't do anything wrong."

Crawford was able to isolate the virus from tissue found in the dog's lungs, Pinera says, marking the occurrence as the first case in non-Greyhound dogs, proving the clinical signs of the virus weren't limited to the breed.

The Aycock Veterinary Clinic tracked the initial infected animal down to a stray brought to the facility by animal control officers, which was bathed on the patio of the clinic.

"The dog wasn't at the practice much more than an hour," Pinera says. "But the kennel staff walked the boarding dogs past the stray, systematically infecting 45 dogs."

It was only a matter of days before the first boarded dog started showing signs of the virus, which at the time was thought to be kennel cough by the two-doctor staff.

In days following the initial boarded dogs' symptoms were known, owners called describing complaints of coughing, marking the point Pinera knew it had spread outside the boarding area.

"A canine influenza outbreak wasn't the first thing that came to mind when dogs were coughing and acting lethargic," Pinera says. "When we did realize what we were dealing with, we closed the practice to canine clients, seeing only cats for three weeks and treated all infected dogs for free.

The first outbreak occurred in August 2005, once treatment was finalized with the infected dogs, Pinera says she recalls feeling like things were back on track, then Hurricane Wilma struck in October, taking off portions of her practice's roof.

In February of 2006, her practice was hit with another canine influenza outbreak, despite installed protocols, including restrictions on dogs boarded in the kennel. Both outbreaks cost Pinera an estimated $60,000.

"We require all dogs be vaccinated at least two weeks before they are to be boarded, and we do not accept new clients that frequent dog parks," Pinera says.

Once the practice was closed to dogs and boarded dogs were returned to their owners, the staff disinfected every room of the facility with bleach, donning masks, shoe booties, gowns and gloves. Every employee and doctor cleaned.

"It was shocking to me that my practice was able to become contaminated in such a short time, spreading to every dog," Pinera says. "There is no single phrase that can describe the emotional impact this virus had on my practice. I can say it spread faster than anything I've encountered as a practitioner. Cleaning was very thorough and so was hygiene among the staff. This thing just came out of nowhere."

The staff was careful not to take the virus home to their pets, eliminating contaminated material before entering their homes.

"I have two dogs, and I had to strip down to my skivvies in the garage before going inside," Pinera recalls. "That's what all of us had to do to protect our dogs."

Seven months after the last outbreak, Pinera still finds herself investigating every cough and sneeze heard regardless of the task she is performing at the time.

"The biggest problem for the first outbreak was concluding what we had on our hands and how to treat it," Pinera says. "But the virus can pass through the most stringent cleaning protocol, a dog only needs to breath to be exposed." 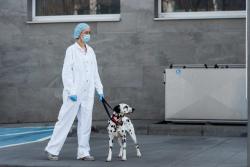 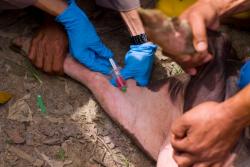