This screening test1—developed by researchers in the Comparative Genetics and Orthopaedic Research Laboratory at the University of Wisconsin-Madison School of Veterinary Medicine—marks one of the first of its kind for this common canine disease, and consists of just a cheek swab that can be collected at home or a small blood sample.

The screening test was made available in September for Labrador retrievers as approximately 5% to 10% of these dogs will rupture a cruciate ligament in their life.1 Now, the research team is aiming to extend the development of predictive genetic testing to other breeds displaying high risk of cruciate rupture, such as Rottweilers and Newfoundlands.

“In dogs, ligament degeneration and progressive rupture of collagen fibers in the ligament tissue leads to the development of knee joint instability over time,” shared Peter Muir, BVSc, MVetClinStud, PhD, DACVS, DECVS, FRCVS, laboratory co-director and a professor in the Department of Surgical Sciences at the UW School of Veterinary Medicine, in an association release.2

According to the release, genetic factors and additional characteristics (eg, physical health, body condition, and neutering) contribute to chronic ligament degeneration. Identifying if a dog is genetically predisposed to rupture a cruciate ligament enables the owner and veterinarian to implement preventive measures, including maintaining a healthy weight for the dog and ensuring they are aware of signs of emerging injury.

Muir noted2 that the genetic markers for cruciate ligament ruptures are more complex than markers for other traits. Many genetic tests search for a specific DNA mutation to detect whether a certain disease or trait is present. However, the predilection for cruciate ligament rupture results from multiple gene variations throughout the dog’s genome.

The researchers used a method called array genotyping to identify genetic markers for more than 1000 Labrador retrievers. Through examining the DNA and gene variants in various samples, the team could uncover the small variants related to cruciate ligament rupture.

Along with promoting a proactive approach, this test can help breeders decrease the incidence of cruciate ligament ruptures in Labrador retrievers over time to improve the breed’s genetic health. Testing costs $250 and results take 4 to 6 weeks. 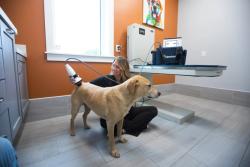