Normal movement of fluid between these compartments is governed by the permeability of the particular tissue membrane and the concentration of molecules located across the membrane barrier. The compartments all contain solutes dissolved in water. Quantity and size of the solutes is an important determinate to the volume of body fluid within the compartment. Body water flows fairly freely in most compartments and moves from areas of lower concentration of solutes into areas of higher solute concentrations. Electrolytes may travel freely between intravascular and interstitial compartments, but they require a transport system to move into cells. Cellular membranes contain ion channels and solute pumps that exchange electrolytes into and out of the cells. The ATPase pump is the most important of these pumps that function to exchange sodium out of the cell in exchange for potassium into the cell. This pump generates the electrochemical gradient across the cell membrane. Macromolecules (>20,000 daltons in size) cannot easily cross the normal vascular membrane, and they attract smaller charged particles. Such naturally occurring macromolecules within the vascular space are albumin, globulin, and fibrinogen.

COP, or colloid osmotic pressure, is the force generated by the concentration of impermeable solutes within the intravascular space that helps to retain fluids. COP is a measurable value of the macromolecular solutes contained in a serum sample. Hydrostatic pressure is an outward pressure within the confines of the vasculature and the natural tendency of water to move out of the fluid compartment. Osmotic pressure is an attractant draw of water into an area of higher concentrations of solutes; thus providing a pull of fluid into a compartment. Explaining these in simple terms would be as follows. Hydrostatic pressure can be described as the pressure of a water hose, full of water, but contained at the end by a trigger sprayer. The water would be pushing out against all sides of the hose trying to move outward. And osmotic pressure can be described as the attraction children feel when standing near a small candy display in a grocery store, but looking at a very large selection of candy on the other side of the store. The larger supply of candy would pull more children to that side of the store, just as a larger concentration of solutes would pull water out of a compartment.

Five types of edema have been identified as a result of impaired balance between fluid compartments. 1. Increased hydrostatic pressure, 2. reduced osmotic pressure, 3. lymphatic obstruction, 4. sodium retention, and 5. inflammation/increased vascular permeability. This presentation will touch on each of these, but is not intended to list all of the possible disease processes that could manifest edema. Also note that several types of edema, as listed here, may be present concurrently due to the complexities of a disease process.

Increased hydrostatic pressure may result from conditions that alter actual volume or pressure of the blood within the vasculature. Aggressive intravascular volume loading, fluid overloading, backward heart failure, or impaired venous return may result in increased hydrostatic pressure. Examples would include respectively: fluid diuresis in treatment of anuric renal failure, overzealous fluid replacement, left sided heart failure, or pericardial fluid accumulations. Pulmonary edema is a very common manifestation of the fluid shifting that occurs due to increased hydrostatic pressure. Left sided heart failure is the most commonly seen cause of pulmonary edema. As mentioned earlier, several inciting factors (listed 1-5 above) may be present concurrently and result in edema formation. Hydrostatic edema during renal failure will also have contributing edema caused by sodium retention. A blood clot causing venous congestion will also produce inflammation and cause edema from increased vascular permeability.

Edema often results from a reduced osmotic pressure and manifests during many disease processes. Edema due to hypoproteinemia is a commonly recognized form. Hypoproteinemia, is defined as total serum protein of <5.4gm/dl in dogs and <5.9gm/dl in cats, and can result from decreased globulins, decreased albumin, or both. Decreased COP is commonly due to hypoalbuminemia. The most commonly seen causes of hypoproteinemia are usually related to protein loss from the vasculature or organs (gastrointestinal or renal systems), or decreased production from the liver. Remember that as proteins are either lost from organs or are at too low number the oncotic pull of the remaining proteins in the vasculature is less and fluid will be attracted to those areas that have higher concentrations (peritoneum or pleural space). Examples include: protein losing enteropathy, protein losing nephropathy, and liver failure. The resulting edema manifests as third spacing of fluids into the pleural or peritoneal cavity or accumulation within the interstitium.

Edema formation due to lymphatic obstruction can be exemplified in patients that have a neoplastic disease process or post surgical swelling that obstructs lymphatic flow. Lymphoma patients with large lymph nodes in the neck or groin area may have facial, airway, or rear leg swelling. Chemotherapeutics to shrink lymph node size and external warm packs to promote blood flow would be beneficial. Sodium retention is an inciting cause of edema formation. Sodium is a solute that is freely transportable across cell membranes meaning that it will attempt to equalize in both the intracellular and extracellular space. In cases of renal failure where the kidneys cannot excrete sodium adequately, increasing levels of sodium will occur in the extracellular space. As a result the osmotic pressure of the interstitial space may become greater than the osmotic pressure of the intravascular space. A pressure gradient will form that serves to pull fluid out into the interstitial space. And finally, edema may form as a result of inflammation, ischemia, or sepsis causing increased permeability of cell membranes. Insults to the vascular endothelium, result in cellular membranes that become increasingly permeable or "leaky" and allow larger size particles to exude into the interstitium. Once the larger size particles leak out into the interstitium, osmotic pressure gradients are created and serve to pull more fluids out of the vasculature. Any disease process causing ischemia to tissues or systemic inflammation response may manifest with complications of edema. Cases of severe pancreatitis are widely recognized as developing considerable tissue edema and bicavitary (pleural and abdominal) effusion.

Edema can present as a life-threatening condition or a more chronic complication of disease. In cases of heart failure and pleural effusion immediate action is necessary. The use of diuretic drugs and thoracic drainage would be indicated. Treatment for nonemergent presentations would be focused on treating the underlying disease while attempting management of tissue or cavitary edema. Diuretics are very commonly used to manipulate increased hydrostatic pressure and increased sodium retention edemas. Local management of edema is indicated in some cases of lymphatic obstruction edema where very large lymph nodes or swelling of an extremity may be involved. In cases of hypoproteinemia, administration of large molecular weight colloid solutions or commercially available human albumin solutions may be indicated. The large size protein molecules will increase the intravascular oncotic pressure and function to retain fluid within the vessels. When inflammation or sepsis has altered membrane permeability the focus of treatment would be identification and alleviation of the inflammatory condition responsible. Typically the prognosis for successful management of edema is dependent on the ability to treat and resolve the underlying disease. 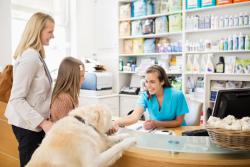