All canine lymphomas are not created equal (Proceedings)

Canine lymphoma has long been regarded and addressed as a single disease entity, while human lymphomas are classified in numerous classes and subclasses, each with a distinct presentation, prognosis, and accepted therapy.Indolent, or low-grade, lymphomas constitute a unique subgroup of lymphomas that often may behave differently than the archetypical high-grade canine multicentric lymphomas.

Canine lymphoma has long been regarded and addressed as a single disease entity, while human lymphomas are classified in numerous classes and subclasses, each with a distinct presentation, prognosis, and accepted therapy.Indolent, or low-grade, lymphomas constitute a unique subgroup of lymphomas that often may behave differently than the archetypical high-grade canine multicentric lymphomas. The veterinary literature is scarce regarding the many variants of canine lymphomas, their clinical presentation, prognosis, and therapy. Recent findings suggest that canine indolent lymphomas are not as uncommon as they once were thought to be, and that their optimal therapeutic approach may need to differ from classical multicentric high-grade lymphomas.

Epitheliotropic T-cell lymphoma (CTCL), including mycosis fungoides, Sézary syndrome, and pagetoid reticulosis, is the most common form of canine cutaneous lymphoma, and also appears to necessitate therapy that is different than standard therapy for multicentric high-grade lymphomas.

Similar to high-grade lymphomas, indolent lymphomas can be classified based on the cell type, via immunophenotyping, and then further categorized in specific subtypes by an experienced anatomic pathologist. Using the human WHO classification, the most common variants of canine indolent lymphomas include marginal zone lymphoma (MZL), follicular lymphoma (FL), and mantle cell lymphoma (MCL), all from B-cell lineage, and T-zone lymphoma (TZL), a lymphoma of T-cell type.

In general, dogs with indolent lymphomas will be middle-age to older (median 9 years), and have no clinical signs of illness associated with their lymphoma (substage a) at initial diagnosis. Currently, there is no known breed or sex predilection, although retriever and terrier breeds may be overrepresented. It may be more common with certain types of indolent lymphomas (FL, MZL) to have only one or two lymph nodes enlarged at diagnosis, to involve only the spleen (MZL, MCL), or to have a history of long-term (months to years) slowly developing multicentric lymph node enlargement (TZL). This latter presentation is in marked contrast to the traditional high-grade lymphomas that present with acute lymphadenopathy, typically in a multicentric fashion, and rarely live longer than 1-2 months when left untreated. While hypercalcemia is a common paraneoplastic syndrome observed with approximately 40% of classic intermediate or high-grade T-cell lymphomas, we have not observed hypercalcemia in more than 40 cases of TZL.

Dogs with CTCL have a mean age of 9 to 12 years, and can present with lesions at an early stage such as erythroderma, patch, or plaque stage, or with the more advanced tumor (nodular) or disseminated stage, or even the leukemic stage also known as Sézary syndrome. Cutaneous lesions often have been present for months prior to the definitive diagnosis of CTCL, and oral or mucocutaneous lesions are other fairly common sites of involvement.

Contrary to the archetypical high-grade lymphomas, with which a diagnosis can be reached via fine-needle aspiration and cytology demonstrating a monomorphic population of lymphoblasts, tissue biopsies and histopathology are compulsory to confirm a diagnosis of indolent lymphoma, and determine the variant. Frequently, patients with indolent lymphomas may have been formerly diagnosed as having "lymphoid hyperplasia" upon cytology and, in fact, true low-grade lymphomas may arise in areas of chronic hyperplasia that ultimately progressed to malignant transformation. With solitary lymphadenomegaly, an excisional biopsy (lymphadenectomy) is recommended, and the whole lymph node is to be submitted for histopathology and immunohistochemistry. Likewise, when splenomegaly or a solitary splenic nodule is suspect for lymphoma on cytology, splenectomy and submission of the entire specimen for histopathology will permit a definitive diagnosis. When a dog presents with multiple enlarged lymph nodes or generalized lymphadenopathy, an incisional lymph node biopsy can be obtained, either with a skin punch or large bore tru-cut biopsy needle (12 or 14G), whereby a sufficiently large sample is obtained for architectural evaluation, and allows for a definitive diagnosis to be reached. Clonality tests have been developed that can help confirming a 'true neoplasia', but are generally not mandatory if the tissues are evaluated by an experienced anatomic pathologist via H&E and immunohistochemistry.

The definitive diagnosis of CTCL is also obtained via tissue biopsies (skin punch) and histopathology, often with the help of immunohistochemistry with B and T cell markers.

The current recommendation for confirmed or suspected canine indolent lymphoma and CTCL cases is to perform clinical staging procedures in a similar fashion to that carried out for high-grade lymphomas. This includes measuring and recording all gross lesions in the medical record, performing chest radiographs and abdominal imaging (radiographs +/- ultrasound), performing fine-needle aspiration and cytology of suspect visceral organs (liver, spleen), and obtaining bone marrow samples for cytology.

In many cases, it appears that canine indolent lymphoma is diagnosed incidentally, although a certain number of dogs with MZL present with sudden and rapid lymph node enlargement, sometimes following chronic mild lymphadenopathy. Left undiagnosed and untreated, it is possible that many indolent lymphomas may not markedly impinge on quality of life or survival time. However, it seems that many cases of indolent lymphomas in late stages of progression eventually will behave clinically like high-grade lymphomas, and may have actually made that transformation.

At present there are no firm recommendations for a specific therapeutic approach to canine indolent lymphomas, given that they only recently were better described as a precise entity in dogs. For such lymphomas presenting in solitary sites (single lymph node, spleen) and with an apparently indolent clinical course, surgical resection of the entire disease burden via lymphadenectomy or splenectomy, without adjuvant chemotherapy, may result in prolonged control of the condition. In 3 dogs receiving splenectomy as the sole therapy for their splenic MZL, none died from the disease during follow-up (7 to 19 months). Similarly, we are aware of many dogs with stage I (solitary node) MZL or TZL treated with lymphadenectomy alone and without evidence of progression 1 year after diagnosis. If the clinical disease progresses in a way similar to high-grade lymphoma, with rapid nodal enlargement, multiagent cytotoxic therapy should be considered. Many dogs with MZL presenting as multicentric lymph node involvement eventually have a clinical progression similar to high-grade lymphomas, often so at initial diagnosis. These dogs should be treated with standard multiagent chemotherapy protocols, typically incorporating prednisone, vincristine, cyclophosphamide, and doxorubicin. Such CHOP-based protocols have permitted good remission rates and a median first remission of 9 months in clinically high-grade MZL and FL cases, in a manner not dissimilar to high-grade B-cell malignancies.

The TZL often appears to behave differently, and could be a variant of low-grade lymphoma that will not clinically progress as often to late-stage or adopt an aggressive clinical behaviour, based on follow-up information on more than 40 dogs. Most of these dogs with TZL initially presented with multicentric lymphadenopathy (clinical stage IIIa), and many dogs left untreated or receiving solely prednisone +/- an oral alkylator, chlorambucil being the most common, had long survival times following diagnosis (median not reached, >18 months). The longest survivor lived 7.5 years following diagnosis, with marked multicentric lymphadenopathy, and without any therapy.

The preferred therapy for CTCL in dogs may vary depending on the distribution and extent of the disease burden (clinical stage), but also typically differs from that of high-grade multicentric canine lymphoma. For example, with solitary or superficial lesions ('early disease'), the therapeutic strategies may include local therapy, also known as skin-directed therapy, such as surgical resection, radiation therapy, or topical treatments. While surgery and radiation therapy have merit in select cases, topical therapies, which may include corticosteroids, retinoids, certain chemotherapy agents (mechlorethamine, carmustine), and imiquimod, are rarely indicated for dogs with CTCL since a majority presents with multicentric cutaneous involvement or dissemination. Systemic therapy with disease-modifying agents provides an interesting approach, mostly because it may reach disseminated disease while generally being very tolerable with relatively few notable side effects in dogs. Systemic disease-modifying agents with modest reported activity in canine CTCL, when used in monotherapy, include retinoids, such as isotretinoin, and fatty acids, in the form of linoleate (safflower oil).

Only few studies discuss the use of systemic chemotherapy for canine CTCL. Reports on small number of dogs treated with CHOP-like protocols demonstrated moderate success, and survival times averaging between 2 and 6 months. One report discussed a protocol combining cyclophosphamide, vincristine, cytosine arabinoside, and prednisone (COAP) on 6 dogs with CTCL, with 5 dogs achieving partial or complete clinical remission. While some efficacy has been noted in sporadic cases treated in monotherapy with agents such as L-asparaginase, dacarbazine, and doxorubicin, the most robust data regarding response of canine CTCL to a single agent was recently published, in two studies totalling 82 dogs. In both studies, the oral alkylating agent lomustine (CCNU) was administered every three weeks, at a median starting dose of 60-70 mg/m2 , and was generally well tolerated. Of 82 dogs, 21 (25%) achieved a complete clinical remission, and 45 (55%) achieved a partial clinical remission, for an overall remission rate of 80%. However, the median duration of remission in both studies was disappointing at around 3 months. There are no large studies evaluating the combination of systemic disease-modifying agents with cytotoxic chemotherapy, but such a multimodality approach appears rational considering the non-overlapping toxicities. Finally, supportive and symptomatic therapy also appears to be important with canine CTCL cases, especially to control secondary infections and pain in afflicted dogs.

Canine indolent lymphomas are intermittently diagnosed, and may represent a more common entity than was previously thought. While some cases will behave in ways similar to the more common high-grade lymphomas, often responding very well to multiagent systemic chemotherapy, others will have a prolonged clinical course that may not require aggressive therapy for long survival time and good quality of life to be achieved.

Epitheliotropic cutaneous lymphoma is a relatively uncommon cancer that also has a fairly indolent course initially, but that may progress aggressively and systemically with time. Various therapeutic approaches, including skin-directed therapies, disease-modifying agents, and systemic chemotherapy, may provide improved quality of life and survival time in dogs diagnosed with this variant of canine lymphoma. 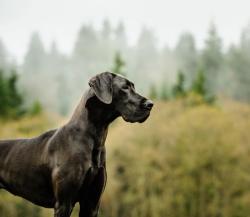