The ABCs of veterinary dentistry: O is for oral masses of the malignant kind

The histopathology report from the oral biopsy came back as malignantnow what? Surgery? Radiation? Chemotherapy? Watchful waiting?

Hemangiosarcoma: A malignant neoplasm of vascular endothelial origin characterized by extensive metastasis; has been reported in the gingiva, tongue and hard palate.

Lymphosarcoma: A malignant neoplasm defined by a proliferation of lymphocytes within solid organs such as the lymph nodes, tonsils, bone marrow, liver and spleen; the disease may also occur in the eye, skin, nasal cavity, oral cavity and gastrointestinal tract; also known as lymphoma.

Malignant melanoma: An invasive, malignant neoplasm of melanocytes or melanocyte precursors that can be pigmented or amelanotic, with a marked tendency to metastasize.

Osteosarcoma: A locally aggressive, malignant mesenchymal neoplasm of primitive bone cells that have the ability to produce osteoid or immature bone with a high metastatic rate.

Here are the most commonly diagnosed malignant oral tumors in dogs and cats:

Malignant melanoma. Malignant melanoma is a locally aggressive tumor that's common in dogs and rare in cats and often metastasizes to the lungs (Figures 1A and 1B). Aggressive surgical excision, including partial mandibulectomy or maxillectomy, is the treatment of choice. Tumor sizes less than 2 cm carry a better prognosis than those greater than 4 cm.

However, radiation may have a role in effectively treating the primary tumor. In cases deemed nonresectable, or if an owner is unwilling to pursue surgery, radiation therapy has a high response rate (70% to 90%). Most protocols utilized are classified as hypofractionated in that they require only a few treatments, but each treatment has a high dose, or fraction. This involves three to four weekly fractions of 8 Gray or six weekly fractions of 6 Gray.

Figure 1B. Cytology of the oral mass in Figure 1A consistent with melanoma.Side effects, including oral mucositis, are generally mild and self-limiting with hypofractionated protocols. Similar to surgery, patients treated with radiation therapy may achieve local control but generally succumb to metastatic disease. Survival times of seven to nine months are common.

The Oncept Canine Melanoma Vaccine, DNA (Merial), is administered in stages II and III of canine oral melanoma and can decrease recurrence in some cases after removal or debulking of the primary tumor. The glycoprotein tyrosinase, which produces melanin found in melanoma cells, is the vaccine's targeted antigen. The vaccine appears to be effective in cases of amelanotic melanoma too.

In a 2016 study that retrospectively reviewed the outcome and survival of 32 dogs affected by oral melanoma that were treated with a combination of surgery and the xenogeneic DNA vaccination (with the addition of radiotherapy in some cases), the overall median survival time was 335 days, and the overall median progression-free survival (PFS) was 160 days.1 Disease stage, surgical margin completeness and vaccine administration delay did not appear to statistically influence survival or PFS, though these results may reflect the study's low statistical power due to small numbers.

Figure 2. Papillary squamous cell carcinoma in a young dog.Surgical excision is the primary treatment of choice for macroscopic oral squamous cell carcinoma in dogs, followed by radiation therapy for microscopic disease. Local recurrence is common. Piroxicam, a nonsteroidal anti-inflammatory (NSAID) agent given orally at a dosage of 0.3 mg/kg every other day, can be used for palliation with a median survival time of 180 days in dogs in one monotherapy study.2 A slightly higher median survival time (272 days) was achieved when piroxicam was combined with cisplatin or carboplatin.3

Squamous cell carcinoma is the most common oral tumor in cats and carries a grave prognosis if located caudally or if it affects the base of the tongue. If located rostrally, surgery is the treatment of choice when clean, wide (at least 2-cm) margins can be obtained (Figure 3).

Figure 3. Squamous cell carcinoma in a cat's rostral mandible.The NSAID meloxicam may have several beneficial effects in treating feline squamous cell carcinoma, including pain relief and reduced inflammation-associated neoplasia and edema. In the United States, meloxicam is licensed only as a one-time injection for perioperative pain in cats. In Australia and Europe, low doses (0.01-0.03 mg/kg a day) have been used to treat osteoarthritis in cats without significant side effects.

Fibrosarcoma. Diagnosed most commonly in the maxillae of large-breed dogs, fibrosarcoma is locally invasive but infrequently metastasizes to the lungs (Figure 4). It is the second most common oral malignancy in cats (after squamous cell carcinoma). A subset of fibrosarcomas has been recognized in which the tumors appear histologically low-grade yet behave as high-grade malignancies biologically (hi-lo).

Figure 4. Fibrosarcoma affecting a dog's maxilla.As with squamous cell carcinoma, aggressive surgical excision that includes part of the dog's or cat's mandible or maxilla is necessary. Radiation has been recommended to treat microscopic disease in fibrosarcoma tumors that are too large to obtain adequate margins. Hi-lo fibrosarcomas carry a poor prognosis regardless of surgery or radiation therapy. This may be partly due to the fact that most are associated with the maxilla and are thus more difficult to completely excise.

Osteosarcoma. Although malignant, oral osteosarcoma, which usually occurs in the mandible of dogs, may not be as aggressive as osteosarcoma of the appendicular skeleton in the dog (Figure 5). Osteosarcoma is rare in cats.

In cases of maxillary osteosarcoma in both dogs and cats, recurrence is common after surgery. Chemotherapy and radiation in the treatment of oral osteosarcoma have not been associated with an increase in survival.

For a quick reference of all the oral tumors that can affect dogs and cats, see the sidebar, "Oral malignancy nomenclature," on page 1.

How to handle oral malignancies

Diagnosing your canine and feline patients is only the first step. Here's what to consider next:

Talk frankly with the client. There can be little benefit from attempting to sugarcoat the diagnosis. If the mass is large, located caudally or has been present for a while, the prognosis is generally poor. Recently diagnosed small masses that are located rostrally generally carry a good prognosis when surgical excision with wide clean margins can be obtained. In some of these cases, radiation therapy combined with surgery adds to the favorable prognosis.

Find out more about the mass and the patient. Three-view thoracic radiographs need to be examined for metastasis. If present, surgery can still be performed, but the prognosis for long-term success is poor.

Further staging should include intraoral radiographs of the mass. The availability of computed tomography and cone beam computed tomography is a game-changer in treatment planning for oral masses in that they allow the practitioner to better view the whole iceberg instead of only the tip. The majority of malignant tumors will have evidence of bony involvement at the time of diagnosis; however, radiographic evidence of lysis does not occur until 50% of the bone has become demineralized (Figure 6).

Figure 6. Fibrosarcoma with extension into the bony hard palate.Surgery. In cases where metastasis is not present, the chance to cut is a chance to save-especially if excision can be accomplished with at least 2 cm of clean surgical margins in all directions. (Note: It's the “in all directions” part that often creates a challenge.)

Here's an overview of your surgical options:

Figure 7A. Partial mandibulectomy diagram. (All illustrations by Roxy Townsend)

Figure 7B. A surgical specimen from the squamous cell carcinoma patient from Figure 3.

Mandibular rim excision: A form of partial mandibulectomy in which the ventral border of the mandible is maintained (Figures 8A-8C).

Figure 8B. Surgical markings for a rim excision to debulk the lesion noted in Figure 2. Client would not approve of a rostral mandibulectomy.

Figure 9B. A segmental mandibulectomy to treat the melanoma noted in Figure 1.

Figure 12B. A palatal view of a fibrosarcoma excision with clean margins of mass noted in Figure 4.

Figure 12C. The patient from Figure 4 one year after surgery in continued remission.

Figure 12F. The surgical appearance of the mass in the patient from Figure 12E.

Figure 12G. A partial maxillectomy in the patient from Figure 12E.

Bilateral partial maxillectomy: Surgical removal of parts of the left and right maxillae and/or other facial bones and surrounding soft tissues; also called a bilateral rostral maxillectomy (Figures 13A and 13B).

Figure 13A. A bilateral partial maxillectomy to care for osteosarcoma noted in Figure 5.

Figure 13B. The patient has a normal clinical appearance after surgery.The bottom line? If you can catch and treat malignant masses before metastasis, there's hope for either a cure or at least a happier patient.

Stay tuned for the next installment, because “P” is for perioceuticals and periodontal sealants. 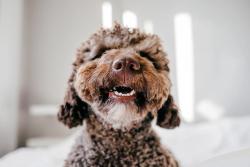