A voice for veterans waitlisted for service dogs

Veterans with PTSD have to wait years before qualifying for a service dog. To reinforce the need for service dogs in this population, a Purdue University scientist and associate professor provides scientific data revealing benefits like reduced anger, anxiety, and better sleep.

For many veterans with post-traumatic stress disorder (PTSD), waiting years for a service dog is not uncommon. To combat the extensive waiting lists, Purdue University College of Veterinary Medicine scientist and associate professor of human-animal interaction, Maggie O’Haire, is unveiling quantifiable data for these veterans as they wait for their animal companion.

With an increasingly growing waitlist for service dogs, O’Haire made it her mission to show the physiological and behavioral benefits service dogs have on veterans with PTSD, according to a Purdue press release.

“We continue to hear that service dogs are saving veterans’ lives,” she says, in the release. “Our research is intended to measure this. We see that the dogs are helping, but now the challenge is answering how exactly service dogs are helping and what to expect once you have one of them in your household. Service dogs for PTSD are not a cure, but for some veterans, they can offer benefits that make PTSD symptoms easier to manage.”

Furthermore, the study results shed light on the scientific evidence of mental health benefits of service dogs for veterans with PTSD. “The findings during that study also went beyond behavioral benefits and assessed cortisol levels because it is a biomarker in the stress response system,” says O’Haire.

Cortisol levels in veterans with service dogs was higher in the morning compared with those without them or on the waiting list. Healthy adults without PTSD exhibit rising cortisol levels in the morning as a natural occurrence after waking up. O’Haire’s research also revealed that veterans with service dogs experienced less anger, anxiety, and better sleep.

O’Haire recently replicated her initial service dog research using a larger sample study, and found that service dogs were associated with decreased PTSD symptom severity. She also conducted a trial to find out how couples are affected by veterans’ service dogs. Study findings showed that service dogs may improve resilience and relationship satisfaction.

To learn more about O’Haire’s most recent research, go here.​ 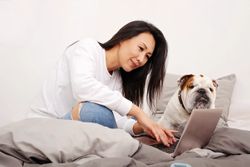 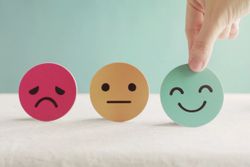 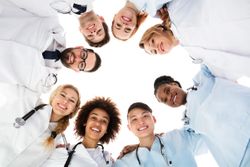