An exploration of the utility and urgency of treating taut muscle fibers in dogs with osteoarthritis.

Buster was a 4-year-old golden retriever that walked into my practice for a wellness exam and some routine vaccinations. As a part of all of my exams, I look for the presence of muscle pain-specifically something called myofascial pain syndrome (MPS). Buster had a strong reaction when I palpated his quadriceps and iliopsoas muscles for MPS. I had a discussion with Buster's owner and explained to her that this type of pain most often occurred secondary to pain somewhere else, and because of the pattern of pain it was most likely somewhere in the hind legs.

At this point the owner mentioned that Buster was no longer jumping up on the couch to sit next to her or on the bed to sleep next to her. She consented to radiographs, and we discovered that Buster had mild hip dysplasia and mild osteoarthritis (OA) of the hips. After instituting appropriate treatment, we followed up with Buster's owner, and she reported that he was doing much better-not only jumping up on furniture but initiating play more often, something she hadn't noticed had been in decline.

This is a typical story in my practice. Many owners (and even some veterinarians) write off a decline in activities-even activities the dog has always loved-as the result of old age. Clients bring their pets to us and don't even think to mention that something's amiss because they don't realize it themselves. The sad truth is that chronic pain issues are often not addressed when they're a problem just for the dog; they're addressed only when they become a problem for the owner.

Osteoarthritis is almost always a young dog disease secondary to conformational issues. For example, dogs with hip or elbow dysplasia will have radiographic evidence of osteoarthritis by the time they're 1 or 2 years old. However, it's often not diagnosed in young dogs unless the owner sees a mobility problem. Reluctance to go for long walks, walk across slippery surfaces, or jump in and out of cars is mistaken for something the dog just doesn't want to do, whether the reluctance has been there from the start or developed over time.

An inability to recognize these behaviors as signs of pain is itself a tragedy, because early diagnosis and treatment are vital. OA causes an increase in inflammatory mediators in the joint that inflame cartilage and cause pain, which in turn causes more severe OA. Round and round the insidious cycle goes until the joints become almost unusable. However, if OA is diagnosed early and treatment is initiated right away, this can slow the progression of the disease and give the dog a more comfortable life than it would otherwise have.

Myofascial pain detection can help both owner and veterinarian with the decision to pursue diagnostics such as radiographs, especially in young dogs. It's a hard sell to ask any dog owner to consider radiographic screening for joint disease when there are no obvious signs, especially if sedation is required. But when a veterinarian discovers myofascial pain and suspects underlying disease, he or she has taken the first step on the diagnostic pathway and the “sell” becomes easier.

MPS has been known to occur in every animal where it has been looked for-even sharks. MPS can also occur with other issues, especially secondary to orthopedic injury or surgery, traumatic injuries, and repetitive motions (such as in agility dogs).

So what is myofascial pain?

MPS has been discussed in the medical community for hundreds of years. But it wasn't until the 1940s when a cardiologist named Janet Travell noticed an odd pattern of muscle pain in some of her patients that her efforts brought MPS into modern medicine. Since then, there's been a huge amount of research and interest in treating MPS. A quick query on PubMed shows 16,795 scholarly articles on MPS. Yet many veterinarians and physicians have never heard of it-or if they have, they don't really understand what it is.

In the case of osteoarthritis, MPS occurs because of sustained low-level contractions in a muscle or group of muscles. When a muscle needs to perform a low-level contraction, only a few muscle fibers are enlisted for that action. This makes sense-if you wanted to drink a glass of water and used the entire biceps muscle, disaster would ensue.

What doesn't make sense is that whenever these low-level contractions occur, the same few muscle fibers are always used, and even if they become exhausted, no other muscle fibers jump in to help out. This has been referred to as the “Cinderella hypothesis.” The rest of the muscle, just like Cinderella's sisters, never helps out: the same fibers are the first to the task, do all the work on their own and are the last ones to “go to bed.”

If you want to do a quick experiment on yourself, pick up some small object near you and hold it in your hand, extending your arm horizontally in front of you. If it's something like an empty coffee cup, it probably weighs only a few ounces. Yet within several minutes your muscles will begin to ache and eventually it will become impossible to hold your arm out in front of you.

Now think about a visit to the gym, where you might be curling 10 to 20 pounds or more and not feeling the same degree of exhaustion as you just felt with a 4-oz coffee cup. That's because all of the muscle is pitching in for the job at the gym. The first example with the coffee cup is similar to what a dog with a painful limb will encounter, but the pain of putting full weight on the limb is often less than the pain of the “cramp” that came about from protecting the injured leg by holding it up to take the weight off of it. Eventually these constantly cramped and exhausted muscle fibers develop MPS.

Eventually these few muscle fibers become permanently contracted. It's beyond the scope of this article to explain all of the reasons behind this permanent contraction, but the short answer is that there is a lack of adenosine triphosphate (ATP), which is necessary for the sarcomere within this taut band of muscle to relax. This might seem counterintuitive; we think of muscles needing energy to contract, but the opposite is true as well-they also need it to relax. This is why we see muscles go into rigor mortis upon death when all the existing ATP is used up.

When these taut muscle bands occur, the entire muscle becomes shortened, just like pulling on a loose thread can cause an entire piece of fabric to shorten. The joint is compressed from the constant contraction, causing dysfunction in the joint dynamics. So not only is there muscle pain, but the reduced width of the joint space causes increased wear and tear on the joint.

The Dx and Tx of MPS

MPS is diagnosed by palpation of muscles. It's a hard method to describe but an easy one to employ once you've been shown how. The palpation technique requires gentle palpation across the muscle fibers in search of the taut band. It requires a light touch and a basic knowledge of muscle anatomy so you know how to palpate across the fibers and not along the length of the fibers.

Treatment of MPS can be done by one of several methods. The most common method is dry needling, wherein the taut band is palpated and an acupuncture needle is inserted into it. There are two methods of needle insertion, but both result in a relaxation of the taut band of muscle by utilizing a spinal reflex pathway that bypasses the ATP cascade.

Other methods include cold laser therapy and massage, which both increase blood flow to the affected area, thereby allowing for the mitochondrial production of ATP and the relaxation of the sarcomere. The dry needling is dramatic and instant, with immediate relief. The other methods take time to get results.

Do you need to treat MPS?

Yes and no. Sometimes MPS becomes a problem larger than the originating cause of the MPS, whether it's OA or a cruciate tear. In this case, if you address only the underlying cause-with a nonsteroidal anti-inflammatory drug (NSAID) or surgical repair, for example-the patient may not demonstrate a satisfactory response to treatment. But if the MPS is mild, aggressive treatment of the OA may allow the taut bands in the muscles to relax on their own as the muscles are used in a normal manner over time.

I have seen many cases where OA treatment has been unsatisfactory until the MPS was addressed. In addition, I have had cases come to me from surgeons where the surgery was a success but the dog wouldn't walk on the leg weeks or months after healing. I recall one West Highland white terrier that was two months out from a tibial plateau leveling osteotomy (TPLO) and wasn't using the leg. The surgeon was befuddled, the owner was angry and thinking of retaining an attorney, and the dog was in constant pain. One needling session later, the dog walked out normally, the owner broke down in tears of joy and everyone was happy. Of course, several visits were necessary to completely fix the issue-but after months of pain, no one was complaining.

How to grasp the cut-and-dry of dry needling

Interested in learning more about dry needling? It's taught in the acupuncture course by Curacore. If you don't want to learn both acupuncture and myofascial techniques, Myopain Seminars teaches a weekend class. If you just wish to read up on MPS, I recommend the excellent book Myofascial Trigger Points by Jan Dommerholt and Peter Huijbregts. 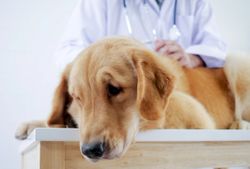 Speaking for our canine patients: How to find and communicate signs of chronic pain