There's Much More to the “Much Wow” Meme Dog

Shiba inus have been gaining popularity across the internet through a number of funny memes and listicles, but before taking one home with you, make sure that you do your homework.

Anyone who spends any amount of time searching the web has been met with memes of an adorable dog either stuck in a bush or a fence, or giving side-eye to a cat or owner. Narrating different possible internal monologues has become a trend across the web due to the fact that the dog’s expressions are not only cute, but relatable. Many reading this are calling to mind the memes of the “Doge” with taglines like “such cool,” or “much wow,” but do you actually know what breed of dog it is?

Web surfers’ interest in possibly owning these dogs continues to rise as well as the breed’s popularity, as countless memes are posted, commercials are produced, and listicles are trending across social media. According to the AKC, these dogs have ranked as the 46th most popular dog breed. However, with the rise in interest, there aren’t as many shibas in animal shelters finding their forever homes and staying there as one might expect, mostly because people are not educating themselves adequately enough on the breed and all of the work that goes into caring for shibas, according to the Huffington Post.

Zennia Barahona, president of the NYC Shiba Rescue, told the HuffPost, “The memes don’t represent the personality. The breed is not necessarily for everyone.”

According to an article published in Slate, despite the way the breed comes across in the many memes, it’s actually a very primitive breed and “is not always inclined to do what a human wants.” In fact, the National Shiba Club of America says that the breed enters into the world thinking “he is king,” sometimes taking it a little too far, making the breed a little hard to handle.

According to their official website, “If a Shiba could only utter one word, it would probably be ‘mine.’ It is ‘mine’ water, ‘mine’ toys, ‘mine’ sofa, ‘mine’ crate, ‘mine’ car, ‘mine’ owner, and ‘mine’ world…Some Shibas may carry ‘mine’ a bit too far and become aggressive in their resource guarding.”

If rigorously trained at any early age, they make for great companion animals; their independence and intelligence are a couple of the things shiba owners love most about the breed. However, if the work is not put into it, they will probably end up with behavioral issues or problems with aggression that will make them increasingly hard to care for.

On the official NYC Shiba Rescue website, they have a section completely dedicated to the most important question that owners should ask themselves before bringing home these furry companions: “Is a Shiba Right for Me?” Immediately under that title is a subtle warning: “Shibas are not recommended for first time dog owners, or the faint of heart.” If people don’t do their homework on the breed, they would not know how challenging owning a shiba can be, which can lead to more abandoned shibas.

As with most challenges, if the proper amount of work is put in, there are a number of rewards. Their independence and intelligence is just a couple of the things that shiba owners love about them. According to the NYC Shiba Rescue, “Sharing life with these wonderful, entertaining creatures is priceless. When your Shiba talks to you with its dark, penetrating eyes, and you understand what it’s saying, then you’ve earned your way into the heart of your Shiba.”

Once educated on proper care and training (using positive reinforcement with a number of treats and rewards, of course) owners will find that they are less hard to handle, according to Natalie Abutaha, founder and president of DC Shiba Inu Rescue. “That’s a big part of our rescue, educating the humans,” she said. 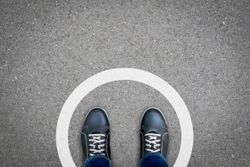