SSRI/SNRI toxicity: what you need to know

An expert outlines the risks and treatments.

Selective serotonin reuptake inhibitors (SSRIs) and serotonin norepinephrine reuptake inhibitors (SNRIs) are commonly prescribed antidepressants in the US1 (see Table), and companion animals, especially cats, frequently ingest them. Venlafaxine (Effexor), which inhibits the reuptake of both serotonin and norepinephrine, is one of the top medications cats ingest.2 Thus, it is vital that we recognize these intoxications and treat them appropriately.

Serotonin is found in receptors of various subtypes throughout the body, especially the brain (neurons), gastrointestinal (GI) tract, and vasculature, where it acts as a vasoconstrictor.3 After being released by neurons, serotonin may be reabsorbed by them or broken down by monoamine oxidases (MAOs). MAO inhibitors prevent the breakdown of serotonin, and both SSRIs and SNRIs prevent its reuptake. MAO inhibitors can also cause toxicity in dogs and cats with clinical signs similar to those of SSRI and SNRI toxicity. However, most veterinarians report the latter toxicity, probably owing to the omnipresence of these drugs.

SSRI/SNRI ingestion can be subclinical. Only 25% of the 313 calls made by dog owners to the Pet Poison Helpline between 2005 and 2010 concerned symptomatic animals.4 There were no significant differences in sex, age, and breed between symptomatic and asymptomatic dogs. It was difficult to determine what the toxic dose was, however, because there can be a significant overlap between the amount ingested by symptomatic and asymptomatic animals. Just 10 mg/kg of sertraline (Zoloft), the most commonly prescribed SSRI in the US, is believed to cause clinical signs in dogs.5 Similarly, 25% percent of cat owners who called an animal poison control center between 2004 and 2010 reported symptomatic animals.6 The main difference between cats and dogs is that the former are more likely to ingest venlafaxine (Effexor) and fluoxetine (Prozac).

Because most SSRI and SNRI receptors are found in the central nervous system (CNS), GI tract, and blood vessels, the clinical signs of toxicity with these drugs are neurological, gastrointestinal, and cardiovascular. CNS depression, agitation, tremors, and seizures are the most common signs of toxicity in cats and dogs. Hypertension is also possible in both species owing to serotonin’s vasoconstrictive effects.

In severe cases of toxicity, cats and dogs may develop serotonin syndrome (SS), a potentially life-threatening condition that has been better defined in people. For a diagnosis of human SS, one algorithm requires a combination of known or suspected serotonergic drug ingestion plus a combination of tremors, hyperreflexia, spontaneous muscle contractions, muscle rigidity, elevated body temperature, ocular flutter, sweating, and agitation.7 These signs are collectively known as extrapyramidal signs or drug-induced movement disorder.

Dogs and cats often have a history of serotonergic drug ingestion or some of the associated clinical signs without a witnessed ingestion. When ingestion is unconfirmed, it may help to ask owners about the medications their pets might have accessed and even request that they contact a person who may still be in their home to check for evidence of ingestion.

The time to onset (TTO) of clinical signs in dogs can range from 15 minutes to 24 hours, with a median of 2 hours.4 In cats, TTO is between 1 and 6 hours.6 What and how much is ingested, including food, also affects TTO.

The most frequent clinical signs in both dogs and cats are central nervous system (CNS) depression, vomiting, hypersalivation, and diarrhea. In some cases, CNS stimulation—tremors, hyperesthesia, or seizures—may occur. And there may be other clinical signs if the animal has also ingested other medications.

Serotonin and norepinephrine act as vasoconstrictors and can result in hypertension. Blood pressure should be evaluated in all patients with confirmed or suspected SSRI/SNRI ingestion. Severe hypertension can lead to hyphema, retinal hemorrhage, retinal detachment, and blindness.8 Thus, an eye exam should be performed in patients with hypertension. An electrocardiogram may reveal sinus tachycardia, which itself may be caused by serotonin, hypovolemia, or a combination thereof. In addition, hypertension can result in ventricular tachycardia and ventricular premature complexes.

Blood work in patients with SSRI/SNRI intoxication is nonspecific. Vomiting and diarrhea can cause hypochloremia, hypokalemia, hyponatremia, and hypernatremia. Hypovolemia may result in prerenal azotemia and/or hemoconcentration marked by increased hematocrit and total protein concentration. Likewise, there are no specific imaging findings associated with SSRI/SNRI intoxication, although foil wrappings may be visible on abdominal radiographs. Chest x-rays should also be taken because the risk of aspiration pneumonia is high.

Emesis can minimize the absorption of toxins, but its effectiveness depends on when it is induced. In general, it should be induced within 1 hour of ingestion, although it may sometimes be of benefit up to 4 hours after ingestion. The longer the time between ingestion and emesis, of course, the more toxin will be absorbed.5 Emesis induction should not be performed in patients with CNS depression because of the danger of aspiration.

Emesis is most commonly brought about with intravenous apomorphine at a dose of 0.03 mg/kg. With ingestion of a substance that has the potential to cause CNS depression, an FDA-approved product with selectivity for dopamine D2-type receptors such as ropinirole, may be a preferable choice vs apomorphine.

Inducing emesis in cats may be more difficult. Dexmedetomidine is the best option,8 and although the ideal dose and route of administration have not yet been established, 7 to 10 µg/kg intramuscularly is suggested. Activated charcoal can be administered to cats with normal mentation at a dose of 2 to 5 g/kg. It is better to use products containing sorbitol, a cathartic that can decrease toxin absorption and increase evacuation time. Repeat dosing of activated charcoal has not been shown to reduce absorption, but it has not been investigated thoroughly.

Cyproheptadine, a direct serotonin antagonist, is indicated in cases of suspected serotonin syndrome and can also be considered in any SSRI/SNRI intoxication case. Dogs should receive 1.1 mg/kg and cats, a total of 2 to 4 mg. Cyproheptadine (crushed and mixed with saline) may be administered every 4 to 6 hours orally or rectally. It is very helpful for patients with protracted vomiting or neurologic impairment.

Symptomatic care is of the utmost importance. Many intoxicated patients experience significant fluid loss owing to vomiting, diarrhea, and hypersalivation or to the sorbitol found in activated charcoal. Hypovolemia may be treated with isotonic crystalloid fluids as boluses of 10 to 20 ml/kg over a period of 15 minutes. For dehydration, the dose of crystalloid solutions should be calculated according to the formulas shown in the Figure.

Vomiting can be treated with an antiemetic like maropitant (1 mg/kg IV or SQ q24h), ondansetron (0.2 to 1 mg/kg IV q8-12h), or a combination thereof. If patients continue to vomit despite treatment and experience CNS depression, intubation may be required to protect the airway. Suctioning of the oral cavity should be performed as needed in these patients.

SSRI/SNRI toxicity causes diarrhea because these agents stimulate the enteric nervous system. Diarrhea should be addressed by replenishing fluid levels. Antibiotics like metronidazole are not indicated and can contribute to gut dysbiosis.9

Hypertension can result in ocular, cardiac, renal, and cerebral damage and should be treated, especially when systolic pressure is > 180 mm Hg. Oral amlodipine at doses of 0.05 to 0.2 mg/kg in dogs and a total of 0.625 to 1.25 mg in cats may be given to animals able to take medications by mouth. Otherwise, or if hypertension is severe (systolic blood pressure >200 mm Hg), antihypertensives like hydralazine should be administered intravenously at 0.25 to 2 mg/kg q12h. If hypertension occurs along with tachycardia, beta blockers like propranolol (0.04 to 0.1 mg/kg IV q8-12h in dogs and 0.02 to 0.06 mg/kg IV q8-12h in cats) can reduce heart rate and blood pressure.

Seizures can be treated with benzodiazepines (diazepam or midazolam at 0.5 mg/kg IV) and levetiracetam (30 to 60 mg/kg IV followed by 30 mg/kg IV q8h). If seizures recur, a constant rate infusion of a benzodiazepine may be required. In severe refractory cases, phenobarbital or propofol may be necessary.

Clinical signs do not typically persist beyond 24 to 36 hours, and the long-term prognosis is excellent. Factors affecting recovery include aspiration pneumonia, severe seizures (resulting in brain injury), and severe hypertension (resulting in end organ damage). SSRI/SNRI ingestion requires a visit to a veterinary emergency room for prompt assessment and decontamination. Educating owners—especially cat owners—about the risks of medication ingestion may help prevent these toxicities.

Performing and calculating a PCV 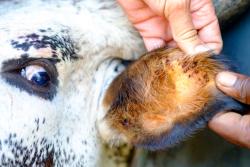 The pet obesity epidemic: are we loving our pets to death?
Advertisement