Spooky toxins to bear in mind

According to Pet Poison Helpline, chocolate is typically the most common toxin and No.1 threat for pets during Halloween season. However, Pet Poison Helpline is also bringing awareness to other spooky season toxins. In a release,1 the organization explains recent cases they received displaying how spider and snake bites can pose threats to pet health.

In one case, a dog, Wiley, was outside his home in Iowa when he was bitten by a rattlesnake. “We live in the country near a limestone quarry, so we are aware that snakes are a concern,” said Lisa Brovold, whose dog Wiley was bitten, in the release. “Wiley is usually very good about going outside by himself, but we heard him barking strangely and suspected immediately what had happened. I had heard what I thought was cicadas making noise in the driveway, but it turned out to be a timber rattlesnake. Wiley must have run by it on his way to relieve himself and he was bitten.”1

“It was after hours on a weekend, and I knew our regular vet in West Des Moines was closed,” Brovold explained. “The first thing I did was Google ‘poison hotline,’ which turned out to be for humans. They gave me the number for Pet Poison Helpline. I also called a veterinarian in our county who would more likely have experience with rattlesnake bites. He recommended that we take Wiley to an emergency veterinary hospital in Des Moines about 45 minutes away. I called and let them know what happened and when we would arrive. By the time we got there, the veterinarian and Pet Poison Helpline toxicologists were developing a treatment plan.”1

According to Pet Poison Helpline, clinical signs of rattlesnake bites include acute difficulty breathing, blood clotting abnormalities (resulting in bruising and bleeding), abnormal breathing (due to fluid shifts to the lungs and pericardial edema), dermal injury (resulting in tissue sloughing), cardiovascular shock, and even organ failure.1 Wiley was given strong pain medication, IV fluids, liver protectants and antibiotics. The hospital did not have antivenin available, but Wiley was able to make a full recovery thanks to the supportive care he received the following two days. He was then sent home with antibiotics, pain medication and liver protectants.

Black widow spiders (Lactrodectus spp), which are found throughout North America (except for Alaska), are poisonous to dogs and cats. Female black widow spiders typically are 2-2.5 cm in length, black, shiny, and have an orange or red hourglass mark on their underside. Immature females are brown in color, and the hourglass shape darkens with age. Males are brown and lack the hourglass mark and are generally considered non-toxic due to the small size of their fangs, preventing them from having a large bite. These spiders carry a potent venom which is a neurotoxin (a-latrotoxin). Dogs and cats bitten by black widow spiders may show clinical signs of severe muscle pain, cramping, walking drunk, tremors, paralysis, blood pressure changes, drooling, vomiting, diarrhea and death. Treatment includes the use of an antivenom, IV fluids, anti-seizure medications, pain medications and symptomatic supportive care.1

“Spider bites are not only dangerous to humans, but to our pets as well,” said Renee Schmid, DVM, DABT, DABVT, a senior veterinary toxicologist at Pet Poison Helpline. “We recently received a call from a veterinarian in Santa Fe whose feline client, Hobbes, had encountered a well-known creepy crawler. The cat’s owner found him howling, with flaccid paralysis and tremors, next to the remnants of a black widow spider.”

She continued, “Once at the hospital, his condition worsened, and he began to vomit and have seizures. Although they could not find an actual bite wound or swelling in the mouth, Hobbes was showing signs of being bitten by a black widow spider. Fortunately, the hospital was able to locate the appropriate antivenin and administered two doses intravenously. Hobbes was also given diazepam and methocarbamol to help with muscle spasms, tremors and seizures. He responded extremely well to his treatment and has made a full recovery.”1 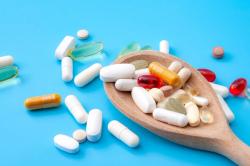 The risk human medication can pose for pets 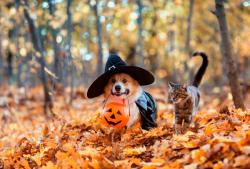