This ecosystem is initially established during birth and continues to develop during suckling. The impact of the intestinal microbiota and the bacterial ecosystem has been well established by studies in germ-free rodents. These rodents show a wide variety of morphological and physiological alterations that overall equate to a state of compromised intestinal function and immunity. In healthy animals the physiologic microbiota, and most prominently the bacterial ecosystem, has several important functions. Firstly, it protects the host against pathogenic bacteria, by competing for oxygen, luminal substrates, and space, but also by synthesizing and releasing substances that inhibit bacterial growth, so-called bacteriocins. Intestinal bacteria also produce short-chain fatty acids by metabolizing dietary components that are often non-digestible for the host. In turn, these short chain fatty acids serve as an important energy source for the intestinal mucosa, leading to epithelial cell proliferation and mucosal growth. Members of the intestinal bacterial ecosystem also synthesize a variety of vitamins, including riboflavin (vitamin B2), biotin (vitamin B7), folic acid (vitamin B9), cobalamin (vitamin B12), and vitamin K. It is important to note, however, that physiologically, the synthesis of some of these vitamins, for example cobalamin, is not of any significance to the host as the synthesis may occur distally to where the vitamin can be absorbed. Finally, intestinal bacteria also play a crucial role in the development of the intestinal immune system. They stimulate said intestinal immune system, which plays a crucial role in overall host defense throughout all stages of life.

Impact of the microbiota and intestinal bacterial ecosystem on gastrointestinal health

It has long been known that some dogs and cats with acute or chronic diarrhea respond to antibiotic therapy. While some of these patients may be infected with a primary gastrointestinal pathogen, such as Salmonella spp. or some pathogenic Campylobacter strains, a specific causative organism can't be identified in most of these patients. A variety of names have been associated with this condition, including small intestinal bacterial overgrowth, antibiotic-responsive diarrhea, and tylosin-responsive diarrhea. Regardless of the term used for describing this condition, a response to antibiotics would suggest that these patients have an alteration of the intestinal bacterial ecosystem that leads to diarrhea and that modification of the intestinal bacterial ecosystem can lead to improvement of clinical signs. Some prebiotics and antibiotics have been used to treat these dogs, but probiotics should be considered a far more physiologic approach to treating these patients.

It is important to note that the effects of the intestinal microbiota reach further than just a direct effect of bacteria causing clinical signs. For example, in a recent study the diversity of the small intestinal microbiota was far less in dogs with inflammatory bowel disease than in healthy dogs. This would suggest that the makeup of the intestinal microbiota has an impact on the inflammatory state in the GI tract. Furthermore, adjustments in the intestinal microbiota may be able to prevent or reverse this inflammatory state and thus be able to ameliorate clinical signs in dogs with gastrointestinal disease. Simplistically, the mucosa of the gastrointestinal epithelium has only a limited number of adhesion sites to dendritic cells. Pathogenic bacteria adhere to these dendritic cells and their antigens are being presented to immune-modulating cells in the Peyer's patches. In the case of pathogenic bacteria this leads to the release of proinflammatory cytokines and an inflammatory response. In contrast, when bacteria belonging to the physiologic bacterial ecosystem adhere and their antigens are being presented to immune-modulating cells, the release of proinflammatory cytokines is being curbed.

Probiotics have garnered a lot of interest in both human and veterinary medicine. Initially, probiotics were mostly embraced by holistic physicians and veterinarians and the expectations for probiotics were dramatic, with probiotics being hypothesized to be of benefit in disorders ranging from stress to gastrointestinal health, weight management, and even the prevention of cancer. These unrealistic expectations have been replaced with well-defined requirements for probiotics and controlled studies of their beneficial effects.

In a recent study, 8 veterinary and 5 human probiotics were evaluated and only 2 of the 13 products contained the strains and concentrations of those strains indicated on the label. Several of the products contained bacterial species that could potentially act as pathogens. Thus, in order to ensure safety, the probiotic product should adhere to strict production and storage requirements. The probiotic also must be stable throughout transport and storage until the product is being administered by the pet-owner. In order to ensure that a certain number of colonies are administered to the patient, the colonies in the product should neither proliferate nor die. Finally, a probiotic must be efficacious. In order to be efficacious, the bacteria must reach the intestinal lumen. This requires that the bacterial species being used in the formulation are both acid- and bile-acid-resistant. Also, the bacterial species of the probiotic preparation should adhere to the intestinal mucosa to prolong the time of interaction. Finally, the presence of the probiotic species must have beneficial effects in the host. Several controlled studies have been conducted in dogs that also show that certain probiotics carry health benefits in dogs with gastrointestinal disorders.

In humans many patients with acute diarrhea benefit from probiotics. Similarly, in one study of dogs with stress-induced diarrhea, treatment with Bifidobacterium animalis AHC7 led to resolution of diarrhea significantly faster than in dogs not treated with the probiotic. Acute diarrhea occurs frequently in dogs. In puppies, parvovirosis is a common cause of acute diarrhea, but even vaccinated adult dogs may have acute diarrhea due to parvovirosis. Thus, all dogs considered at risk for parvovirosis should be tested. Other possible etiologies are a variety of secondary causes of diarrhea, such as hypoadrenocorticism, acute renal failure, and, less commonly, acute hepatic failure and infectious, mechanical, or less commonly toxic conditions. A basic work-up should include a complete blood count, serum biochemistry profile, and urinalysis to rule out some of the secondary causes of the diarrhea. Survey abdominal radiographs should be taken to rule out a mechanical etiology. If a patient also shows vomiting, a SNAP cPLTM should be performed to rule out acute pancreatitis. If no specific diagnosis can be made, the patient is systemically stable, and the condition does not worsen, management with supportive care is sufficient in most cases. Also, if the patient does not vomit, a probiotic can be added to the treatment protocol to speed up recovery.

It should be mentioned that patients with severe acute diarrhea, such as parvovirosis may or may not benefit from a probiotic. In a recent study of humans with acute pancreatitis, patients that were treated with a probiotic had a worse outcome than those patients not treated. One possible explanation for this observation was translocation of the probiotic bacteria, though this hypothesis was not further explored by the investigators. However, based on this study, it would appear prudent not to treat patients with a severely compromised intestinal mucosa with a probiotic until specific studies in dogs have been conducted that would demonstrate the safety of probiotic use in this patient group.

Chronic diarrhea is also a common reason why dogs are presented to a veterinarian for assessment and care. In general, there are many different reasons for chronic diarrhea in dogs. A comprehensive clinical history and a thorough physical examination are crucial for arriving at the most appropriate diagnosis. Also, each dog should be evaluated for a possible infestation with gastrointestinal parasites and, if none are identified, treated with a broad-spectrum anthelminthic agent. To rule out secondary causes of chronic diarrhea a complete blood count, serum chemistry profile, urinalysis, and measurement of serum trypsin-like immunoreactivity (cTLI) and pancreatic lipase immunoreactivity (Spec cPLTM) concentrations are warranted. Also, serum folate and cobalamin concentrations should be measured to better characterize the disease process. If no specific underlying cause can be identified and the patient is stable a variety of treatment trials can be undertaken, including dietary trials, antibiotic trials (the author recommends tylosin at 25 mg/kg q 12 hrs), or a probiotic agent. If the patient does not respond further diagnostics are needed to try to identify the definitive cause for the clinical syndrome. However, it is important to point out that probiotics may not only be warranted in canine patients with non-specific chronic diarrhea, but may also be a viable treatment option for dogs with evidence of an alteration in the intestinal bacterial ecosystem (e.g., as evidenced by an increased serum folate concentration) or even inflammatory bowel disease (IBD).

Two studies have shown that Bifidobacterium animalis AHC7 is efficacious in preventing stress-induced diarrhea. Thus, dogs that have a history of stress-induced diarrhea are ideal candidates for preventative use of a probiotic agent. Ideally, the probiotic should be started a few days before the stressful event and should be continued for several days after the stressful event. 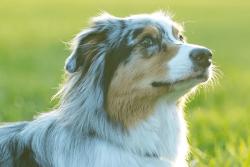