Allison Watson, DVMOsteolytic lesions are characteristic of multiple myeloma and are seen in more than 50% of dogs with the IgG and IgA classifications.1,2 Grossly, multiple myeloma appears as dark red to brown, gelatinous masses replacing bone and marrow, usually in multiple locations. Commonly affected sites of osteolysis include the vertebrae, ribs, pelvis, skull and proximal metaphyses of long bones (Figures 11 and 12).3 Lysis and proliferation of the tumor within vertebral bodies can cause extradural compression of the spinal cord, as seen in the current case (Figure 13).4,5 Further dissemination can occur and affect the spleen, kidney, liver and lymph nodes (Figure 14).1

Figure 11. Necropsy image from the dog in the current case. Dark red to brown, gelatinous masses replace the bone within multiple vertebral bodies and spinous processes (arrows) of the lumbar vertebrae.

Figure 12. Necropsy image from a different patient with multiple myeloma. There is a focal, discrete, dark red, soft mass in the bone marrow of a long bone.

Figure 13. Necropsy image from the dog in the current case. A soft, dark red mass in vertebral body of L5 is compressing the spinal cord.

Figure 14. Necropsy image of multiple myeloma affecting the spleen of another patient. When evaluating a biopsy or tissue at necropsy, plasmacytosis in bone marrow is the diagnostic criterion used by anatomic pathologists. A section of bone marrow that is more than 30% plasma cells with concurrent osteolytic bone lesions, monoclonal gammopathy or Bence Jones proteinuria is highly suggestive of multiple myeloma.4 Changes in plasma cell morphology, such as binucleation, multinucleation and variation in cell or nuclear size (anisocytosis and anisokaryosis, respectively) are also suggestive of multiple myeloma.5 Immunohistochemistry may be used to confirm the identity of the neoplastic plasma cells and to better estimate the percent of plasma cells within bone marrow. Canine plasma cells are immunoreactive for multiple myeloma oncogene 1 (MUM1) with strong nuclear and weak cytoplasmic immunoreactivity.6 Immunohistochemistry may also be used to match either IgG or IgA to the clinically diagnosed monoclonal gammopathy.1

There are four described histologic patterns of neoplastic cells in canine bone marrow: focal, interstitial, mixed and packed.7 The interstitial pattern spares the fat and hematopoietic cells, while the packed pattern replaces fat and hematopoietic cells within the bone marrow. The mixed pattern is a combination of interstitial and packed. The packed pattern is associated with increased mitotic rate, as well as decreased survival time in dogs with multiple myeloma.7

In the current case, the histologic appearance of the bone marrow was consistent with a packed pattern, with sheets of neoplastic cells obliterating normal bone marrow elements (Figure 15). The neoplastic cells resembled normal plasma cells (round, eccentric nuclei, moderate eosinophilic cytoplasm and perinuclear clearing) and had mild anisocytosis and anisokaryosis, with seven mitotic figures per 10 high-power (400X) field (Figure 16).

Figure 15. Biopsy image from the dog in the current case. Sheets of neoplastic cells (right side of image) are in a packed pattern, replacing the normal bone marrow (*) (20x magnification, hematoxylin and eosin stain). 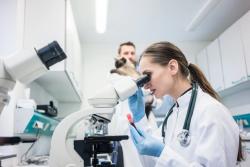 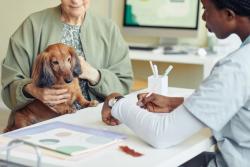