How to introduce a new idea to your boss

Have you had bad experiences trying to get your veterinary practice owner or manager or team lead to try something new? Youre not alone. See if any of these tips about organizing your pitch help in your next move to improve things at your veterinary hospital.

"So, as you can see here, the higher the stick I find, the more profits increase at this hospital. So my suggestion for three-times-daily runs around the lake with all that driftwood is clearly a win-win for us, boss." (adogslifephoto/stock.adobe.com)Introducing a new idea to your boss can be an intimidating, nail-biting event-especially if you're facing a hospital mantra of “But that's how we've always done it.”

But don't be discouraged! Exploring new ideas and creating new standards is what separates good (or bad) hospitals from great ones. It's people like you-willing to take a risk and try something new-who make great employees and key players at veterinary hospitals. Here is my no-fail guide on how to introduce a new idea to your boss.

Haven't we done this before … ?

First, it's important to find out if the idea has been tried before-even if it was before you started. Ideas in the veterinary profession tend to circle back over time much like the fashion industry. Take the time to ask around and see if your idea has already been tried and failed in the past. If so, find out why, so you can decide whether there's a good reason (or many!) to try again. And be honest with yourself: You may see some problems in your idea you didn't see before and decide that it isn't worth trying at this time.

Case study in introducing new ideas like a boss

• Deeper details. “I've researched three mobile apps on the market by looking at their websites and had a demo with one of them. It looks like this is something that could really help our practice.”

• Cost. “The app costs $X, but billing doesn't start until one month after the app is live if we sign up in the next three days.”

• Time commitment. “There's no contract or penalties. You can cancel anytime.”

• Leadership. “I've talked to a few of the team members at the front desk, and three of us have agreed we're willing to oversee the implementation and train our coworkers as needed. We would love to test it out and see what our clients think.

• Success benchmarks. “The app dashboard has metrics, and we can monitor what percentage of our clients use the app, and we can track orders and appointment requests. I'd like to see three to five phone calls per day for appointments moved from the front desk to the app, and in a few months that would likely be even higher.”

• Failure benchmarks. “If we try the app for three months and clients don't like it or use it, we'll be able to see that information in the dashboard reports. Then I'd recommend we cancel the service.”

• Benefits. “Because 77 percent of Americans have a smartphone, it's very likely clients will use our app to order refills and request appointments, which means we would have less phone calls to answer and more time to help our clients in the clinic. We would also find it less stressful if the phone wasn't ringing constantly. Also, with the push notifications we can help our clients remember to give their pets monthly heartworm prevention. Ultimately, I think we can strengthen the bond with our clients and help our patients get better care.”

• Provide references. “I hope it's OK, but I've already contacted a few other clinics using this service, and here's what they had to say … ”

The worst thing you can do is to approach your boss with a half-baked idea. Keep in mind that it's very unlikely they've been thinking about your idea at all, while you've been busy thinking about how great it is and planning how it could work in your head for weeks or months. Your plan should include the following basics to show your boss how prepared and serious you are:

• Deeper details. If you're thinking of adding a product or service, talk to the company to learn more before approaching your boss. At the very least, do some preliminary research especially if there are multiple providers on the market.

• Cost. Know how much it will cost for everything in your plan prior to bringing up your idea.

• Time commitment. Show how much time it'll take to get your new idea launched and how long until it's up and running and showing results.

• Leadership. Identify who's in charge ahead of time. Who's willing to champion or be involved with the new idea?

• Success benchmarks. Identify how you'll know if your idea is working. It's best to have measurable indicators you can track and analyze over time.

• Failure benchmarks. How will you know it's not working? Not every idea is a winner, and your boss knows that. Before you start, identify how you'll tell if the idea doesn't work. This ensures everyone is on the same page down the road about what constitutes success or a friendly, “Well, we tried.”

• Benefits. This is the most important part of your presentation to your boss. Make sure you're clear on the benefits-why you want to introduce this change into your current systems. Maybe the “why” is to strengthen the bond with clients or improve the number of patients getting heartworm preventive.

• Provide references. If the new idea is so great, chances are that other people are already doing this at their practices. Call up a few and get some references and success stories to share.

• Be enthusiastic. Really, what you're trying to spread is enthusiasm, which tends to be infectious for most people. Show your boss you're excited to bring this new innovation to the business.

• Show your commitment level. Let your boss know you're in it to win it and that you aren't going to dump this in someone else's lap down the road. Ask your boss to take a chance on you with the reassurance that if this idea fails, it won't be for lack of effort.

• Understand the WIIFM. Everyone on the planet interprets ideas by immediately asking themselves in their head, “What's in it for me?” When you can put yourself in the shoes of your boss and identify ahead of time what the boss's WIIFM is, you can more easily address anticipated concerns. Hardly anybody is going to get excited if your idea means they'll have more work for no more benefit. The more directly you can show how the boss will benefit, the more likely your boss will say yes. (P.S. This applies to any new idea you're trying to share in any aspect of life.)

Can you start with baby steps … ?

• Start with a trial. If you sense the boss isn't going for it, change your strategy to ask for a trial period, like three or six months. The word “trial” sounds less scary than “contract” and will allow your boss to have a few options other than just yes or no.

I've been a boss for most of my veterinary career, and the one thing any boss loves is when employees are excited and engaged in the business. I can't think of any boss who'd say no to an approach like the one above-unless they had a good reason.

What's the next step? Once you get the boss's sign-off, it's time for the team. Watch for my next installment here on dvm360.com in the near future where I cover the basics of introducing your new idea to the staff.

Dr. Stacee Santi graduated Colorado State University in 1996 and began her veterinary career in Portland, Oregon, at a 13-doctor ER hospital. In 2013, Dr. Santi founded Vet2Pet and began working on new contemporary strategies to connect with clients-the first being a custom veterinary app. 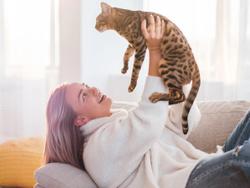 Global research confirms the strong bond between people and pets

The secret to retaining veterinary technicians