How you can help affected pets before things take a turn for the worse.

Gastric dilatation-volvulus (GDV) is an acute medical and surgical condition caused by several pathophysiologic effects that occur secondary to gastric distention and malpositioning.

It is unknown if volvulus of the stomach occurs before dilatation or vice versa. Volvulus could occur first since it has been documented in some patients without gastric dilatation. Hepatogastric ligaments have been found to be significantly longer in dogs with GDV.1 With the elongation or stretching of the hepatogastric ligaments, the stomach can twist, which shows that volvulus could occur first. Volvulus will result in occlusion of the lower esophageal sphincter and the pylorus. Thus, dilatation will occur because of the fermentation of gastric content.

Gastric dilatation has been diagnosed in dogs without volvulus and in dogs that have had a gastropexy. Aerophagia is then the major cause of dilatation. When intragastric pressure increases, it likely compresses the lower esophageal sphincter against the diaphragm and interferes with its opening. Intragastric bacteria and bacterial fermentation result in further gastric distention. The distended stomach can then rotate since the hepatogastric ligaments are stretched.2-4

Although acute GDV has been recognized for many years in dogs, its exact cause is still not clearly understood—only risk factors have been identified:

The stomach moves in a clockwise rotation. Displacement of the pylorus occurs from the right side toward the ventral midline. It passes over the fundus and body to the left abdominal wall close to the lower esophageal sphincter. At the same time, the fundus goes in a ventral direction toward the right abdominal wall. The pyloric antrum ends up in a dorsal position on the left side. Because of the attachment of the omentum to the greater curvature of the stomach, the omentum covers the stomach after volvulus.

The displacement of the spleen may be related to the degree of volvulus. The spleen is usually engorged or can undergo torsion on its own pedicle. Thrombosis of the splenic artery can also occur. Usually, 180 degrees of stomach rotation is seen, but 360-degree rotation is possible. Counterclockwise rotation is not really possible, or it is limited to 90 degrees since the pylorus cannot move dorsally in the abdominal cavity.

Mechanical limitation of diaphragmatic movement by a dilated stomach and decreased pulmonary compliance results in respiratory dysfunction. Tissue hypoxia results from decreased cardiac output and respiratory impairment. Increased gastric intraluminal pressure, portal hypertension, and venous stasis with thrombosis cause gastric mucosa stasis, hypoxia, and edema. Gastric wall necrosis can then develop in the fundus along the greater curvature. Because of distention of the stomach, vascular wall disruption causes mucosal hemorrhage. Avulsion of branches from the short gastric arteries during rotation of the stomach contributes to blood loss, hypovolemia, and restriction of blood flow to the stomach.

Dogs with GDV are usually presented for evaluation of unproductive vomiting, retching, hypersalivation, and a distended abdomen. They have progressively distending and tympanic cranial abdomens, and they may be restless. As the severity of the distention increases, the dog can become weak, laterally recumbent, and tachypneic.

Dogs with mesenteric volvulus also present with severe abdominal distention. Usually, these dogs are in a lot of pain and deteriorate rapidly in severe septic shock.

GDV is often diagnosed based on a patient's history, signalment, and physical examination results. Radiographic evaluation is required to confirm the diagnosis.

GDV is most commonly seen in large- and giant-breed dogs. It can also be seen in small dogs and cats. Dogs from 10 months to 14 years old have been affected. No sex predilections have been demonstrated.

On physical examination, it is classic to find a large distended abdomen. On percussion, a tympanic sound is produced. Abdominal palpation may be uncomfortable.

Patients with GDV progress through different degrees of shock that need to be recognized during the patient evaluation. First, animals early in the syndrome present with clinical signs similar to those of hypovolemic shock because most of their blood volume is restricted in the caudal vena cava and the portal vein. Thus, animals will exhibit:

With progression of the syndrome, patients will go into endotoxemic shock and will experience:

Finally, patients will decompensate and exhibit:

Lactate is produced as a by-product of anaerobic metabolism and has been shown to be elevated in animals with GDV.17,18 In one study, a lactate concentration < 6.4 mmol/L at presentation, a decrease of lactate of 4 mmol/L or more after fluid treatment and decompression, or a decrease in lactate of > 42.5% of the original value after fluid treatment and decompression was associated closely with survival.18

Radiography can help to differentiate between gastric dilatation and GDV. If radiography is necessary to determine the diagnosis, do not perform it until the patient is stable.

Since the pylorus is displaced on the left side of the abdominal cavity in a dorsocranial position to the fundus, right lateral recumbency radiography is required to be able to obtain the diagnostic double bubble image (Figure 1). The two bubbles are caused by the accumulation of air in the pylorus and the fundus. Free gas is present and may be seen in the abdomen when the stomach has ruptured.

1. A lateral radiograph of a dog in right lateral recumbency. The double bubble image of the stomach is characteristic of GDV.

If gastric dilatation is present without volvulus, radiographs show a dilated stomach with dilated loops of jejunum.

Place venous catheters of the largest gauge possible in the cephalic veins or jugular vein to deliver shock doses (90 ml/kg) of intravenous fluid. Deliver isotonic fluids in increments of one-fourth of the shock dose, and evaluate the patient's response after each one-fourth bolus. Adjust the rate and volume of fluids administered according to the assessment of several clinical parameters: heart rate, pulse, mucous membrane color, capillary refill time, and central venous pressure. Colloids at a dose of 4 ml/kg are recommended during hypovolemic shock treatment.19 Blood gas and electrolyte evaluations are required before acid-base and electrolyte imbalance corrections are attempted. A dog presented with a GDV can be either alkalotic or acidotic, hypokalemic or normokalemic.14

Gastric decompression is attempted first with an orogastric tube after initiating fluid therapy. The amount of gastric distention, the patient's level of compliance, and the degree of volvulus are factors that contribute to the ability to pass the tube. The difficulties or easiness of passing the tube does not have a diagnostic value for the magnitude of the volvulus. Perforation of a compromised stomach can happen with placing an orogastric tube, but measuring from the chin to the xiphoid before introducing the tube may help prevent stomach perforation (Figure 2). To help intubation, it may be beneficial to stand the dog on its hindlimbs.

2. An orogastric tube is measured from the chin to the xiphoid.

If the intubation is successful, stomach lavage is required to empty the stomach. Evaluate the color and content of the fluid coming back after stomach lavage. Hemorrhagic fluid or black necrotic tissue fragments are indications of stomach wall necrosis.

Cardiac rhythm needs to be evaluated before surgery. Atrial fibrillation, supraventricular tachycardia, and ventricular tachycardia are the most common arrhythmias associated with GDV.9,15,20,21 Usually the arrhythmias occur postoperatively. Correction of acid-base imbalances might help correct the arrhythmias. A blood gas analysis will be required to understand the acid-base status of the patient since dogs with GDV can be acidotic or alkalotic.14

Surgical intervention is required after the patient is medically stabilized and is recommended as soon as possible.15 Delayed surgery increases the potential for gastric wall edema and necrosis and venous stasis, especially if the stomach is rotated 360 degrees. If the surgery is delayed, cardiac arrhythmias can develop. Most dogs that have arrhythmias develop them within 36 hours after the gastric dilatation episode.

The purpose of this surgery is to derotate the stomach, evaluate the stomach wall and spleen for ischemic injury, and perform a gastropexy.

To begin the surgery, place the dog in dorsal recumbency, and perform a midline celiotomy. The surgeon should stay on the dog's right side. Upon opening the abdominal cavity, omentum will be covering the stomach, which confirms the GDV diagnosis. The stomach can be decompressed again before derotation with a large orogastric tube. After identifying the pylorus and the fundus, grasp the pylorus with your right hand and pull it ventrally toward the abdominal incision while pushing the fundus dorsally into the abdominal cavity with your left hand.

The spleen follows the motion of the stomach. If splenic torsion is present, perform a splenectomy without untwisting the vascular pedicle.

After derotation, evaluate the stomach and spleen for ischemic injuries. Usually, the spleen shows signs of venous congestion that resorbs quickly after derotation of the stomach. Splenectomy is indicated if thrombosis of the splenic artery is present.

Evaluating gastric wall perfusion is difficult. About 20% of dogs with GDV have a devitalized gastric wall requiring gastrectomy.15 Ischemic injury occurs most commonly in the fundic area along the greater curvature. No objective criteria exist to evaluate the gastric wall. The absence of a peristaltic wave, a pale greenish-to-gray serosal color, a thin gastric wall, the absence of the slipping of the mucosa and submucosa when tested, and lack of bleeding after a partial thickness incision are signs of gastric wall devitalization (Figure 3).

3. Necrosis of the body of the stomach along the greater curvature. The dark color and absence of peristalsis are two criteria used to evaluate the stomach wallâs viability. The absence of the slipping of the mucosa and submucosa is another criterion.

Pack the stomach off from the abdominal cavity with moistened laparotomy sponges. Retract the healthy stomach with stay sutures to prevent gastric spillage.

If a suture technique is used, ligation of the branches of the short gastric arteries and left gastroepiploic artery supplying the area is required. Resect the necrotic gastric wall with Metzenbaum scissors to the level of healthy gastric tissue. A two-layer closure with a continuous inverting suture pattern using 3-0 absorbable monofilament suture is necessary to close the stomach. This technique has been associated with a 60% mortality.22

4A. Gastric necrosis occurs along the greater curvature of the stomach in the body and the fundus. Automatic stapling equipment assists in removing the necrotic section.

If autostapling equipment is available, a gastrointestinal anastomosis device (GIA 50—Covidien) or a thoracoabdominal device (TA 90—Covidien) can be used to perform the gastrectomy (Figures 4A & 4B). Advantages of this technique include decreased risk of abdominal contamination from gastric spillage and decreased surgical time. Mortality rate with the autostapling equipment is close to 10%.23 Stomach rupture is associated with severe peritonitis that would require appropriate treatment.

4B. A partial gastrectomy being performed by using automatic stapling equipment.

After gastrectomy, a gastropexy is required to stabilize the pyloric antrum on the right side of the abdominal cavity. Gastropexy substantially decreases the chance of recurrence—after a gastropexy, dogs can still dilate their stomachs but not rotate them.

After surgery, monitor the dog for arrhythmias, DIC, hypotension, and peritonitis. All these complications result from the pathophysiology of GDV.

Shock after surgery is usually caused by inappropriate treatment before surgery, blood loss during surgery, anesthesia effects, or fluid sequestration due to ileus. Septic shock can result from toxins and bacterial absorption from gastric mucosa necrosis and peritonitis.

Ventricular arrhythmias are common in patients with GDV, especially within 36 hours after surgery. They result from poor myocardial perfusion, ischemia, acidosis, an electrolyte imbalance, a thromboembolic event, or myocardial depressant factor. Treatment requires correction of acid-base and electrolyte imbalances and hydration. Lidocaine (2 to 4 mg/kg as a slow bolus given intravenously, followed by a constant-rate infusion of 50 to 100 μg/kg/min) is the drug of choice for the treatment of ventricular tachycardia. Hypokalemia, blood loss, and DIC need to be recognized and treated accordingly.15 Gastric rupture three to five days after surgery occurs rarely and is due to inappropriate assessment of the viability of the stomach at the time of surgery. Gastritis secondary to mucosal ischemia is treated with famotidine and sucralfate.

It is also recommended to feed dogs two or three times a day and not exercise dogs for one hour after feeding. 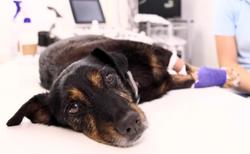 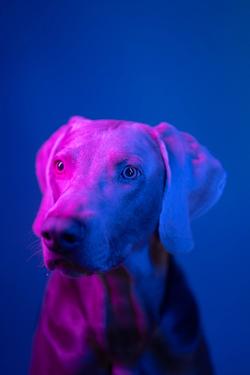 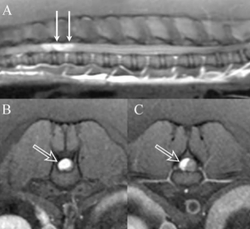