Owners and veterinarians often seek additional therapies for dogs with osteoarthritis that are safe and effective.

Owners and veterinarians often seek additional therapies for dogs with osteoarthritis (OA) that are safe and effective. Research has suggested that glucosamine and chondroitin sulfate have beneficial effects in patients with OA, and avocado/soybean unsaponifiables (ASU) benefit humans with OA. We evaluated the effectiveness of Dasuquin®, a nutritional supplement containing glucosamine, chondroitin sulfate, ASU, and green tea extract in dogs with stifle OA.

Eight hound-type dogs with induced chronic (> 5 years) OA of a stifle were given either a placebo or Dasuquin® for 2 weeks. After a minimum 4-week washout period, the groups were switched. The primary outcome evaluation was the measurement of ground reaction forces (force plate analysis). Clinical parameters were also evaluated, including lameness scores, pain on palpation, comfortable joint range of motion (ROM), and stride length.

In general, dogs receiving Dasuquin® had improvements in ground reaction forces (see graph below) after 2 weeks of treatment. Although the differences did not reach statistical significance because of small numbers, the consistent improvement with treatment and consistent deterioration with placebo suggest that dogs received benefit from Dasuquin®. In addition, the same dogs have been treated with a variety of nonsteroidal anti-inflammatory drugs (NSAIDs) in a previous study, using the same study protocols. Dasuquin® treatment resulted in an increase in peak vertical force similar to that obtained with NSAIDs.

These data suggest that Dasuquin® may be as efficacious as some NSAIDs in managing chronic OA in dogs, but without the adverse events often associated with these drugs. 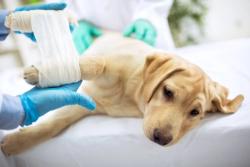 How 1 veterinarian built her practice around integrative medicine